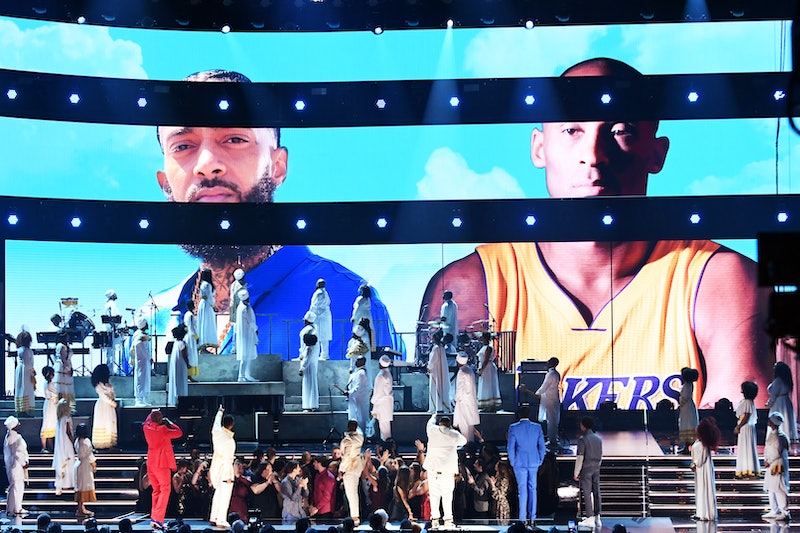 This year's Grammy Awards were an emotional one, as some of music's biggest stars celebrated their successes alongside the loss of basketball legend Kobe Bryant, who died in a helicopter crash earlier in the day. At the last minute he was included in a planned tribute to Nipsey Hussle at the 2020 Grammys that had the crowd and viewers on Twitter in their feelings. Introduced by Ava DuVernay, his closest collaborators and friends, Kirk Franklin, DJ Khaled, John Legend, Meek Mill, Roddy Ricch, and YG, performed the tribute at Sunday's Grammys ceremony.

Hussle, who was fatally shot in March 2019, won his first Grammy for Best Rap Performance with "Racks in The Middle" earlier in the evening off-air. (The track was also nominated for Best Rap Song, but lost to J. Cole for "A Lot.") His wife, Lauren London, accepted the award with him alongside his grandmother, brother, sister and daughter. "Nip did it not just for the awards but, for the people,” she said. “And God allowed him to speak his truth, give us wisdom and something that we will forever be able to live with," she said.

"Higher," which was performed as the tribute to the late rapper, also won a Grammy on Sunday near the end of the broadcast for Best Rap/Sung Performance.

The tribute began with an intro from Meek Mill and then the stage opened up to a chorus of singers, Legend on the piano and DJ Khaled performing "Higher." The other stars then joined the performance as footage of Nipsey's verse in the video played above the stage. It was a moving and emotional moment, for Nipsey fans and anyone else feeling the losses of the day. The performance ended with a huge picture of both Nipsey and Bryant on the screen, making it all the more poignant. “Long live Nip! Long Live Kobe! The marathon continues,” Khaled said to the crowd.

It was a sobering statement from Khaled, knowing that the two were good friends and beloved Los Angeles icons who did everything they could to give back to their communities and empower young children, whether it was through sports and education programs, music, or outreach to the homeless, among other forms of charity.

The 2020 Grammys tribute to Hussle marks the third main stage memorial led by Khaled since his fellow rapper and friend's death. He also honored Hussle with the help of Lil Wayne, Mill, SZA, Legend, and others during his musical guest performance on Saturday Night Live in May, and in June, he and Legend performed a tribute medley during the BET Awards with Marsha Ambrosius and YG.