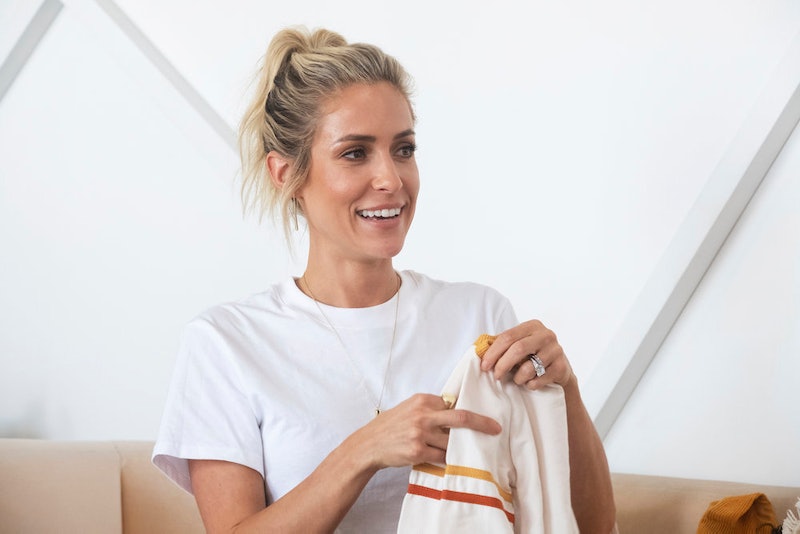 There are a lot of new updates to come on Season 3 of Very Cavallari, but the biggest, most surprising one is an impending feud between former best friends Kristin Cavallari and Kelly Henderson. In the season trailer, Kristin's good friend Justin Anderson sits down for a heated chat with Kelly. "Kristin didn't hear from you," he says. "I had my own sh*t going on," she replies, defensively.

Details around the breaking point of their relationship are unclear, and in her latest interview with E! News, Kristin said the show captures it all — no explanation needed. "It starts off pretty emotional, [you'll] see a fall out that I have with Kelly," she said. "It's very true to what I was going through in my life and even now, seeing it back—you know, having to relive it—is really tough for me."

The Uncommon James CEO continued. "I really do feel like the show is an accurate portrayal of what happened," she said. "You really kind of get the gist and I think it does a really good job explaining it."

Other teasers for the season see Cavallari in tears over the friendship. "She hasn't really been there for me," she says in one clip. "We aren't even speaking right now ... I don't know, maybe I'm just figuring out who my real friends are."

In a clip published on Wednesday, she vents to her husband Jay about the falling out over dinner. "All she cares about now is her own worth, publicly," Kristin tells her husband. She's convinced that the fame Kelly garnered through her appearance on Very Cavallari has taken a toll. "I'm probably ultra-sensitive to it because of Laguna Beach," she says. "It totally messes up friendships. I know that. That's why I was nervous going into it. But I thought Kelly was the last person to become affected. I've completely lost my friend."

Later, in a confessional, she referred to Kelly in past tense. "Kelly was my inner circle," she said. "She was one of my people. And so this has been really hard on me." She discusses the idea of meeting up with her to talk, but is afraid her emotions could interfere. "I'm really kind of hoping that we can come back around," she tells Jay.

So they might end up having a cordial meet-up at some point during Season 3. If they did, it may not have gone well, considering at the time of publication, neither Kristin's personal Instagram, nor the account for the show follow Kelly. Kelly's page, however, does follow them both.

Seasons 1 and 2 of Very Cavallari were filled with lunch and drink dates between the two friends. Now, Season 3 is expected to see a lot more of Kristin's long-time friend and celebrity hairdresser Justin Anderson and his boyfriend, Scoot. Especially because, surprise! They moved to Nashville.

"Wasn’t really supposed to say why i’ve been in Nashville for so long, but tonight the adventure begins and the secret is finally out on @eentertainment at 10/9 CT," Justin wrote on Instagram ahead of the airing of the Very Merry Cavallari Christmas special. "My long time best friend @kristincavallari and i finally spending time in the same city again has been the biggest treat of my adult life and i’m excited to share it with you all on @verycavallari." It's worth noting that Kelly wasn't a part of the Christmas special, either.

To promote the Season 3 premiere, Kristin shared a screenshot of a confessional she did with Justin on her Instagram Story. "See me and my bestie tonight on the premiere of @verycavallari," she wrote. For now, it looks like Kristin has officially moved on from Kelly. Or, they're really good at hiding their rekindled friendship for, you know, the drama.