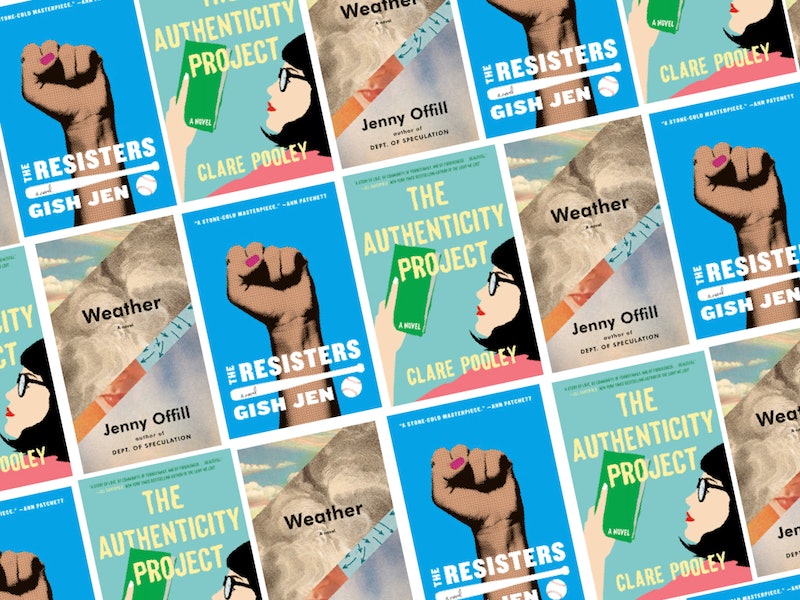 January has already swept out of our lives, which means it's time to take a look at what literary offerings February has in store for us. This month is packed full of must-read nonfiction, touching memoirs, the best genre fiction you could ask for, and plenty of great debuts. February might be the shortest month, but it's got plenty in store for you this leap year. Here's our list of most anticipated books of February 2020.

Perhaps the biggest book-related news of February is that readers will finally be able to get their hands on The Glass Hotel, Emily St. John Mandel's long-awaited follow-up to her 2014 breakout novel, Station Eleven. And Dept. of Speculation author, Jenny Offill, will also publish Weather, her highly anticipated third novel, this month.

Even if you've already put together your February TBR, or haven't finished reading all of January 2020's best new books, you owe it to yourself to check out these amazing reads. Presented for your reading pleasure, here are the 22 most anticipated books of February 2020:

Set in mid-1990s Lagos, Tola Rotimi Abraham's Black Sunday centers on twins Bibike and Ariyike, whose family is thrown into turmoil after their father makes a poor financial decision that results in the loss of their home. Living with their grandmother in the wake of the family tragedy, the once-close sisters begin to drift apart in this poignant debut.

Yes No Maybe So by Becky Albertalli and Aisha Saeed (Feb. 4)

Thrust together by circumstance, teen political canvassers Jamie and Maya take center stage in this exciting new YA romance from the authors of Simon vs. the Homo Sapiens Agenda and Amal Unbound. Painfully shy Jamie is happy to work on a local campaign, but being paired up with Maya — a Muslim girl having a very boring Ramadan — means he'll have to go door-to-door to solicit votes. But can two people so different ever make something work?

Black women's contributions to the United States' development are often left to the footnotes of history books. Daina Ramey Berry and Kali Nicole Gross uncover more than 400 years of black women's experiences in the U.S., from the traumatic to the triumphant.

You Never Forget Your First: A Biography of George Washington by Alexis Coe (Feb. 4)

We all have a particular image of George Washington as a commander and statesman, but who was he, really? Alexis Coe offers a fresh new glimpse at the first POTUS in You Never Forget Your First. It's not often that a presidential biography looks as enticing as this one, so pick it up before your bookstore sells out.

The Girl with the Louding Voice by Abi Daré (Feb. 4)

Nigerian teen Adunni dreams of getting an education, but her hopes are dashed when her father marries her off to a much-older man who already has two wives. She escapes for the city, only to find that the must support herself by becoming a domestic servant. Can Adunni ever hope to find her voice in a world that doesn't care about her?

The Resisters by Gish Jen (Feb. 4)

In the near future, the U.S. has fallen, to be replaced by AutoAmerica — a hypercapitalist hellscape operated by a self-aware, Big Brother-esque Internet. Half of the planet is underwater, and only white AutoAmericans live on the land that's left. Out on the water, an interracial couple give birth to an innately talented athlete, a daughter who attracts attention as the country ramps up to beat ChinRussia at the new Olympic games.

Actress Diane Keaton revisits her childhood and life with her beloved and troubled younger brother in this new memoir. Living a successful life that mirrored her brother's rocky path, Keaton questions what makes a person an outlier in Brother & Sister.

Imagine if The Sisterhood of the Traveling Pants were about a shared journal instead. In Clare Pooley's The Authenticity Project, six strangers each write down their own, honest stories in a single notebook. Originally picked up by an elderly man and left in a series of local gathering places, the notebook takes on a life of its own as it allows those who write inside it to bare their souls, anonymously.

The Small Backs of Children author Lidia Yuknavitch has a new book out this February. Verge is a collection of short stories that move between a mix of marginalized people living odd, stressful, and threatening lives. From a girl transporting organs throughout the Eastern Bloc, to a child who devises an 11th commandment to stop their bullying classmates.

Set in early-17th-century Norway, Kiran Millwood Hargrave's The Mercies centers on Vardø, a fishing village whose male population has been wiped out by a tragic storm. An exclusively female society for three years, Vardø's peace is upset when a minister set on whipping the women back into patriarchal shape arrives with his devoted wife.

Birch Hill was once a utopian community, but it has recently been reinvented as a school for gifted young ladies. As the headmaster's daughter, schoolteacher Caroline is partially responsible for overseeing the girls' well-being. But when a nosy student begins to exhibit strange symptoms — symptoms that extend to her classmates before eventually affecting Caroline herself — a creepy doctor's controversial treatments will force her to put her own life at risk to save her students.

Something That May Shock and Discredit You by Daniel M. Lavery (Feb. 11)

Daniel M. Lavery — formerly known as Daniel Mallory Ortberg — shines in this new collection of essays. The bestselling author of Texts from Jane Eyre and The Merry Spinster, Lavery combines memoir with pop culture criticism in his latest book.

In the Land of Men by Adrienne Miller (Feb. 11)

Adrienne Miller was the first woman to edit the boys' club magazine that is Esquire. Coming to power in the age of David Foster Wallace — who happened to be her good friend and great enemy — Miller was forced to blaze new trails as a woman in the literary sphere. Read her story in her new memoir, In the Land of Men.

Dept. of Speculation author Jenny Offill returns this year with Weather, the story of a real librarian, turned fake psychiatrist, and podcast communications handler. As she tries to assuage Internet strangers' fears, Lizzie realizes that her own relatives may be slowly slipping beyond her capacity to help.

The new book from Station Eleven author Emily St. John Mandel centers on a pair of estranged siblings, Vincent and Paul, whose messy lives result in Vincent's mysterious disappearance from a ship off the coast of northern Africa. The questions of who was responsible and how it all came to pass haunt this literary stunner.

Cassie knew that confronting the other woman's attacker would mean putting her life on the line, but she didn't know how far the would-be killer would go to punish her. When her husband disappears on Halloween night, Cassie can't be certain whether the man who threatened her on the side of the road — the man who stole her car and could steal her entire identity — is responsible for tearing her life apart. One thing is for certain, though: Cassie must act quickly if she wants to protect everything she loves.

The Good Girl author, Mary Kubica, has a sure-to-be-bestselling book coming out this February. The Other Mrs. follows the Fousts, Sadie and Will, as they move into his late sister's house to serve as a new family for their recently orphaned niece. Sadie isn't entirely comfortable with the arrangement, and she's begun to suspect that Will is having an affair with their new neighbor. When the other woman turns up dead, Sadie's world begins to crumble as the murder investigation spins closer and closer to home.

Of Curses and Kisses by Sandhya Menon (Feb. 18)

The first book in a new series from the author of When Dimple Met Rishi, Sandhya Menon's Of Curses and Kisses centers on Jaya Rao and Grey Emerson — two teens at the heart of a centuries-old family feud. When her sister is hurt by one of the Emersons, Jaya sets out to make Grey fall in love with her and then smash his heart to pieces. Can spite turn to love in this YA retelling of "Beauty and the Beast," or are Jaya and Grey doomed to follow a long tradition of unhappiness?

One of the year's buzziest debuts, Saint X follows Claire, a young woman haunted by her older sister's unsolved murder. When one of the original suspects in Alison's death comes waltzing into Claire's life, she becomes determined to track down the truth of that fateful night's events. But as she digs deeper into the mystery of Alison's murder, Claire comes to realize that she may not have known the other girl at all.

Dance Dance Revolution author Cathy Park Hong's new memoir confronts the tough questions of Asian American identity. Drawing its title from Hong's theory regarding the impact of racial stereotypes and lies on ethnic minorities, this memoir-in-essays is a must-read at a time of rising racist violence and distrust.

Hood Feminism: Notes from the Women That a Movement Forgot by Mikki Kendall (Feb. 25)

New from Amazons, Abolitionists, and Activists author Mikki Kendall, Hood Feminism takes white feminists to task for prioritizing a narrow platform over much broader issues like nutrition, housing, and education — issues that disproportionately affect queer women, women of color, and those living in poverty. This essay collection is sure to be one of 2020's most talked-about feminist texts.

Pretty as a Picture by Elizabeth Little (Feb. 25)

One of the year's most anticipated thrillers, Elizabeth Little's Pretty as a Picture centers on film editor Marissa Dahl, on-location in Delaware as part of a famous director's crew. The film they're shooting was inspired by a real-life murder, but a killer may be closer to the set than anyone wants to admit. As the cast and crew disintegrate over the strange and scary events surrounding them, Marissa falls in with a group of local teens who want to solve the real-life case behind the scenes, but can they find out whodunnit before it's too late?