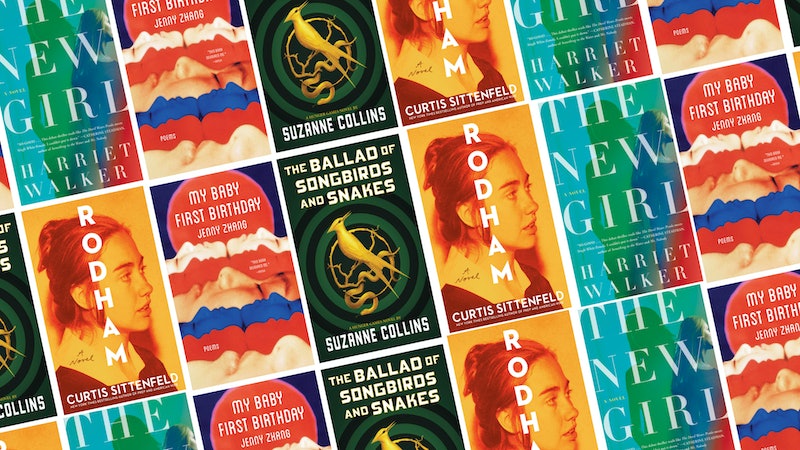 While the world appears to be at a standstill, the publishing industry is soldiering on, releasing a steady stream of incredible new books. May 2020 brings a good mix of debut writers and big-name authors to store shelves. With the Fire on High author Elizabeth Acevedo and Pride, Prejudice, and Other Flavors author Sonali Dev both have new books out this month, as do Porochista Khakpour, Curtis Sittenfeld, and Jenny Zhang. May also brings the long-awaited Hunger Games prequel from Suzanne Collins, which follows a teenage Coriolanus Snow as he mentors a District 12 Tribute for the 10th Hunger Games.

And that's just a taste of what May 2020 has in store for you. So clear your nightstand, sit back, and try to relax as you check out the full list of Bustle's most anticipated books coming in May 2020:

Clap When You Land by Elizabeth Acevedo (May 5)

Two sisters who have never met find themselves connected by tragedy when their father dies in a plane crash in this new novel from With the Fire on High author Elizabeth Acevedo. Clap When You Land follows Camino and Yahaira as they work through their grief — both from the loss of their loved one and from his newly discovered betrayal. Why did their father lead a double life for all those years, and, perhaps more importantly, how can having a sister change your life?

The Down Days by Ilze Hugo (May 5)

Inspired by the Tanganyika Laughter Epidemic of 1962, Ilze Hugo's The Down Days centers on Faith, a corpse collector working as a freelance investigator in the midst of a pandemic. When she's approached by Tomorrow, a orphaned girl looking for her baby brother, Faith can't help but take the case. As a new wave of hysteria-inducing illness begins to crest, Faith begins to suspect that Tomorrow's brother may not be missing at all. In fact, he may never have existed.

Close Up by Amanda Quick (May 5)

Set in 1930s California, Amanda Quick's Close Up follows Vivian, a photographer hired to document crime scenes, as she pieces together similarities between the deaths of the Dagger Killer's victims. Vivian's eagle eye may put her right in the murderer's sights, but she'll have a little help from Nick, a man with a strange knack for seeing the unseen.

Little Eyes by Samanta Schweblin (May 5)

From Fever Dream author Samanta Schweblin comes Little Eyes: an English-language translation of her 2018 novel, Kentukis. In a story more twisted than anything you've seen on Black Mirror, the world finds itself obsessed with a line of robotic pets that serve two functions: providing companionship to their owners and streaming their daily lives to other, voyeuristic users. As Little Eyes moves between lives and relationships shaped by the strange, little creatures, the tension ramps up, with the story slipping easily into Schweblin's signature brand of literary horror.

Almond by Won-pyung Sohn (May 5)

Born without the ability to experience emotions, Yunjae lives his life surrounded by cheerful reminders about how to interact with others, including what to say and how to look. When he suddenly finds himself alone in the world as a 16-year-old teenager, Yunjae is forced to seek solace in the most unlikely place imaginable: the shadow of his school bully.

All Adults Here by Emma Straub (May 5)

A mother of three grown children must come to terms with her own parental shortcomings in this new novel from Modern Lovers author Emma Straub. Astrid has always thought of herself as a good mom, but now, watching her children founder, she wonders where she might have gone wrong.

The Summer Set by Aimee Agresti (May 12)

Ten years after her Hollywood prime, actress Charlie finds herself back at the community Shakespeare theater where it all began for her, and that means being back in artistic director Nick's orbit. As sparks begin to fly between the two of them once again, Charlie starts to find her rhythm on the stage, only to become unmoored when a Hollywood hotshot rolls in and steals her thunder.

My Kind of People by Lisa Duffy (May 12)

The Salt House author Lisa Duffy returns to store shelves with this story of community, hope, and resilience. In My Kind of People, a man gains unexpected custody of his friends' 10-year-old daughter, prompting the close-knit Ichabod Island to come together to help him cope with his newfound fatherhood.

Catherine House by Elisabeth Thomas (May 12)

Going to college at Catherine House is an experience in and of itself. Secluded in a Pennsylvania forest, the school requires students to break all ties in order to enroll, in exchange for the prestige of being one of Catherine House's alumni. Hard-partying Ines thinks she's prepared to do the rigorous kind of study that the school asks of all its students, but as she steps into Catherine House's hallowed halls, she begins to realize that mere mystery may not be the only reason the college isolates its student body.

My Baby First Birthday by Jenny Zhang (May 12)

Sour Heart author Jenny Zhang is out with a new book of poems this year. My Baby First Birthday puts motherhood and womanhood under the microscope, examining parent-child relationships, both at an intimate level and from broader, more social perspectives. This is an arresting collection you'll want to read again and again.

The Language of Butterflies: How Thieves, Hoarders, Scientists, and Other Obsessives Unlocked the Secrets of the World's Favorite Insect by Wendy Williams (May 12)

You'll be hard-pressed to find someone who doesn't like butterflies, but how much do we really know about this fluttering insect? Wendy Williams' The Language of Butterflies is a social history of "the world's favorite insect," examining butterfly behavior and the creatures' place in our shared, global history and culture.

The Ballad of Songbirds and Snakes by Suzanne Collins (May 19)

Set during Panem's Dark Days, 64 years before The Hunger Games, this new prequel novel follows a teenage Coriolanus Snow as he mentors a District 12 Tribute — yes, that District 12 — for the 10th Hunger Games. Although fans already know that Snow's Tribute won't win the Hunger Games — that's an honor reserved for Griffin Naysmith of District 2 — The Ballad of Songbirds and Snakes will nevertheless provide insight into how and why the future-President Snow went on to rule Panem with an iron fist.

The Sunday Girl by Pip Drysdale (May 19)

After she's dumped by her boyfriend, Taylor hatches a revenge scheme like none other in Pip Drysdale's The Sunday Girl. Angus Hollingsworth has done her wrong, and well, he deserves whatever's coming to him. With a little help from The Art of War and a healthy dose of spite, Taylor's ready to bring him to his knees — until her plan veers swiftly off the rails.

Beach Read by Emily Henry (May 19)

In this fun, rivals-to-lovers summer romance, two writers facing career downturns challenge each other to a genre swap. For just this one summer, Augustus must write a happily ever after story, while January pens a literary bestseller. And here's the best part — they'll help each other finish the summer out with a worthy book under their belts. With all the stress of writing, it should be impossible for them to fall in love... right?

Brown Album: Essays on Exile and Identity by Porochista Khakpour (May 19)

Sick author Porochista Khakpour has a can't-miss book of essays out this May. Brown Album details Khakpour's immigration from Tehran to the U.S. at the height of the Iranian Revolution, her childhood in L.A., and her adolescent rebellion, which included moving to the other side of the country to find people who related similarly to the world around them.

Weird But Normal: Essays by Mia Mercado (May 19)

If you and your friends have ever remarked on the utter strangeness of life as Millennial women, you're going to relate hard to Bustle staff writer Mia Mercado's Weird But Normal. Navigating issues of race and gender in today's society, all with a hefty dose of levity, this book makes for a perfect weekend read as we move into summer.

Forced to close the fusion restaurant of her dreams, Lumi, a chef with the uncanny ability to detect emotions through food, takes a job working as a sous chef in Julien's traditional French eatery. Lumi hates her new boss with a passion, so much so that she refuses to eat anything he cooks. But when temptation finally gets the better of her, she discovers how Julien really feels inside...

Rodham by Curtis Sittenfeld (May 19)

Curtis Sittenfeld's new novel re-imagines Hilary Rodham's life, starting with her relationship to Bill Clinton. In Rodham, the eponymous heroine doesn't marry Clinton, and instead chooses a new life for herself, one that inevitably leads her to meet up with Clinton over and over again. An eye-opening look at the real-life Hilary Clinton's might-have-beens, Rodham will undoubtedly be on the tip of everyone's tongue this summer.

The New Girl by Harriet Walker (May 19)

In the debut novel from The Times fashion editor Harriet Walker, a woman takes maternity leave from her publishing job, only to find herself trapped in a web of paranoia verging on hysteria. Margot handpicked her temporary replacement, Maggie, but the new girl is just too good at her job. When an online harasser threatens to shatter Margot's carefully crafted persona, the stress of work, life, and loss build to a crescendo that leaves the new mother wheeling on the brink.

The Girl Next Door by Chelsea M. Cameron (May 26)

Salty Cove, Maine's prodigal daughter has returned. Iris is back in town, after swearing she'd never return, and she's not the only one. Her smoldering neighbor, Jude, is also sleeping under her parents' roof again. Iris doesn't plan on sticking around in Salty Cove for long, but as she and Jude fall into a summer romance for the ages, she begins to wonder whether a change of plans is in order.

Recipe for Persuasion by Sonali Dev (May 26)

Pride, Prejudice, and Other Flavors author Sonali Dev returns to the rom-com game with Recipe for Persuasion, a story about second chances at love. Ashna's restaurant is in dangerous financial waters, and the chef's relationship with her family is a mess. Joining a cooking reality show gives her a shot at some celebrity, but her partner on Cooking with the Stars was once her partner in real life. Now forced to work side-by-side with the man who ghosted her years earlier, Ashna tries to keep her chin up, but the cameras are aching to get more of her feelings on tape.

The Jane Austen Society by Natalie Jenner (May 26)

In postwar England, a tiny group of people in Jane Austen's hometown unite to save her legacy, more than a century after her death. They all have their reasons for saving Chawton's last links to Austen, but what they find, as they create the titular organization, is the power that good work has to heal the broken and downtrodden.

Sunshield by Emily B. Martin (May 26)

Written by real-life Park Ranger Emily B. Martin, Sunshield examines a post-climate-disaster world in which green spaces have become the purview of the rich, while the poor are left to eke out meager existences in the unforgiving desert wasteland. The posh residents of Moquoia's lush confines thrive because of the labor provided by slaves kidnapped from the Alcoro canyons. Three people — an aggressive liberator, an ambassador working within the system, and a captive who lies at the heart of the problem — must work together if they hope to make Moquoia and Alcoro better for all.

Something to Talk About by Meryl Wilsner (May 26)

When tabloids spin Emma and Jo's professional relationship into rumors of romantic entanglement, the two women find their careers threatened by the media frenzy. Work requires them to spend even more time together than usual, and now they have the paparazzi in tow. But as Emma and Jo bond over the weirdness of their situation, they start to wonder if they should risk proving the rumors right.