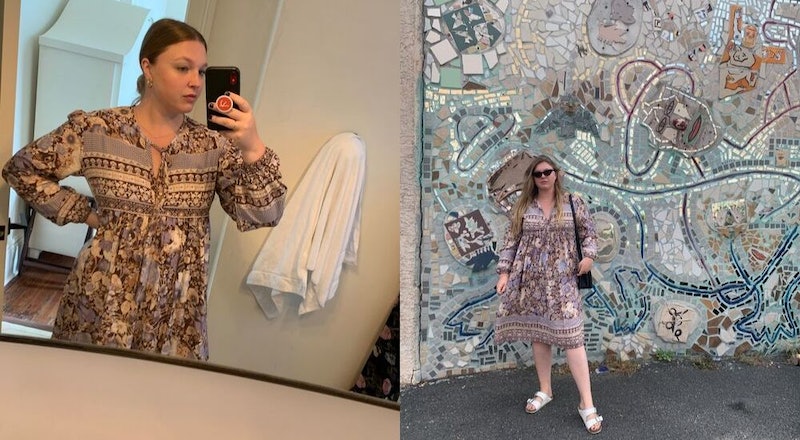 Like most people, I find it difficult to resist an affordable, will-be-at-your-door-in-two-days Amazon purchase. I also find it hard to resist everyday clothing that looks and feels like pajamas. When I kept seeing this $26 Amazon "nightgown" dress go viral on Instagram and beyond, I was curious to try it myself. With a size range that went up to 2XL and a silhouette that would seemingly accommodate people with bigger bodies, I wanted to know if the dress would work for me, too, as someone who usually wears a 16 in dresses.

The dress itself initially gained traction thanks to bloggers Hitha Palepu and Grace Atwood. They wore it, and then their followers wore it, and then those followers' followers wore it... you get the idea. The dress, which comes in 17 different patterns and colors, quickly had its own hashtag (#AmazonNightgown) and dedicated set of fans on Instagram. There were dozens and dozens of people wearing this dress on my feed, and basically everyone looked great. But none of them were plus size, meaning I had no idea if the dress ran big, small, or would shrink to the size of doll's clothing once I washed it. In the name of research, I decided to try it out myself. I ordered the biggest size available (2XL, or the equivalent of a 16-18 according to the size chart) in one of the colors that seemed like it would be able to transition from summer to fall, and hit the order button. Within days, the #AmazonNightgown itself was hanging in my closet.

My first impressions of the dress itself were actually pretty positive — it didn't feel aggressively cheap, or like the fabric would make me feel itchy. It was soft and super lightweight and, best of all, it fit! It wasn't quite as roomy as I was hoping and there were a couple issues with the construction of the dress in terms of where certain seams hit, but it fit all the same. And yes, it is cute.

There is a reason this is nicknamed after sleepwear. It is really comfortable and really soft. I can see it being just warm enough for fall (maybe over tights paired with knee-high boots), but was still cool and breezy enough for wearing during an 80 degree day. While I would have preferred it to be a bit roomier, it did fit without feeling too tight in any particular area. The best (and most surprising) part, though? It didn't shrink after washing and drying it at home. For a $26 dress, this was a major win in my book, especially because if it had shrunk I think it would have been slightly too small in the chest area.

If you are a size 16/18, the 2X will probably fit you. It won't, however, be as roomy and flowy as a lot of people make it look on Instagram. I have a relatively average sized chest (a 40C) and the top part of the dress was about as snug as I would want it. If you have a larger chest (even if you're smaller than a 16), this dress could be a problem for you. Another thing that was a little odd about the dress was where the shoulder seam hit. For me, at least, it seemed like the shoulder-length seam of the dress seemed about two inches too long on either side. The empire waist is also a little weird to get used to if you tend to buy clothing that hits your natural waist, rather than right under the bust. Other than that, though, I thought the construction was solid for a $26 Amazon dress.

At $26, I think the #AmazonNightgown is worth it for a trendy piece to lounge around the house in or just wear on days where you don't feel like wearing real clothes (but still have to wear something presentable). However, I'm also aware that these parameters leave out the vast majority of plus size shoppers, which is unfortunate. Most 2X items on the market will fit up to size 18, 20, and even 22, so the fact that this could be tight on a size 16 and 18 (depending on chest size) is a bit disappointing — especially given the fact that Amazon has so many clothing ranges that go up to 8X and beyond. But if you don't have a particularly large chest and are between 14-18 in most plus size pieces, this dress will work for you.