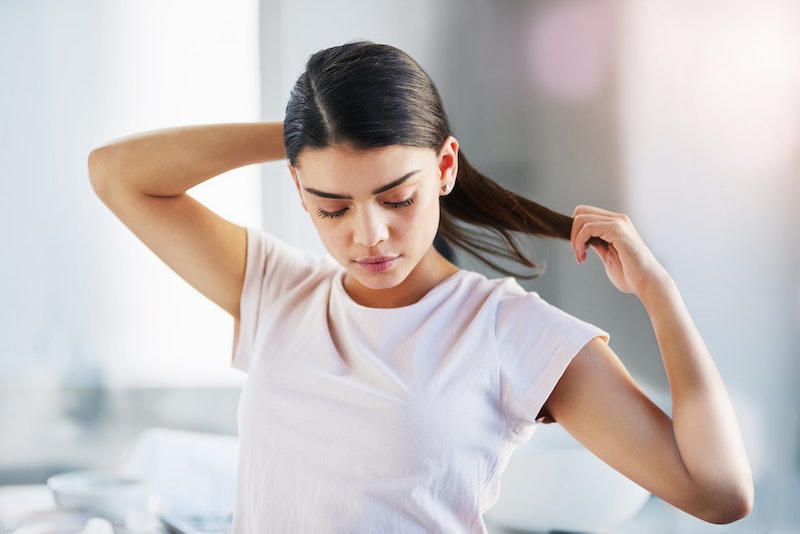 As Benjamin Franklin once said, nothing is certain in this world other than death, taxes, and that hair tie on your wrist (kidding, of course). But as much as we can’t live without them, hair ties can also be harbingers of destruction. (Also kind of like death and taxes.) Using the wrong kind of hair tie can leave your hair dented, snagged, and broken — and too-tight holds with elastic hair ties are really bad for your hair, which can cause headaches, balding, and receding hairlines — all of which the best hair ties to prevent breakage will definitely not do.

Elastic hair ties that won't cause damage are always coated, since exposing hair to pure elastic is a hard no. And as a general rule, the smoother the coating, the less it’ll snag, so silk hair ties or scrunchies are ideal for people with damaged, thin, or fragile hair. If you’re after a strong but safe hold, go for a band with a grippable coating. But nix the metal clasp, which can catch, and eventually pull out, stray strands.

People with curly hair might opt for a bungee or snap-closure band that won’t dent tight curl patterns. In fact, people with all hair types might want to steer clear of traditional elastic bands entirely, and instead go for telephone-cord spiral ties that leave no dents or damage to speak of.

Here, I'll run you through three of the best hair ties to prevent breakage, depending on your hair type. Now you can stop worrying about damaging your hair, and maybe start worrying about getting your taxes in order.