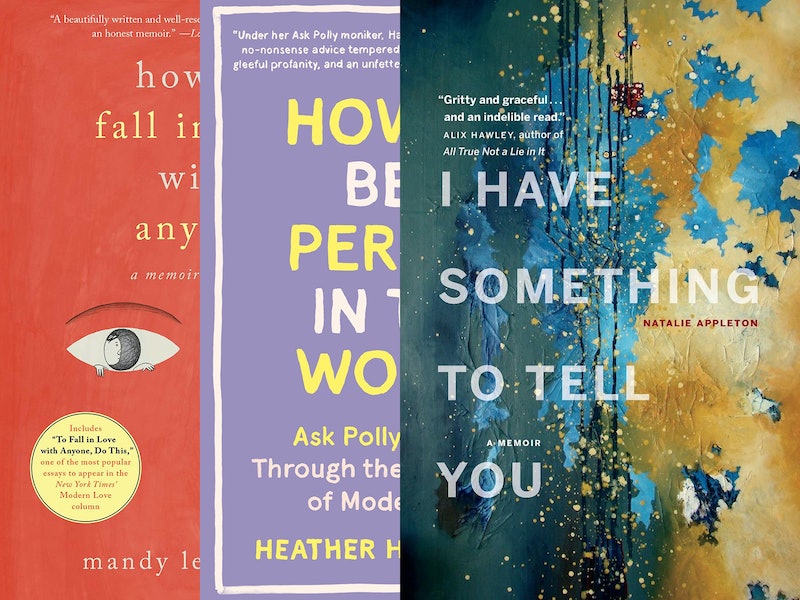 “I have to go." This line in Natalie Appleton’s memoir I Have Something to Tell You mimicked my own thoughts as I lay awake every night in the same bed — but a safe distance from — the person who caused my distress.

"My insides are sore and knotted with knowing this, with trying to tell me for so long," Appleton wrote. "That’s what I have to do. I have to go, soon."

I hadn’t quite been able to explain my feelings — to myself, to my friends. Or rather, I hadn’t been able to admit my feelings because I was embarrassed that I had ended up in this situation. But when I read that line — first in Appleton's New York Times "Modern Love" essay, then in the actual memoir — I started to realize that I was in an emotionally abusive relationship, and I had to leave.

I hadn’t quite been able to explain my feelings — to myself, to my friends. Or rather, I hadn’t been able to admit my feelings because I was embarrassed that I had ended up in this situation.

In her memoir, Appleton writes about a relationship that is not emotionally abusive, but rather is just the wrong fit for her. She had been looking for an excuse to leave, then realized she didn’t need one. I realized I had also been looking for an excuse — or rather, permission — to leave. Since Appleton found the courage to leave a house, an engagement, and a long-term partner simply because she didn’t want any of it anymore, I felt I should be able to leave someone who made me feel small and unloved.

I didn’t think that it could be so simple — leaving, I mean, but I had to read several more books before I made the decision for good.

'I Have Something To Tell You' by Natalie Appleton

While browsing the self-help section of a bookstore, looking for answers, I found Should I Stay or Should I Go? by Lundy Bancroft and JAC Patrissi. I bought another book, too, because I was embarrassed to be seen buying a book about relationships. (Turns out, feeling ashamed is one of the things that happens when you're in an emotionally abusive relationship.)

I had always considered myself an independent, confident woman, and now I had found myself in a situation where my boyfriend didn’t value my independence, undermined my confidence, and made me feel like I couldn’t do anything right. I couldn’t bring myself to tell my friends about my situation, because I didn’t know what I would say when they asked why I stayed. My friends couldn’t give me advice, because for a long time they didn’t know I needed it.

I’m not embarrassed now. Should I Stay or Should I Go? gave me the confidence I needed to leave. It had a response for every doubt I had, and focused not just on unhappy relationships but specifically emotionally abusive ones. This book was the first resource that gave me the language and understanding of what was really happening.

'Should I Stay Or Should I Go?: A Guide To Knowing If Your Relationship Can — And Should — Be Saved' by Lundy Bancroft & JAC Patrissi

All of the questions I had been asking myself every time something felt wrong — don’t all relationships have problems? Am I doing something wrong? Was I too sensitive? Is he just joking? — were answered in Bancroft and Patrissi's book. Reading it felt like a very inexpensive, yet very effective therapy session: The books was neutral third party that helped me work through my feelings, reassured me that they were valid, and helped me realized that what I was experiencing was not healthy. “You must be treated with respect," Bancroft and Patrissi write. "No partner should call you names make fun of you, roll his eyes at you in an argument, humiliate you, or mock you. Period. It doesn’t matter if he’s had a bad day or a bad decade, if he’s drunk, if he’s under financial stress, if he’s furious at you, or if he feels that you were disrespecting him. There’s simply no excuse for disrespect. There’s always another option.” The sentiment behind these lines might seem obvious to some people, but to me it wasn't obvious until I read it in this book.

"Reading it felt like (very inexpensive, yet very effective) therapy session: The books was neutral third party that helped me work through my feelings..."

Because I often read good relationship advice in Heather Havrilesky’s "Ask Polly" advice column, I bought her debut book How to Be a Person in This World hoping for more. I realized I wanted to reflect on my relationship the same way she reflected on her past: “When I look back now, I see someone who felt plenty of things but never really trusted her own feelings to guide her," she wrote. "I would daydream about meeting a better boyfriend, but I wouldn’t dump my not-all-that-great one."

I hadn’t been trusting my own feelings, but I wanted a better life for future Breanna. I wanted future me to say “I took too long to leave that relationship because I didn’t trust myself, but I know better now. I am better now.”

En route, perhaps appropriately, to a friend’s destination wedding, I read Mandy Len Catron’s How to Fall in Love with Anyone. I recognized the sentiment of Appleton’s “I have to go,” in Catron’s opening line: “In early 2010, I signed a declaration of marriage to a man I was thinking of leaving.” The narrative throughout Catron’s memoir revolves around this relationship, from the meet-cute to the aftermath.

Reading Catron’s account of how lonely she was after breaking up with a man who, like Appleton’s partner, was not right for her, resonated with me, because I was feeling that same loneliness — but I was feeling it while still in my relationship.

“We don’t seem to mind a little mystery in the process of falling in love,” Catron writes. “In fact, I suspect we prefer it. But endings are different. When love ends, we demand an explanation, a why.”

Here I was posed to be the dumper, not the tearful dumpee demanding to know why her partner was leaving her. Yet, I still wanted an explanation for myself. The discovery that I was in an emotionally abusive relationship was that explanation; I wasn’t being unreasonable, I wasn’t misunderstanding the situation.

"We don’t seem to mind a little mystery in the process of falling in love,” Catron writes. “In fact, I suspect we prefer it. But endings are different."

I felt an instant sense of relief the moment I delivered the news — I was leaving him, there was nothing that could change my mind — and walked away, forever.

Almost a year after I left my relationship, I was browsing a bookshop when I saw a bright yellow cover with the word I had come to know so well — Gaslighting. If this book—which was published in Oct. 2018—had been around when I was struggling to decide to leave, I would have bought it in a second. "It’s not you, it’s me," is a line we use to ease the pain of breakups, but I needed the variation that author Dr. Stephanie Sarkis wrote: "Is it me, or is it you making me think it’s me?"

These five books made me face my own unhealthy relationship, and gave me the strength to desire and find a better one — maybe they will for one of you, too.