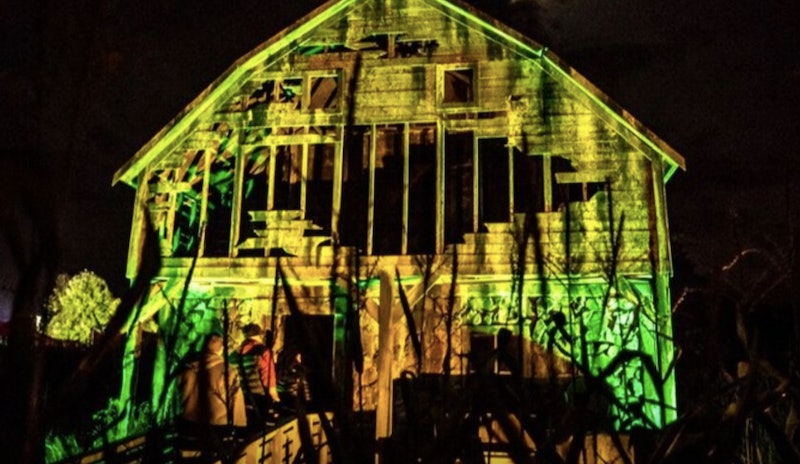 There’s a lot to love about the Halloween season, but if you’re a particular kind of person — a person like me, for example — then there’s one very specific Halloween activity that stands head and shoulders above the rest for you: Scaring yourself silly at high-octane haunted attractions. And if you’re looking for the scariest haunted houses in the United States, good news: Haunt industry veteran Amber Arnett-Bequeaith, who styles herself the Queen of Haunts, has recently released her list of the top 13 haunts throughout the country.

The haunt industry wasn’t always as huge as it is today. Attractions meant to both frighten and delight stretch back to antiquity; but as Popular Mechanics noted in 2016, the modern haunt has its origins in the 1930s, when DIY haunts built in suburban homes were meant to provide an alternative to the kinds of hellraising kids often got up to on Halloween. (Pro tip: Please don’t egg anyone’s house this year. Or any year.) In the 1960s and ‘70s, the youth organization known as the Jaycees — short for the United States Junior Chamber — started first using haunted houses to fund-raise before creating an actual company that provided a degree of regulation in haunts.

As these haunts grew more and more successful, an entire industry sprang up around it — and now, big budget haunts pop up all over the country each Halloween season, from those hosted at theme parks to those built on family farms. And as they got more elaborate, the haunts also got scarier. And scarier, and scarier, and scarier.

So, if you’re looking for the best of the best, here’s where to go, according to the Queen of Haunts:

Kansas City institution Edge Of Hell actually occupies several spots on the list: The namesake attraction, the actual Edge Of Hell haunted house, took the number one slot; the house known as the Beast took the number three slot; and the Macabre Cinema haunt took the number seven spot. You’ll note, though, under the drop-down “Attractions” menu on each haunt’s site that they’re all part of the same overall shebang, so forgive me for covering them all here.

The Edge Of Hell is the oldest of the bunch; its very first was all the way back in 1975, long before the haunt industry had become what it is today. With a focus on phobias, its current incarnation occupies five stories and includes everything from rat people to vampires and from hell hounds to the world’s longest living snake. (Yes, really. Its name is Medusa.) The Beast, meanwhile, sees you passing through a “medieval time warp,” where you’ll traverse four floors as you attempt to elude the Beast itself — and where your only escape options at the end of the ordeal are jumping out a two-story window or sliding four stories down. And lastly, Macabre Cinema takes you through a four-story, vintage movie theater where you won’t just watch classic horror movies of the past and present — you’ll live them.

Now, it’s worth noting that Amber Arnett-Bequeaith is actually co-owner of Full Moon Productions, which produces all of these haunts, as this interview with Arnett-Bequeaith published by the Kansas City Star in 2014 reveals. Is it a little disingenuous to include your own haunts on a list of the scariest haunts in the country? A bit, yeah. But for what it’s worth, these haunts do all have quite the reputation; I mean, I’ve never even been to Kansas City and I’ve known about them for years. Self-promotion aside, they are all notable haunts, so if you’re in the area and you like to scare yourself for fun, they’re worth checking out.

When it comes to a good haunt, location really, really matters — and Cutting Edge nails it: The haunt is located in a century-old abandoned meat packing plant in an area of Fort Worth long known as “Hell’s Half Acre.” But in the mythology of Cutting Edge, the meat packing plant isn’t processing beef anymore; it’s processing… something you’d probably rather not eat. It’ll take you close to an hour to make it through — if, that is, you don’t chicken out midway.

And, I mean, hey, if you do need to chicken out, that’s fine; do whatcha gotta do. Just know that you’ll be missing out on one of the most notable haunts around if you do.

Originally begun in 1991 as a way for Arasapha Farm in Glen Mills, Pa. to bring in a little extra money during the Halloween season, the Bates Motel and Haunted Hayride has grown into a full-on “scream park” in the intervening decades: In addition to the original hayride, there’s also now a haunted house and a haunted trail. The Bates Motel moniker, by the way, comes from the event’s founder; Randy Bates just so happens to share a name with another infamous, if fictional, Bates.

I went on the hayride a number of years ago, and although it definitely wasn’t the most frightening thing I’ve ever experienced, I also recognize that I have a higher tolerance for haunts than a lot of folks do. Whether or not the whole thing actually scares you, though, the production values are high and there’s lots of fun to be had.

Previously based in Norcross, Ga., NETHERWORLD — which has consistently ranked as one of the country’s scariest haunted attractions over the course of its 20-plus year run — moved to Stone Mountain in 2016. It’s still conveniently located for those based in and around the Atlanta area, though, so if you’re looking to get the pants scared off you this Halloween, this is the place to go.

NETHERWORLD’s 2019 edition features two haunts: Night of the Gorgon and Cold Blooded. Night of the Gorgon combines some of Greek mythology’s most terrifying monsters with a cursed mirror and an apocalyptic cult; if you dug the Cult season of American Horror Story, it’ll probably be right up your alley. Meanwhile, Cold Blooded involves killer reptiles and science running amok.

New York’s Hudson Valley has a certain… reputation. Sure, it’s beautiful and full of history — but it’s also more than a little bit spooky. And although Ulster Park isn’t Sleepy Hollow, it appears the Headless Horseman still finds it to be quite a welcoming place indeed. In fact, he’s set up a whole little fear-tropolis there.

Set on a 250-year-old farm, the Headless Horseman Hayrides and Haunted Houses offers a whopping 10 attractions: A mile-long hayride, a corn maze, and eight haunts. This year, some of the haunts’ themes include Two Raven Manor, the Lunar Motel, and the Deal With The Devil. A side show, actors and performers, four eateries, four gift shops, and separately-ticketed escape rooms are also on the premises, so, uh… if you make a trip to Headless Horseman, plan to stay there for a while.

I’ll confess that, while I’d heard of many of the haunts on this list before (I, uh, may or may not have gone through a period in the mid-2000s when those Scariest Haunted Attractions specials that aired on the Travel Channel pretty every day during the month of October were some of my favorite things to watch ever), Spookywoods was new to me. I’m surprised it took me this long to learn about it, though — it sounds spectacular.

Located on a plot of 60 acres in North Carolina’s Kersey Valley, Spookywoods has it all — haunted houses, haunted trails, “monster laser tag,” you name it. Tickets include access to all the regular ticketed events, although you can also add on some other bells and whistles, like ax throwing or an escape room.

But although these six haunts are considered some of the best in the country, there are plenty more still to be explored. Check out Queen Of Haunt’s full list here — and to find even more, including haunts that might be near you if the rest of Queen of Haunt’s picks aren’t, check out a haunt database like The Scare Factor, HauntedHouse.com, or Haunt World. These databases list haunts by state, so no matter where you are, you’ll be sure to find something to spook you out.

More like this
The 15 Best Passport Holders
By Megan Gray
Kimberly J. Brown & Daniel Kountz Looked Back On Their ‘Halloweentown’ Romance
By Stephanie Topacio Long
20 Genius Kitchen Storage Solutions For Decluttering Your Space
By Emma Garza
This TikTok Hard Seltzer Hack Involves A Milk Frother
By Alexis Morillo
Get Even More From Bustle — Sign Up For The Newsletter