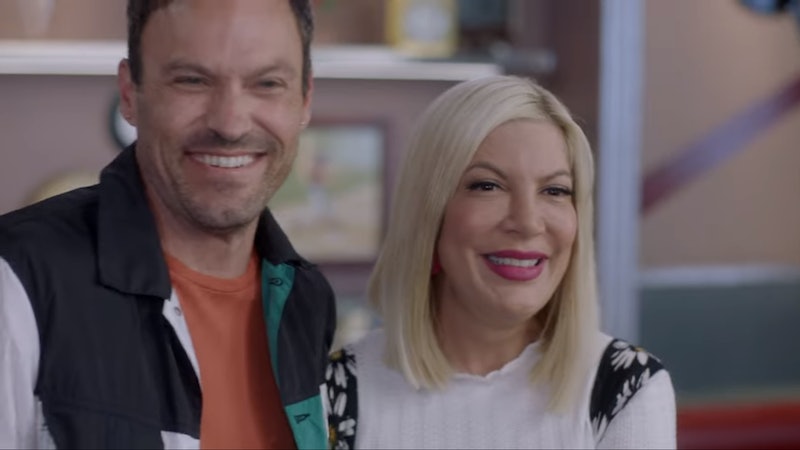 The gang's all back and they're hanging out in a familiar locale in Fox's new Beverly Hills, 90210 teaser. Yes, the famed Peach Pit is back, and still serving up drama, it seems. The latest peek at the upcoming reboot includes plenty of old favorites, including Shannen Doherty's Brenda Walsh, who makes a fitting entrance as she pops on her dark sunglasses near the end.

BH90210 premieres Aug. 7 at 9 p.m. on Fox, but don't expect your favorite characters to pick up where they left off when the show originally ended in 2000. You see, this reboot isn't a reboot in the traditional sense of the word. Instead, it's the fictional account of the actors' attempts to get a reboot off the ground in Hollywood. It all sounds deliciously meta, but the most important part is that Doherty, Jason Priestley, Jennie Garth, Tori Spelling, Ian Ziering, Brian Austin Green, and Gabrielle Carter are all reuniting to make the not-quite-a-revival happen.

And they definitely all look excited to return to their favorite high school hangout in the new promo. From reminiscing about making out to '90s songs to literally saying "I love it when we're all together," it's just like old times in the Peach Pit.

It's been 19 years since the original series ended, but that doesn't mean all of the old tensions, loves, and friendships among these fictional heightened versions of the actors won't create lots of delicious conflicts worthy of Beverly Hills, 90210. In February, Spelling explained the show's high concept to E! News. "It's not technically a reboot, because I feel like everyone has seen the reboot," she said. "We don't want to be the last ones like doing the reboot thing, and no one wants to see like old versions of ourselves, but they do want to see us playing our characters, so what we're doing is the entire cast is playing heightened versions of themselves."

Spelling is right when it comes to traditional reboots — there are more than enough of those on TV as it is. BH90210 looks like something different, and there's a wryness to the nostalgia in the teaser that sets it apart from the average reboot. Green and Spelling's dancing in the opening shot alone is more than enough to sell this anti-reboot/mockumentary experiment.

The six-episode series feels like a big swing for Fox, but it's one that could pay off if nostalgic fans show up to see what their favorite teen actors are up to now. For her part, Spelling sounds excited about the project. "Think Curb Your Enthusiasm episodes, in an hour long show, and we're all playing heightened versions, so it could be fictional, it could be non-fictional, people will have to guess," she told E!. "And then we will have pop-ins, because we're behind the scenes trying to do the reboot."

Hey, it may not be the reboot fans were expecting, but as long as the gang gets to reminiscence on the set of the Peach Pit, you know it's going to be a fun time.