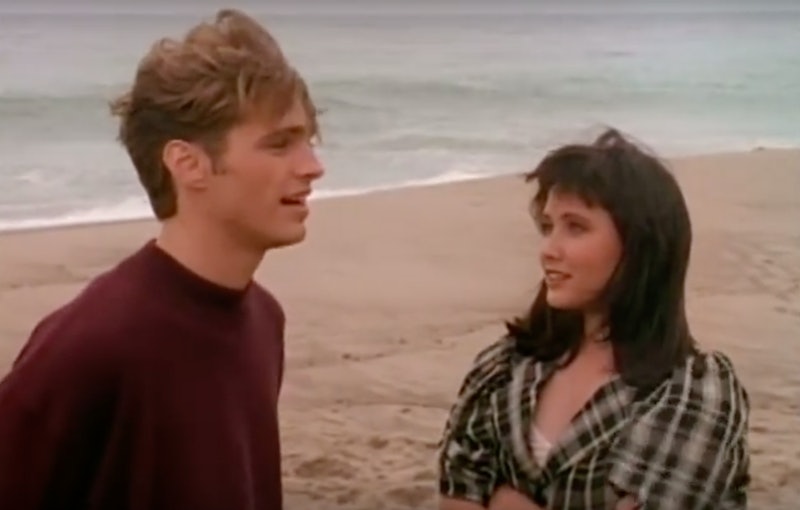 The Minnesota Twins are headed back to the small screen. (We are talking about the Beverly Hills, 90210 twins, not the professional baseball team that's based in Minneapolis. Just want to tackle any confusion before we continue.) Brenda and Brandon have reunited, and Shannen Doherty and Jason Priestley's BH90210 photo is very peachy and it is not the pits. On Wednesday, June 26, Doherty shared a picture she took with her costar while on the set of the Beverly Hills, 90210 reboot that will premiere in less than two months. “And just like that, the twins are back,” she wrote.

Doherty and Priestley played Brenda and Brandon Walsh, a set of twins who move to Beverly Hills from Minnesota and try their darndest to adjust, on the hit '90s drama. Priestley's Brandon was a main character for almost the entire series, and Doherty's Brenda was no longer on the show after Season 4. The fourth season's finale aired in 1994 (!), which means a quarter of a century (!!) has passed since Brenda and Brandon Walsh were on Beverly Hills, 90210 at the same time.

“It’s not technically a reboot, because I feel like everyone has seen the reboot. We don't want to be the last ones like doing the reboot thing, and no one wants to see like old versions of ourselves, but they do want to see us playing our characters, so what we're doing is the entire cast is playing heightened versions of themselves.”

"Think Curb Your Enthusiasm episodes, in an hour long show, and we're all playing heightened versions, so it could be fictional, it could be non-fictional, people will have to guess. And then we will have pop-ins, because we're behind the scenes trying to do the reboot."

Aaaaand now I'm imagining the original 90210 opening credits set to the Curb theme and yes, I am having a great time.

On Feb. 27, Fox officially announced that the cast of Beverly Hills, 90210 would be reuniting for a six-episode event. Series stars Priestley, Jennie Garth, Ian Ziering, Gabrielle Carteris, Brian Austin Green, and Tori were all on board for the meta dramedy. Deadline reported on April 26 that Doherty had joined the reboot of the primetime soap. That same day, Doherty shared a throwback photo of the Beverly Hills, 90210 cast and wrote, “Yes it’s official. The real question is.... will we still be rocking those outfits. #bh90210”

The late Luke Perry was unable to join the reboot cast due to his Riverdale shooting schedule, but he was still involved in the series before he died. “We talked to him on the phone because we still wanted his input," Green told People in May. "He was just that kind of guy. Knowing that that’s not a possibility is really hard.”

More like this
The 'Hocus Pocus' Sequel Finally Has A Release Date & It Makes Total Sense
By Shannon Barbour and Radhika Menon
Everything To Know About 'Scream 6'
By Jack Irvin and Jake Viswanath
Emma Thompson, Lashana Lynch, & Stephen Graham Lead Netflix’s 'Matilda'
By Sophie McEvoy
Alicia Silverstone Has Recreated An Iconic 'Clueless' Scene
By Frances Stewart
Get Even More From Bustle — Sign Up For The Newsletter