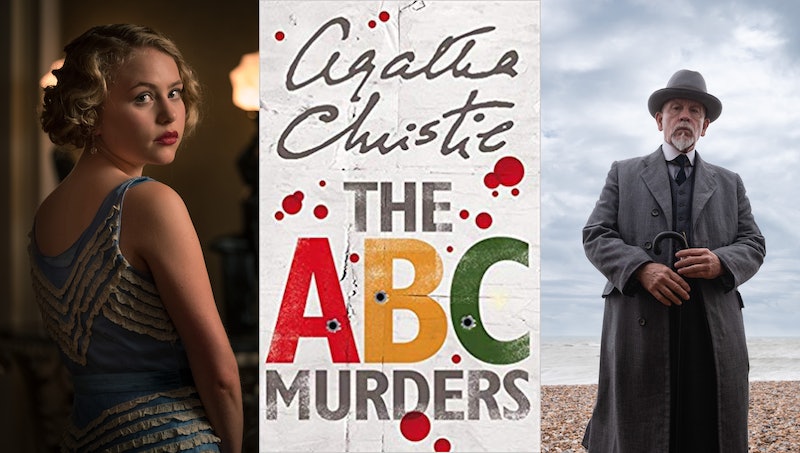 Over the Christmas period the TV adaptation of Agatha Christie's The ABC Murders is scheduled to air on BBC One. The three part mini-series will follow lead characters, such as Hercule Poirot, as they investigate a series of mysterious murders carried out by a killer who is simply referred to as "ABC." The BBC adaptation will star the likes of John Malkovich and Rupert Grint. And viewers are in for an absolute treat, if The ABC Murders book ending is anything to go by. Some major spoilers lay ahead — you have been warned.

Well, like all good murder mysteries, the original 1936 novel concludes with the unmasking of the ABC serial killer. And it is revealed that the character Franklin Clarke, one of the murder victim's younger brother, is actually the man behind the killings. Clarke's motive is revealed to have stemmed from his desire to inherit the wealth of family members, something he feared he would risk losing, unless certain people were out of the picture. Poirot manages to connect the dots and eventually confronts Clarke with an accusation, which in turn forces a guilty Clarke to carry out a failed suicide attempt before he is arrested on suspicion of murder.

The thrilling television adaptation of this classic mystery will begin on Boxing Day at 9 p.m. on BBC One. The remaining episodes will then air at the same time for the following two days, on Thursday Dec. 27 and Friday Dec. 28, respectively.

The new series will also be made available to view on Amazon Prime shortly after its initial broadcast on BBC One, reports the Express. The cast of the adaptation includes John Malkovich as the show's lead, Hercule Poirot. Also starring in The ABC Murders is actor Rupert Grint as Inspector Crome, who is best known for his portrayal of Ron Weasley in the Harry Potter franchise. Broadchurch star Andrew Buchan will play the character of Franklin Clarke, whilst Twin Peaks actor, Eamon Farren, takes on the role of Cust. Completing the lineup of the BBC murder mystery is Tara Fitzgerald as Lady Hermione Clarke, Shirley Henderson as Rose Marbury, Jack Farthing as Donald Fraser, Bronwyn James as Megan and Freya Mavor as Thora Grey.

As reported by the Radio Times, the new drama was penned by Sarah Phelps, who has previously written other BBC Agatha Christie adaptations including The Witness For the Prosecution, And Then There Were None, and Ordeal by Innocence. When discussing the new series, Phelps said: "Set in the seething, suspicious early 1930s, The ABC Murders is a brutal story of violence and lies, the long shadow of the past and the slaughter to come. At its centre, one of the most familiar, famous characters in crime fiction. We may all think we know Poirot but do we really know Hercule?"

This classic murder mystery sounds like a perfect addition to the 2018 Christmas television lineup, and I cannot wait to see Agatha Christie's characters come to life on-screen. Bring it on.