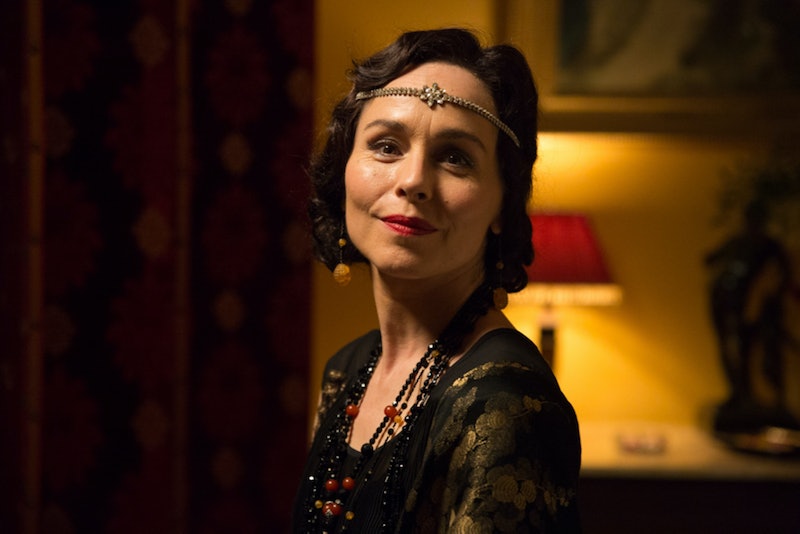 Hermione Granger is no longer the only famous Hermione on telly. Nope, Lady Hermione Clark in upcoming period drama come murder mystery, The ABC Murders, is about to take the floor. And I'll bet you recognise her face. No wonder as the actor who plays Lady Hermione Clark has been killing it in the acting game for quite some time.

Tara Fitzgerald is an incredibly accomplished actor of stage, television, and film. So I am almost positive you have seen her somewhere before. As the Guardian reports, she began making waves early on in her career, when she won a New York Drama Desk Award for playing Ophelia in 1995.

I'm sure regular watchers of the piece of magic that is British television will recognise her for her incredible role as Dr Eve Lockheart in Waking The Dead, and for starring roles in shows like Strike. And y'all like every great actor of the British Isles, she is on flipping Game Of Thrones. Yes, she is Selyse Baratheon, the wife of Stannis Baratheon. Just think of poor little Shireen. Ugh, shudders. That still remains one of the darkest plot twists in the show's history.

In The ABC Murders she is playing the role of Lady Hermione Clarke. She is married to Sir Carmichael Clarke, who is a lovely, mild mannered aristocrat who's main loves are his dog Wilbur and his family. My kind of guy. Anyhow, Lady Hermione is absolutely bonkers about Hercule Poirot and desperate to know all about him and his cases. She is prone to living in the past, when she was a famed beauty and lived a pretty lit life.

You have to wonder though, how does she fit into this story? So The ABC Murders is from the mind of the incredible national treasure that is Agatha Christie. The story is of a serial killer who has a pretty alphabetical modus operandi. And good on them I say, organisation is key. So the murders are in places that begin with ABC and the places they happen are like ABC and then there is a railway guide that is like ABC. Easy as 123, you and me. Oh, sorry got side tracked there.

It is adapted for screen by Sarah Phelps who has proven in the past, when she made Ordeal By Innocence, that she is absolutely not afraid to change the ending of a classic. This was much to the chagrin of some fans, but TBH I am totally here for taking a classic and giving it a good twist by the goolies.

The story is set in Poirot's later years, with John Malkovich playing the lonely figure. Europe is approaching a second world war and he is a solitary old man in a world which has changed very rapidly around him. The description from the BBC is actually chilling.

"As Poirot tracks the killer across a riven, tense England, the case peels back the layers of the persona he’s created to survive in a foreign land, surrounded by strangers where the only person who seems to truly understand him, is the deranged, uncontrolled killer."

Watch The ABC Murders on BBC One at 9 p.m. from Wednesday 26 December