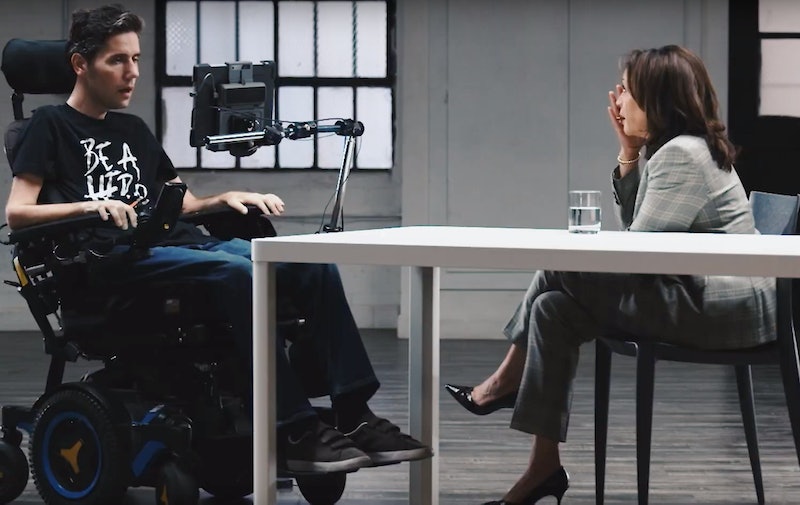 Access to health care is a life or death issue, especially for Ady Barkan, a lawyer and activist who was diagnosed with ALS, or Lou Gehrig's disease, in 2016. And as his health has deteriorated, his activism hasn't waned — it's grown. In late August, he and his super PAC started Barkan's Uncovered, a video series where he has one-on-one conversations with presidential candidates about health care. His questions are personal, and many of the candidates become emotional during their answers, but he says that's the point — to humanize the health care discussion.

"When we talk about health care in the national political conversation, it is too often an abstract discussion with facts and figures and dollar amounts," Barkan, tells Bustle in an email. He says those aspects of health care policy are important, because comprehensive health care reform would also affect the economy, but "they too often obscure the actual stakes. At the end of the day, this is a life and death issue — it is about people’s lives."

Barkan first went viral in December 2017 when he confronted Sen. Jeff Flake on an airplane about his vote on the Republican tax bill, which significantly cut programs like Medicare. Since then, Barkan has gradually lost his muscle function and his ability to speak due to the disease, and he and his wife, Rachel, have to pay $9,000 out of pocket every month for the care he needs.

Barkan says every American "has either had some unpleasant run-in with the health care system, or knows a friend or family member who has," so he wanted to start his conversations with the candidates by asking them about their own experiences with the health care system. He started off his interview with New Jersey Sen. Cory Booker by showing him a video he made for his son, Carl, who was born just four months after Barkan was diagnosed with ALS. Alongside images of Barkan and Carl, Barkan says, "Today, my muscles are turning into Jell-O, and my voice ain't what it used to be. All that matters to me is to make you proud of your old dad."

When the video ends, Booker says, "That's very beautiful," as he wipes away tears. Barkan lightens the mood for a moment by asking Booker whether he and his girlfriend, Rosario Dawson, "are going to have some brilliant and gorgeous babies, too." Booker laughs and says, "That would be a dream."

But then Barkan brings the conversation back to serious subjects. He asks Booker about caring for his father, who was diagnosed with Parkinson's Disease, and weaves that into a larger discussion about health care and family.

Barkan humanizes the conversation from the beginning in his interviews with Vermont Sen. Bernie Sanders and California Sen. Kamala Harris as well. His first question to Sanders is about his favorite parts of fatherhood, while his first question to Harris is about the day her mother was diagnosed with colon cancer. Harris, only a few moments into her answer, becomes emotional and her voice cracks. "That was one of the worst days of my life, truly," she says.

Barkan says he didn't expect such raw reactions from the candidates, but that he was glad they decided to open up, offering voters a chance to see "emotional honesty and vulnerability."

"In an age when so much of what we consume and experience is processed and manufactured, people are looking for something real and authentic," he says. "So much of the way our media conversation plays out isn’t designed to give people that, and so I and my colleagues at the Be a Hero Project wanted a platform to give candidates an opportunity to share something genuine and real."

"We need more and more people to understand the extent of the gaping inequities and injustices in our current health care system."

The conversations oscillate between emotional, human discussions of health care and illness, and more nuanced policy debate, where Barkan isn't afraid to press the candidates on their positions. At one point, he asks Booker, who received donations from pharmaceutical companies until 2016, "You would never take money from the NRA and the gun manufacturers, for example, and you're a national leader in the fight against gun violence. The pharmaceutical and insurance industries profit off of denying people necessary care, resulting in tens of thousands of preventable deaths year after year. Why do you think it's OK to take their money?"

With regards to what health care problem is most pressing right now, Barkan says, "I don’t know where to begin." He notes that 30 million people in the United States still don't have health insurance, and millions more who are under-insured "find themselves going bankrupt when insurance companies refuse to cover the cost of necessary care." The prescription drug pricing epidemic, the opioid epidemic, and underinvestment in finding cures for diseases like ALS or cancer are other pressing problems, Barkan says, and to him, there's one solution that's best.

"What we need is a systemic overhaul to replace this for-profit model with Medicare for All that guarantees health care to every American as a right and not a privilege," he says.

So far, Sanders and Massachusetts Sen. Elizabeth Warren are the only two candidates to publicly support Medicare for All, which is a single-payer, government-run health care system, according to Reuters. Booker, Harris, and other Democratic candidates including Andrew Yang and former Congressman Beto O'Rourke support a more moderate Medicare for All plan that also includes the option to get insurance through a public marketplace or through your employer, Reuters reported.

To Barkan, though, a middle-ground combination of a public option and Medicare for All just won't do it. "Only a truly ambitious, radical departure from the status quo that replaces the exploitative for-profit model with one that guarantees health care as a right for all will ensure that we no longer live in a nation where people can go bankrupt on account of their medical bills," he says. "And I think that’s the policy that’s most likely to pass into law, as Medicare for All has a real movement and base of support behind it, which isn’t as true for something like a public option."

He says he hopes the Uncovered series gives people a more personal look at the candidates, and reaches people who don't usually follow politics, "because we need more and more people to understand the extent of the gaping inequities and injustices in our current health care system."

Barkan says we're "at a crossroads" in the United States when it comes to health care, and that we can either be a society that "puts profits above all else" or one "where everyone can live with dignity and has the basic resources they need to thrive."

"I know which choice I want our society to make," he says, "and I know which world I want Carl to grow up in."