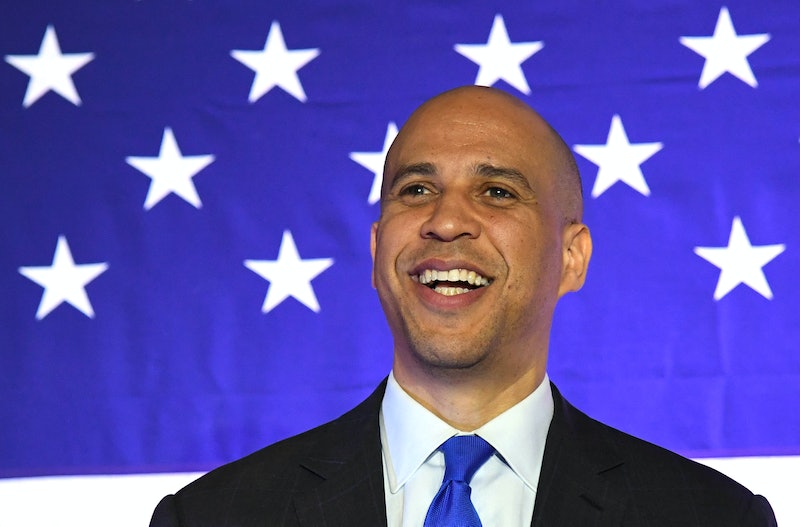 In an interview with Ellen DeGeneres Wednesday, Sen. Cory Booker gushed about Rosario Dawson, and suggested that if the two ever get married, he already has an officiant in mind. The Democratic presidential candidate's comments come days after Dawson confirmed for the first time that the two are dating.

"She's just an incredible human being," Booker told DeGeneres. "She is just a deeply soulful person who has taught me a lot of lessons about love already."

Booker admitted that it can be "difficult" to have a media spotlight on both him and his partner. But he had nothing but lavish praise for Dawson, who he said "makes [him] a better person."

"Sometimes, you show the greatest strength when you make yourself vulnerable, and you know, she really has this nurturing spirit that makes me more courageous," Booker said. "Not just in the love that I project and want to see in our country, but I think even our personal relationships — to love more fearlessly. So I'm very, very blessed to be with somebody who makes me a better person."

Rumors of a Booker-Dawson romance began making the rounds in January, when the two were spotted together at the movies and, in the same week, attending a Broadway show. Not long thereafter, Booker confirmed on a radio show that he's "got a boo," but he didn't say who the boo was. It wasn't until mid-March, when a TMZ reporter interviewed — or, in Booker's words, "ambushed" — Dawson at the airport in Washington D.C. that their relationship was officially, publicly confirmed.

"Yes, very much so," Dawson replied when asked if she and Booker were dating. "He's a wonderful human being. It's good to spend some time together when we can." The Sin City star called the New Jersey senator an "amazing human being" and said he'd be make for a good president as well.

Booker has the potential to be America's first unmarried president since Grover Cleveland, and only the country's second overall. Of course, that wouldn't be the case if he were to get married at some point between now and the 2021 inauguration — and in his interview Wednesday, DeGeneres brought up the possibility of Booker and Dawson tying the knot in the White House itself.

Booker countered with a surprising offer.

"Would you help preside over the wedding?" he asked the host.

"Is that a promise?" Booker asked, offering a handshake.

"Yes, yes," she replied, shaking his hand to raucous applause from the audience.

Dawson, during her interview with TMZ, was also asked about the possibility of marrying Booker.

"Wow, you're just going all in," Dawson replied, laughing. "I have no idea. I am just grateful to be with someone that I respect and love and admire so much, who is so brilliant, kind, and caring, and loving."