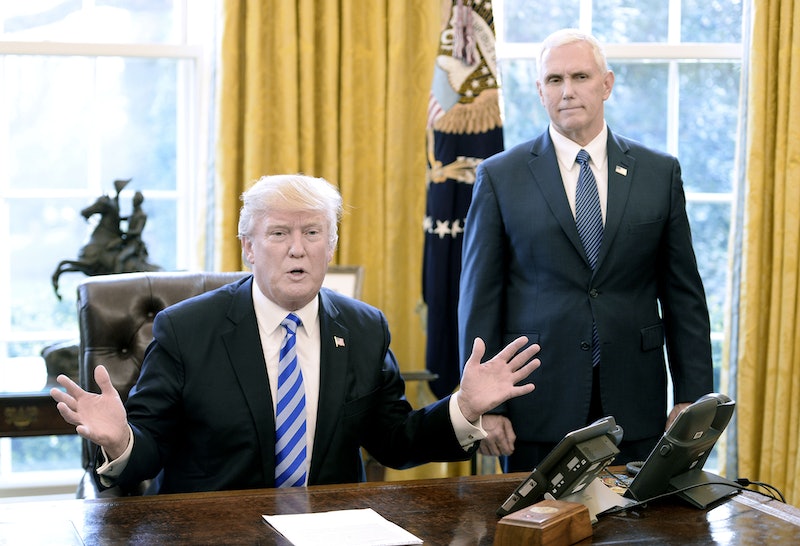 I didn’t really live in an America before the Affordable Care Act, so I guess that makes me lucky. I'm lucky because before Obama’s signature health care bill was put in place, with its list of 10 essential health benefits — including mental health services — 18 percent of people who bought their own insurance didn’t have mental health coverage. And I’m lucky because the ACA had protections for people with a pre-existing conditions, meaning I can’t be refused coverage or care, as I could have been in the past. I'm lucky because I've been diagnosed with bipolar disorder and depression, two of the many mental illnesses that insurers discriminated against before the ACA, but I never had to face that discrimination — but now, due to the passage of the American Health Care Act, they may discriminate against these illnesses once again.

The AHCA rolls back many of the ACA's changes, including allowing states to potentially re-introduce the idea of "pre-existing conditions," and allowing insurers to charge a penalty to patients who’ve had a 63-day lapse in coverage. This might not sound like a lot to you. But for many people — especially those dealing with a mental illness — it can add up to a burden that is nearly impossible to deal with.

I’m pouring most of my money into my mental health. But at least I have insurance to cover my medication.

My doctors and therapists don’t accept insurance, partly because of the historical problems (read: societal stigma) related to getting mental health care. So I have to pay out-of-pocket, keep my receipts and just hope my parents’ insurance will reimburse us, at least partly, for these expenses.

I am lucky in that my meds are covered by insurance. Without that, I would have to pay somewhere around $1,000 a month for them, or risk going without in order to save money. Which is not a great plan, because when I’m off my meds, one of two things happens: I become severely depressed and suicidal, which in the past has led to a hospital visit to literally save my life. Alternately, I sink into a state of numbness, in which I just don’t feel anything. I don’t create, I don’t contribute to society, I barely function.

So medication saves my life on a daily basis. Without it, I spiral. Even with it, I’m in a bad place. I see a doctor every month, a therapist every week, and I also now attend group therapy every week, because the meds and the therapy didn’t keep me from going through a bad episode last month. I’m pouring most of my money into my mental health.

But at least I have insurance to cover my medication. And at least I have the option of getting reimbursed, because while my care providers only let me pay out-of-pocket, I can submit receipts to my insurance provider and see if they’ll consider it an adequate medical cost.

I can’t imagine — or don’t want to imagine — a world where insurance isn’t forced to accept mental health coverage as an essential benefit.

But that's exactly what the AHCA does. It allows states to set up their own standards of benefits they’ll offer, which means they have the option of deciding that mental health isn’t an essential health benefit.

With stigma against mental illness very real, it’s possible that there are politicians who will see that mental health isn’t really something we need insurance for.

But it is. It very much is. I am sick to my stomach and terrified right now, not because I think my state will repeal my insurance (I live in the very Democratic New York City), but because there are people out there who aren’t so lucky to live in a place where the lawmakers are empathetic to their needs. Because there are politicians who put their own political interests above the interests of the people they were voted in to serve.

Mental illness is real, and it sucks. I can’t say that enough. It’s harrowing to live with your brain turned against you, to struggle to fight your own thoughts every day. Why can’t we see that yet? Making mental health care "optional" supports the idea that mental illnesses are not real illnesses, and denies the fact that our brains can be just as deadly as our bodies.

But knowing that your life and health are considered paltry and worthless by the people who vote and the people who are voted in, because you have a mental illness, sucks much more.

For my sake, the sake of every other person with a mental illness, and the sake of everyone with a pre-existing condition, of every grandparent who could be charged as much as five times what a young person is charged for insurance, of every individual who lives and breathes and is afraid, please have empathy.

We can stop this bill from becoming law. If we call our Senators and put the fear of not getting reelected into them — if make sure they know that passing this bill is political death — we can change the course of history. For the better.

And if you supported the AHCA, I’m imploring you to have empathy. Even if you disagree with Obamacare, you have to realize there’s a better solution than this. So let's step up and speak out. Because mental illness can be harrowing as when the cells in your body turn against you, as chronic as any lingering bronchitis, as life-threatening as cancer. And we need to recognize this.