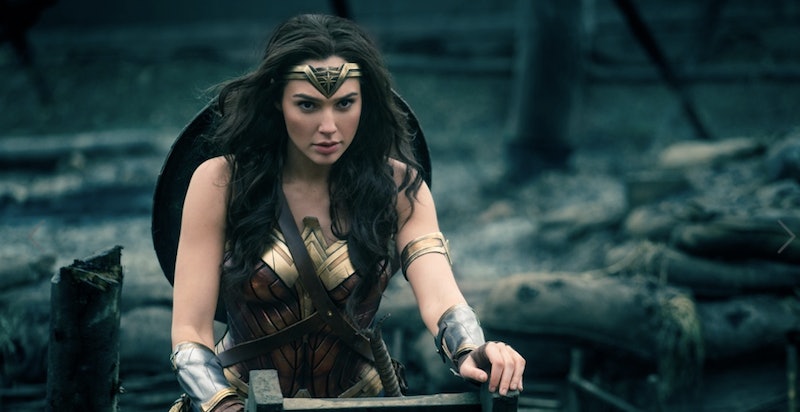 If you want to see Wonder Woman in a theater full of other women, the Alamo Drafthouse in Austin wants to give you that opportunity. With a little help from Beyoncé's "Formation," the theater chain announced that, in honor of the first standalone film about a female superhero, they would hold a special “Women (and People Who Identify As Women) Only” screening. Shortly after making the announcement via Facebook, the Alamo Drafthouse got push back from many of its male followers, who felt this was unfair. Instead of apologizing, though, representatives of the theater decided to start a very civilized conversation about why they decided to dedicate a showing specifically to the women who love Wonder Woman.

Yes, on Facebook, where polite, engaged conversations are like double rainbows — so rare and oh so beautiful — Alamo Drafthouse took the time to respond to anyone who didn't seem to understand that this screening on Tuesday, June 6 wasn't a condemnation of men, but a celebration for the women who have been waiting decades to see this movie. And they often did so with a bit of humor. When someone asked, "Have you ever hosted a men's only showing of any film?" The theater responded, "We've never done showings where you had to be a man to get in, but we *did* show the Entourage movie a few years ago."

In response to someone else's question of whether Alamo Drafthouse will be having "a male only screening for Thor: Ragnarok or a special screening for It that's only for those who identify as clowns?" The theater agreed the latter wasn't a bad idea: "We might actually have to steal that clown idea. Thanks."

But Alamo Drafthouse wasn't just bringing the snark; they also responded to many of the complaints with a surprising level of compassion and politeness. After one person wrote that they thought Alamo Drafthouse was a "sexist business" and would "never set foot" inside the theater again, representatives of the theater explained that they hated to lose his business, but asked him to humor them:

Give it a day or so and consider this notion (it's true, we promise): that the event is really just supposed to be a fun way for female fans of a comic book character that's important to them symbolically to see a movie they're excited about. There's no political agenda intended, honest. If you still think we're wrong then, well again — very sorry to lose your business, but hoping you and your family make it back sometime soon.

Alamo Drafthouse often has special screenings. They've done "veterans and active military screenings many, many times. We will absolutely continue in the future," as they wrote on Facebook. The reason this one received so much anger was because it pertained to women and inherently, in our culture, that becomes a political statement. It's more or less like how some men felt last summer's all-female Ghostbusters reboot was some sort of slight against them. (It definitely wasn't.)

Alamo Austin was just trying to do something fun for the release of this movie, and that was it. The commenters turned it into something more, and, let's be honest, in doing so they sort of answered the question of why a screening like this means so much to women. Movie theaters should be a safe space, but it doesn't always feel like they are. Alamo Drafthouse tried to rectify that with this screening and, when they received push back, they didn't back down. They instead had a little fun and maybe even got some people to reconsider their anger over the screening, which sold out in minutes. In fact, Alamo Austin announced on Facebook that they will be adding additional screenings.

Of course, not all commenters wanted to complain. Some just wanted to know how the theater planned to handle any disruption from those looking to cause trouble. "Our plan?" Alamo responded to one commenter. "We'll have the hardest working, baddest ass staff possible on deck." Well, be that as it may, I'm sure a theater full of female Wonder Woman fans would be happy to help should any trouble arise.