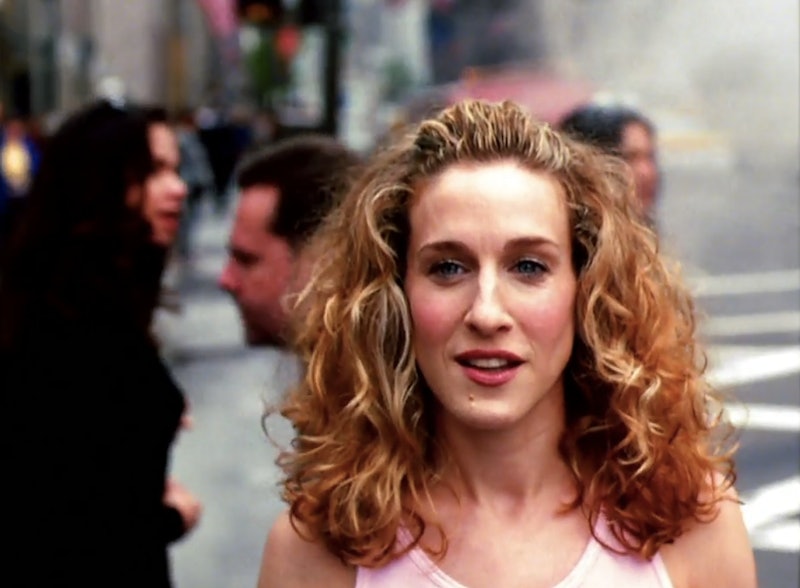 Sex and the City may have premiered back in 1998, but Carrie Bradshaw's tutu is just as iconic 20 years later. It may come as a surprise, then, that her signature blush tulle almost didn't make it into the show. In a new interview with Entertainment Weekly, creator Darren Star revealed that they tried out several looks before landing on the baby pink tutu, including, as Sex and City's alternate opening credits reveal, a very underwhelming blue, tea-length dress. They'd also toyed with the idea of Carrie tripping upon seeing her newspaper ad emblazoned on the side of a bus, instead of getting splashed with street water.

As Star explained to EW,

"There were two wardrobes. One was the tutu, and we did one pass where Sarah Jessica was wearing a blue dress and didn’t get splashed; instead, she trips when she sees the ad. In my mind, it was a nod to The Dick Van Dyke show, but we didn’t use it. It’s in the archives.”

Costume designer Patricia Field — who reportedly found the skirt in a $5 bin on a showroom floor — went on to explain that the SATC team wasn't on board at first, and she and star Sarah Jessica Parker had to fight hard to get it to screen. She said,

"It was very difficult for the producers to understand the tutu. Sarah Jessica and I were fighting for it, and Darren said, ‘Okay, but I want other outfits as possibilities' ... It was such a brilliant choice because, in a way, Carrie’s dancing through her life in New York."

Of course, they eventually won out. Good thing, too, because I think we can all agree that the opening credits wouldn't have been the same without it. As Sex and the City wore on, Carrie fast blossomed into a style icon, and that tutu set the tone for the parade of influential fashion that followed. Simply put, it encapsulated Carrie's always chic but consistently daring wardrobe, and cutting it could have quite literally changed the fabric of the show.

You can watch the alternative opening sequence over on Entertainment Weekly.

More like this
Vanessa Hudgens Proves She's Always A Wildcat At This 'High School Musical' Location
By Alyssa Lapid
Emma Thompson, Lashana Lynch, & Stephen Graham Lead Netflix’s 'Matilda'
By Sophie McEvoy
Why You Loved 'One Tree Hill' So Much — And Still Do
By Sabienna Bowman and Radhika Menon
Bella Hadid Just Wore Y2K-Inspired Pacifier Earrings
By Natalia Perez-Gonzalez
Get Even More From Bustle — Sign Up For The Newsletter