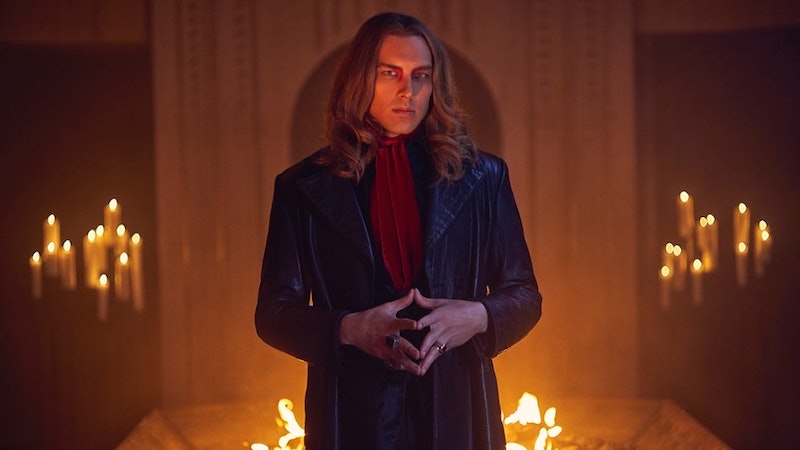 Ryan Murphy always likes to keep the themes of his American Horror Story seasons under the radar for as long as possible, but now the time has finally come to learn what the next season is about. Murphy took to Instagram on Wednesday, April 10, to post an American Horror Story Season 9 teaser video that also revealed the theme of the upcoming season, which is titled 1984. So yes, it's time to get ready to head back to the '80s.

The short teaser gives off some very big Friday the 13th vibes that'll leave you screaming in both terror and excitement. It begins with a terrified girl running through the woods, being hunted down by a masked killer (Jason, is that you?) who happens to be carrying a very large knife. She manages to find shelter in a cabin, but if horror movie tropes have taught us anything, it's that the moment you think you're safe is usually right when the killer will strike. And given the knife that cuts through the wooden door very close (you might even say uncomfortably close) to the unnamed girl's head, it's safe to say that American Horror Story: 1984 will prove to be no exception to that rule.

It appears that the promo itself though doesn't consist of any actors who will be starring in the season itself, however. Much like many other American Horror Story tearers before it, the clip is merely meant to give you a sense of the overall theme, rather than introduce you to actual characters.

At this point, the only cast members that we know of are Emma Roberts and Olympian Gus Kenworthy, who will play boyfriend and girlfriend during the season. Perhaps they'll be killer's first targets? Meanwhile, Evan Peters, who has been in every season of American Horror Story since its inception, recently revealed that he won't be returning for Season 9, so he sadly won't have a part to play when all these storylines begin to unfold.

Season 8, titled Apocalypse, consisted of some of the biggest crossovers in the show's history, bringing characters from both Murder House, Coven, and even Hotel back into our orbit. There's no word yet if 1984 will also see some familiar faces from season's past pop up from time to time, but given that all AHS seasons are connected, it's definitely not out of the realm of possibility.

And just in case you're wondering why Murphy chose the particular year of 1984 for the title, it was a time that saw the release of many popular horror films, such as A Nightmare on Elm Street, Children of the Corn and Friday the 13th: The Final Chapter. So you can probably expect to see some nods to all of these slasher films and then some when Season 9 debuts this fall on FX.

More and more details about the new season are sure to come to light as time goes on, but in the meantime let's all just savor the idea of emerging ourselves back into classic '80s horror. It's going to be a bloody good time.