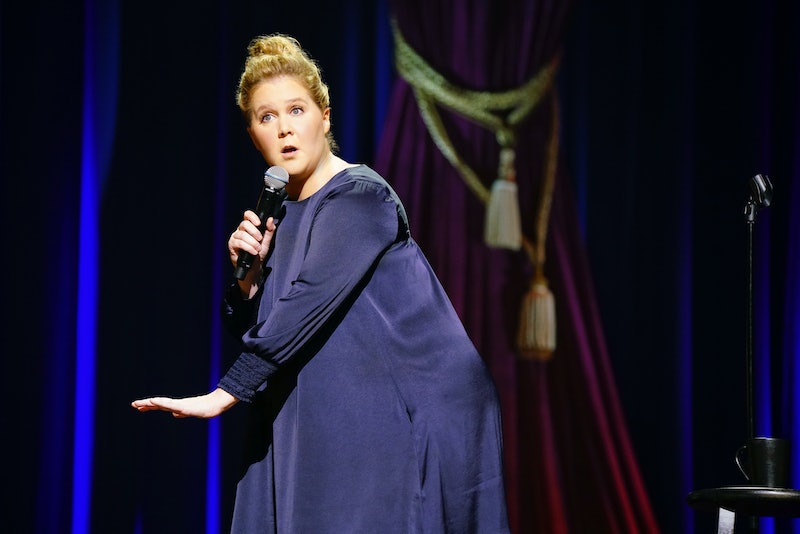 Get ready to see a whole new side of Schumer. That's the message that comes along with Netflix's release of the trailer for Amy Schumer's new comedy special Growing, which is slated to hit the streaming platform on March 19. The stand-up special will cover a wide range of topics, but the trailer itself makes sure to focus in on marriage and pregnancy — two things that have become a big part of the comedian's life over the past year. And based on the footage provided, Schumer has absolutely no intention of holding anything back, offering up some refreshing and truthful insights about what being pregnant has been like for her. But really, should we expect anything less from this comedy queen?

"Here's the thing, you're pregnant, but you don't change who you are," Schumer quips in the trailer. "I hate women who start to act like really precious. You don't stop being you, you know? You don't stop working or drinking." So if you've ever been pregnant, or currently are pregnant, or even thinking of becoming pregnant in the future, get ready for Schumer to dish out some hard truths that are downright hilarious but also completely relatable.

Schumer will also make a point of touching on the complications she's faced throughout her pregnancy, which ultimately forced her to cancel the rest of her comedy tour on Feb. 22. “If you had a good pregnancy, like if you’re someone who enjoyed being pregnant, I just hope your car flips over,” she jokes in the clip.

The official synopsis of Amy Schumer Growing reads is described as follows:

"Amy Schumer gives a refreshingly honest and hilarious take on marriage, pregnancy and personal growth in her new Netflix comedy special, Amy Schumer Growing. Filmed in front of a packed house in Chicago, the comedian talks about the joys of womanhood, settling into marital bliss, and yes also you guessed it, sex! The special will launch globally on Netflix on March 19."

Schumer initially announced her new Netflix special in an Instagram video, which she posted on Feb. 12, along with the caption: "Ahhhhhh I'm having a SPECIAL! March 19th"

From that alone, fans could probably assume her latest stand-up was going to be amazing, but now the trailer has now provided concrete proof of that fact. Marriage and pending motherhood may all be new aspects of her life, but that Schumer humor we've all come to know and love isn't going anywhere anytime soon.

Of course, this isn't Schumer's first Netflix special to every grace the streaming platform. The Leather Special made its debut back in March 2017 and she has been keeping herself busy with various other projects ever since. This includes costarring alongside Goldie Hawn in the movie Snatched in 2017 and serving as the leading lady in the 2018 romantic comedy I Feel Pretty. And now with this new Netflix project, it's looking like 2019 could prove to be Schumer's best year yet. March 19 can't get here fast enough.