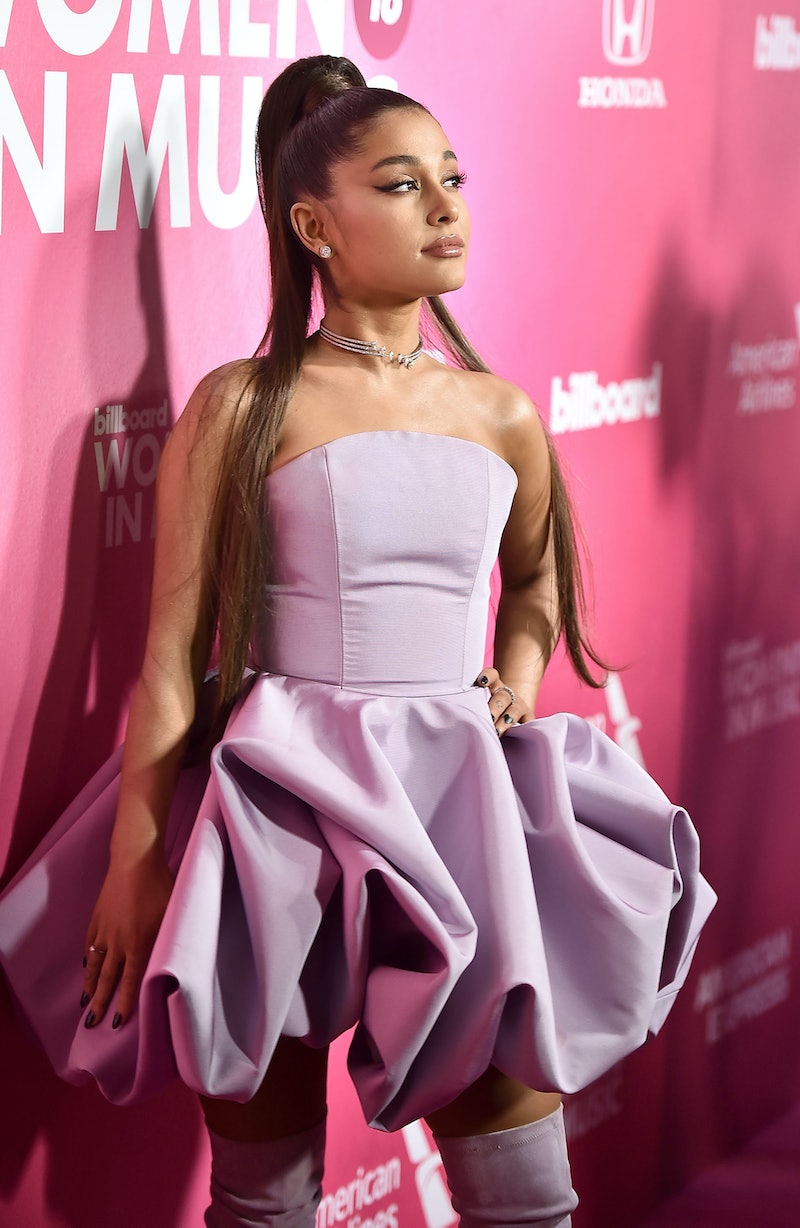 Mild spoilers ahead. The new Men in Black movie might switch things up from the first three films with a couple of brand new stars, but everything else is about the same: There's a mission involving otherworldly beings. There are black suits and sunglasses. And there's a running joke about some celebrities actually being aliens who have taken on human form. This time around, one of those celebs is Ariana Grande, who gets a shoutout in Men in Black: International.

The basic premise of this fourth MIB movie is that a woman named Molly (Tessa Thompson) becomes obsessed with finding the Men in Black after an encounter with them as a child. She ends up coming on board with the organization for a probationary period. Now known as Agent M, she starts working with a Man in Black who has been there for a while, known as Agent H (Chris Hemsworth). And then, you know, alien missions ensue.

But it's during Agent M's introduction to the Men in Black world that she finds out that more aliens are living on Earth than she ever imagined. In fact, some of them are disguised as celebrities and are monitored on a big screen at the MIB office. The first celebrity to pop up? Miss "thank u, next" herself. Yep, Ariana Grande is an alien walking this Earth and becoming a hugely successful pop star while she's at it. She does have a song called "NASA" — and actually visited NASA — so the space interest in there. Plus, I mean...

The proof was always there.

Next up, the screen shows Elon Musk, which checks out, but, dude, you aren't hiding it well. And following Musk is Donald Glover, about whom Agent M says, "That actually makes sense." M doesn't explain herself, but maybe it's clear he's an alien because he's talented in so many ways. Or maybe it's because he's so comfortable in outer space.

These are the main glimpses of the celebrity alien watch screen that audiences get in the movie, but it does show up in the background of another scene later in the film. It's a quick flash this time around, but it looks like filmmaker J.J. Abrams is also an alien. Again, makes sense for a few reasons.

This joke of celebs being aliens started with the first Men in Black movie in 1997. In that movie, the aliens mentioned included Danny DeVito, Al Roker, Newt Gingrich, Dionne Warwick, George Lucas, and Steven Spielberg, the latter of whom executive produced the movie. In Men in Black II, Michael Jackson showed up as an undercover alien agent. In the third movie, Lady Gaga, Justin Bieber, and Tim Burton were aliens.

But aliens don't have to disguise themselves as celebrities. (I guess just the ones who are already really talented entertainers do?) They can also disguise themselves as animals, as shown through Frank the Pug, a character from the first movie, who also has a cameo in MIB: International. The aliens can also just walk around in their alien form as long as they're careful. One alien in the new movie even pretends to be someone's beard, thanks to his furry appearances.

Men in Black: International comes out on June 14, so maybe if the celebrity aliens featured see it — or if someone tells them about it — they'll let us know what they think. I would imagine the space-loving Grande would be pretty excited.