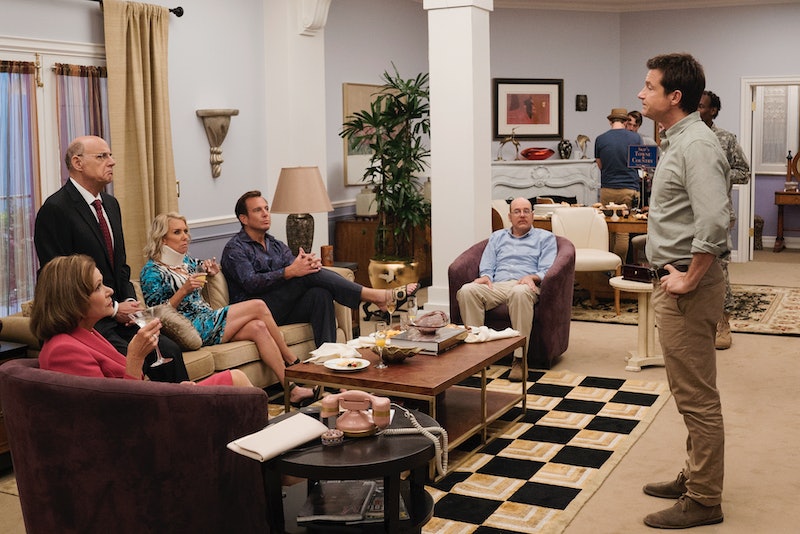 The Bluths are back, and they're coming for America. On May 7, Netflix dropped the official trailer for Arrested Development Season 5, and fans will instantly be able to tell that this dysfunctional TV family is just as dysfunctional as ever — even more so, actually.

The just-released trailer is set to the 1983 Naked Eyes cover track "(There's) Always Something There To Remind Me," and for Michael Bluth (Jason Bateman) and family — George Michael (Michael Cera), mother Lucille (Jessica Walter), George Sr. (Jeffrey Tambor), Lindsay (Portia de Rossi), Buster (Tony Hale), Gob (Will Arnett), Maeby (Alia Shawkat), and Tobias (David Cross) — that certainly seems to be the case. No matter how many times Michael tries to walk away. In fact, Michael tries to walk away almost immediately after returning in the first clip of Season 5. Michael enters a hotel conference room, and is greeted by George Sr. and Lucille.

"We're shooting footage for Lindsay," George Sr. informs him. "Campaign footage!" Lucille exclaims. "You're running for office?" Michael asks his sister, as viewers get a glimpse of a sign that reads, "Lindsay Bluth For Congress" in the background. "I wanna be part of the problem, Michael," Lindsay says. Sounds about right.

Michael then intercepts his son George Michael in the hallway. "Good, get your stuff, let's get out of here," he says. This is not the first time Michael Bluth has tried to do this — avoid family drama before becoming inescapably entrenched in it — and it's probably safe to assume that it won't be the last time, either.

The rest of the Arrested Development Season 5 trailer is kind of a confusing blur of flashbacks and quick glimpses of Maeby in various disguises. One thing fans do learn, however, is that the Bluths are getting an award for Family of the Year. What a momentous occasion. Gob is especially pumped. Wait, correction: The Bluths are giving themselves an award for "Family of the Year." Oh. Ok.

Silver lining: Fans can cast actual votes to make sure that the fake award becomes a really fake reality by heading over to votebluth.com. Not that it matters, because — to reiterate — they're giving the award to themselves. And they don't care about your vote.

The website does have a bunch of fun "easter eggs" and downloadable graphics, though. The site also lists a bunch of "campaign trail" stops, which apparently includes a real-life U.S. tour of Michael's stair-car, as well as Never Nude meet-ups across the country.

And, in case you were wondering why the Bluths think that they deserve a Family of the Year award — first of all, have you met them? — they'll happily tell you themselves. "We always say, 'Family first,'" the Vote Bluth website reads. "That what we always say, we stand by it because we always say it and that's why we deserve this award."

"We're a family of Milford men, philanthropists, magicians (NOT CLOWNS), scholars, pan-sexual bazaar performers, Army veterans, and most importantly, a family that loves family," the site continues. "Even sometimes their own!"

Fun fact: If you click on the word "loves" in this section on the website — which isn't clearly hyperlinked — a new window will open, and a typed-up stage direction reads: "Lucille realizes what she said and starts laughing." See? An Easter egg.

Netflix will release Season 5 of Arrested Development on May 29, and — as per the trailer and a May 4 confirmation from Netflix — Jeffrey Tambor (who plays George Bluth Sr.) will clearly be returning to the show, which raised some eyebrows on Twitter. In mid-February, Tambor was fired from Amazon's Transparent after being accused of sexual harassment by multiple women. Tambor, for his part, denied the allegations in a statement to Deadline. (Netflix declined to comment on Tambor's presence on the show when Bustle reached out.)

It's unclear how much of a role Tambor will play in the new season, though. And honestly, very few things are clear about Season 5, based on the new trailer. Fans will just have to wait and see, but hilarity will undoubtedly ensue.

More like this
Netflix Just Revealed When 'Never Have I Ever' Seasons 3 Will Premiere
By Gretchen Smail and Alyssa Lapid
Nadia's Breakups On 'Indian Matchmaking' Haven’t Stopped Her Search For A Husband
By Amanda Whiting and Brad Witter
Watch The Trailer For Netflix’s Edgy New Comedy 'FAKES'
By Brad Witter
Does 'Locke & Key’s Ending Mean There Could Be A Season 4?
By Sophia Moore
Get Even More From Bustle — Sign Up For The Newsletter