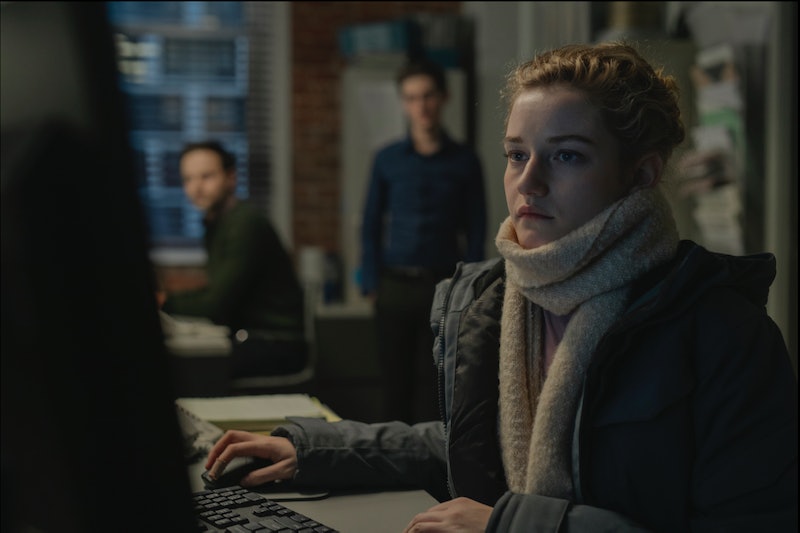 Anyone who's ever been an assistant in a high-demand industry will understand the chilling dread that permeates the trailer for The Assistant. The film, opening Jan. 31, stars Julia Garner as Jane: an entry-level assistant in the entertainment industry. As a recent college grad and aspiring film producer, Jane is lucky to have landed a gig working for one of the most powerful moguls in the business. But underneath Jane's dull daily tasks of making coffee and copies lies a sinister story. In fact, taking one look at the trailer — in which misogyny is commonplace and sexual harassment isn't taken seriously — you might wonder, is The Assistant based on a true story?

Yes and no. The answer is more complicated than it seems. The trailer's jokes of the casting couch and Jane's boss's overall threatening presence and hostility may bring to mind the accusations made against Hollywood mega-producer Harvey Weinstein, but the film itself isn't based on any one specific person. The Assistant's Australian writer-director Kitty Green did, however, interview many assistants in a multitude of industries about their experiences. Shen then created a fictional story that captures the decayed atmosphere hidden under the glitz and glamour of the entertainment industry.

It's no surprise that, for her first narrative feature film, Green turned to a semi-true story. Her previous films, the documentaries Casting Jon Benet and Ukraine is Not a Brothel, tackled numerous ways in which women and young girls can be made victims of the entertainment industry. When the accusations against Weinstein hit the news, Green, was working on another non-fiction project about consent. But as each #MeToo story was told and more and more female actors came forward, Green changed her plans.

"I was on my phone the whole time just reading all of this stuff," she told Deadline. "I mean, I felt like I have a close connection to people that worked for [Weinstein], and people that have experienced misconduct in the film industry, so immediately I shifted my focus to Hollywood and the film industry, and that's sort of where it began, and then I started interviewing and the research process."

Green's interviewees included those who worked at The Weinstein Company and its predecessor, Miramax, but emphasized that the type of abusive and illegal behavior displayed in The Assistant doesn't just happen in the film and TV industries.

"I feel like it would reductive to say it's about The Weinstein Company or any specific one because it is a problem everywhere," she told Deadline.

Reading the accounts of the multitude of women who have accused Weinstein of sexual assault, rape, or sexual harassment, one recurring detail that comes up in many of them is the presence of a young, female assistant. That these young women could somehow aid Weinstein in his deeds seems unconscionable. But what The Assistant does is present the audience with the idea that these young women were in the same precarious positions as his accusers.

"When I was reading everything in the media, I noticed the people were quick to call the people that worked at those companies enablers, and I thought it was more complicated than that," Green told Deadline. "I don't think somebody in Jane's position is a bad person. I think that sometimes she can be kind of drawn into a complicit position over time unwittingly, so I wanted to explore that."

The Assistant may not be based on any one individual person, story, or encounter, but with Weinstein's trial set to begin on Jan 22, it certainly is timely.