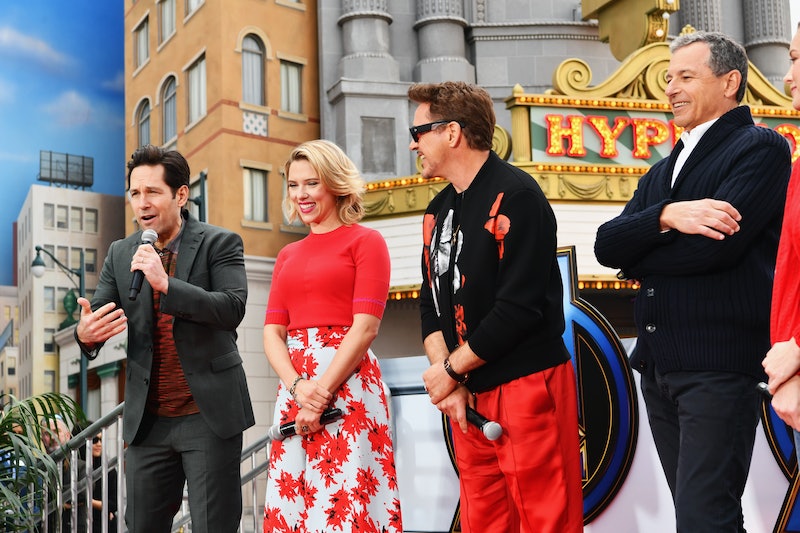 The Avengers united for a good cause on Friday, April 5. As reported by the AP, some of the Avengers: Endgame stars supported a $5 million donation to help children in hospitals all around the world by unveiling the gift at Disney Resort in Anaheim, California. Robert Downey Jr., Chris Hemsworth, Scarlett Johansson, Jeremy Renner, Paul Rudd, and Brie Larson were all there for the event which included a special visit with members of the local Boys & Girls Clubs at Downtown Disney's LEGO store. That means a group of lucky kids got to hang out with the Avengers and play with new toys from the upcoming movie, A.K.A. have the best day ever.

According to the AP, the donation will send money as well as toys and merchandise from Avengers: Engame to hospitals around the world. The non-profit resort Give Kids the World, located in Florida, will also receive part of the donation to further their goal of providing all-expense paid week long vacations for children with critical illnesses and their families. Disney contributed $1 million, while The LEGO group, Hasbro, Funko and Amazon collaborated on the rest of the donation.

Per People, Robert A. Iger, chairman and CEO of The Walt Disney Company said in a press release, "The superheroes in Avengers personify traits like courage, perseverance, bravery and hope — the same traits countless kids and their families in children's hospitals exhibit every day. We are grateful to have the Avengers cast take time out of their day to be a part of this effort to lift spirits and bring comfort to children during a difficult time."

As for the Avengers themselves, they seemed to relish the chance to give back to their young fans. Johansson told the AP, "It's not a bad day in the office when you get to come to Disneyland. I've been a huge fan of Disney for like forever. I come from a big, Disney loving family. To be here with my fellow Avengers and all these kids, it's just great. It's such a great way to spend the day."

Downey, Jr. added, "More than any time, it’s a time to give back to these courageous kids who inspire us." In photos from the event, the Iron Man actor and his co-stars are seen doing just that — and grinning their way through every sweet meet and greet.

Rudd, in particular, seemed to be channeling his trademark humor into the event. "I'm grateful and touched to be a part of this group," he said. "I work with a lot of kids and families. It's not just the kids. It's the entire family. The parents, the brothers, the sisters. This is a real honor to give back. I would like to say the Ant-Man toy is particularly small. So when you’re walking around barefoot, just be careful. It's a little bit like stepping on a LEGO." Is it possible that he's the actual Ant-Man? Because that's totally something Scott Lang would say.

Everyone knows Larson, Hemsworth, and the rest of the cast are experts at playing heroes on the big screen. But their off-screen actions show that these actors are pretty heroic in real life too.