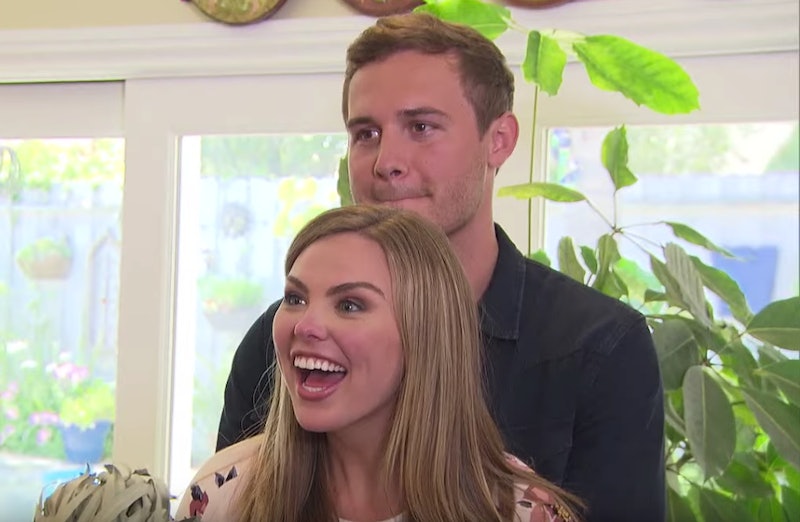 A show like The Bachelor or The Bachelorette isn't really about one relationship — it's about 29 breakups. And now that Hannah's season of The Bachelorette is coming to an end, those breakups are coming fast and furious. With four contestants left, Hannah has to dump three (or potentially even four) of them, and that means that many of the men's futures are up in the air. Like Peter. Sweet, sweet Peter. Too-good-for-this-world Peter, the Delta airline pilot. Can Peter go all the way and propose to Hannah? Or will Peter be on Bachelor In Paradise, searching for love with other castoffs from previous seasons? Right now, it's really hard to tell.

Hannah has absolutely electric chemistry with some of the men on her season, and Peter is honestly not at the top of that list. Have you seen the way Hannah is with Tyler C.? There's some serious sexual tension between them, as evidenced by that steamy backseat makeout they had on last week's hometown date. Still, Hannah is also very attracted to Peter, and while physical attraction alone doesn't necessarily denote a successful long-term relationship, it certainly doesn't hurt.

Peter is handsome, loyal, reliable, sweet, and sexy. Plus, his family seems pretty great. He could be a really great match for Hannah, and it's possible that in the end, she'll see that too. However, it's just as possible that she'll pick one of the other men (except for maybe Luke P., who based on promos, pretty obviously seems to be going home soon after another explosive argument). And if he does end up getting sent home, Peter should absolutely try his luck on Bachelor In Paradise.

There's a reason why Bachelor In Paradise has given rise to some of the most successful couples in Bachelor Nation — the pressure is completely off. Bachelor In Paradise is mostly about debauchery and bikinis, but really, it allows the contestants to know each other on a more relaxed basis. Don't like that guy? Talk to another one. Don't want to date that girl again? Don't have to! Its slow and steady (or as slow and steady as reality TV can be) pace lets relationships develop more organically, thus making them a bit more transferrable to the real world. Look at Jade and Tanner! And Carly and Evan!

This is the kind of pace that Peter needs to find love. No breakneck dates and competing with 29 other men for a shot with the same woman. No, Peter needs his own time to shine and meet people. Have dinner. Talk on the sand at sunset. Hold court with some crabs. You know, the usual. Bachelor In Paradise is the perfect place for Peter to find the right woman for him, should this whole thing with Hannah not work out. And while viewers won't know the entire Bachelor In Paradise cast until Hannah's season is over, you can bet that most fans won't be upset if Peter ends up on the beach.