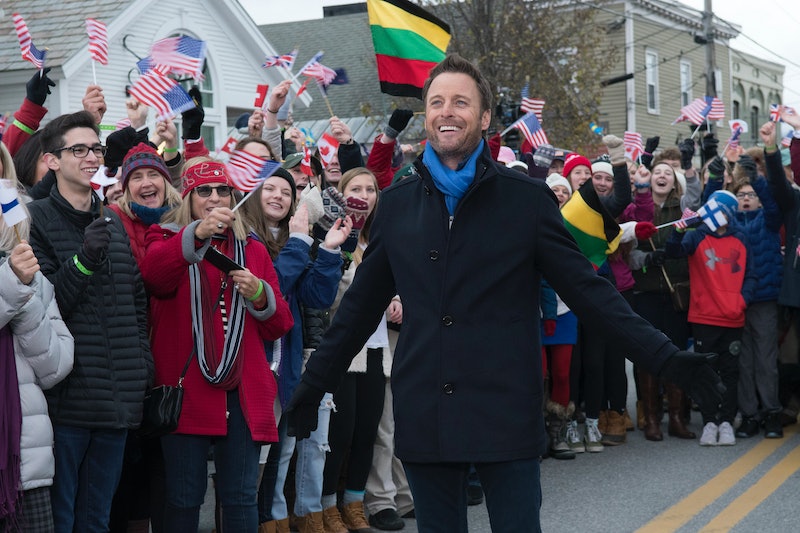 The first preview for Bachelor Winter Games dropped on Monday, Jan. 8, and it definitely shows the franchise will heat up the winter nights ahead. In keeping with the Winter Olympics theme of Bachelor Winter Games (get it?), the preview shows former Bachelor (producer: Nikki Lazaran) and Bachelorette (associate producer: Megan Kropf) faves dressed in hats, gloves, and heavy coats, as well as marching in a parade that looks reminiscent of the Olympics' Parade of Nations, which usually takes place during the opening ceremony. "Bachelor Nation meets Bachelor International," the preview promises, meaning that the competition isn't just between USA Bachelor faves. According to Entertainment Weekly, reality stars from Bachelor franchises in New Zealand, Canada, Sweden, Japan, China, and more are invited to heat things up.

"They'll compete to fall in love and they'll fall all right — we promise," the preview video states, showing several constants skiing (and falling) in the snow.

But the preview assures fans that it's not going to be all fun and games — there will be drama. "Winter tears are coming," the preview's narrator states, perhaps in a nod to Game of Thrones' longtime tagline. And yep, among them are the flowing tears of Bachelor fan fave Ashley I. "I'm always friend-zoned," Ashley I. says in the preview, while in tears. "I'm just so confused."

Many other Bachelor favorites will also be competing in USA men's and women's teams, including Ben Higgins, Dean Unglert, Eric Bigger, Jamey Kocan, Luke Pell, Clare Crawley, and so many more. The Bachelor International men's and women's teams will introduce some new faces from around the globe. American audiences will meet Jordan Mauger, the star of The Bachelor New Zealand Season 2, Courtney Dober of The Bachelorette Australia Season 2, and Kevin Wendt of The Bachelorette Canada Season 1. And who knows — some of these international Bachelor stars could wind up becoming American favorites before we know it.

As ABC stated in a press release, "Throughout the run of The Bachelor Winter Games, fans can expect twists and turns on and off the ski mountain, as well as romance, heartbreak, love and, of course, roses." The contestants will compete in Winter Olympics-inspired games, but they'll also engage in, you know, the game of love. Could there be new love connections made between the international and USA teams? It seems like anything will be possible in this new Bachelor series, including more tears and on-screen drama (of course).

And fans already can't wait. Some fans have expressed their joy about certain cast members via Twitter.

Some fans just voiced their excitement about Bachelor Winter Games in general.

Some fans still had questions, even after the preview video was released.

And this fan is already making plans to celebrate the premiere of a brand new Bachelor TV show.

Fans will have to wait it out until Feb. 13, when Bachelor Winter Games premieres on ABC. Yup, and that's in addition to Arie Luyendyk season of The Bachelor, which is currently airing. That's twice as much Bachelor every week to heat up your winter nights.