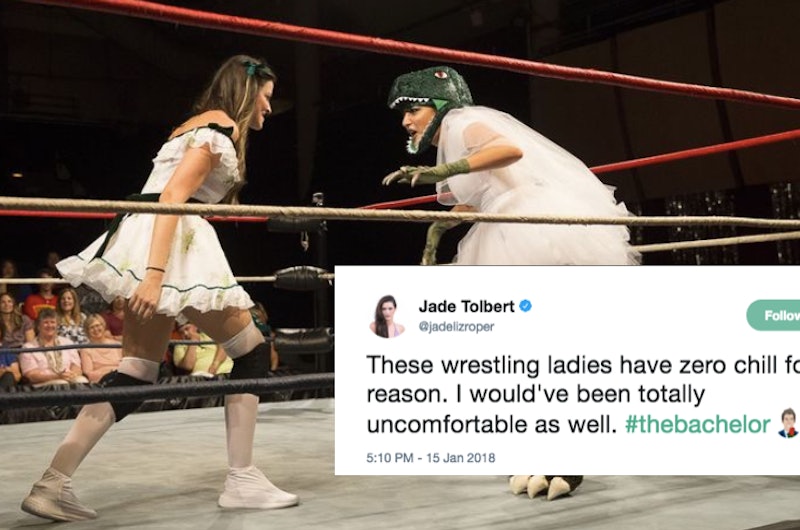 The premise of The Bachelor is strange enough, if you think about it, and Arie's season keeps doing the strangest group dates in recent memory. The season's first Bachelor group date involved "bumper car trauma" and a demolition derby, and the second one... well, the second one was worse. Arie's Bachelor wrestling date made a few of the women very, very uncomfortable, to the point of tears. Viewers at home were uncomfortable, too, and they didn't hold back about their feelings, either.

The demolition derby could have been fun, I guess, but the wrestling started out on the wrong foot. The women from the 1980s show Gorgeous Ladies of Wrestling (aka GLOW, the basis for the show of the same name) came to teach the women on the group date how to wrestle, which seems fun... until it wasn't. Not only did the women heckle Tia and Bibiana until they were in tears, but they also made it seem like Tia and Bibiana were the ones with the problem. Now, while the point of their haranguing was probably to inspire Tia and Bibiana to participate more fully, calling Tia "pathetic" and asking Bibiana if her mother knew how to spell since she has such a "weird" name is a step too far.

Reality television is made to throw its participants off their centers — that's what makes good television. But those strange or uncommon situations should never make its participants feel uncomfortable, and fans weren't OK with what they saw the ladies say to the contestants.

Some Called It The Worst Date Ever

And Others Thought It Was Super Messed Up

Bachelor Alumni Weighed In, Too

When women who were on The Bachelor, who have gone through the weird experience of being on The Bachelor, are condemning this date, that's something to pay attention to. Ashley, Jade, and Rachel all know how it works. They've seen the sausage get made. They've stood at rose ceremonies for a month straight. The Bachelor experience is strange enough not to deal with this sort of thing.

Women put up with a lot of things in daily life in the name of being polite. They speak to people they otherwise wouldn't talk to; they give out phone numbers so they won't seem mean; they go along with dates and sexual encounters so they won't get called a "bitch." So often, that little voice that says, "I'm not OK with this" is ignored, and frankly, for Tia and Bibiana to hear that voice and listen is a great thing. That voice is there for a reason, and those years of tempering it have to be overcome. Anyone, anytime is well within his or her right to leave a situation in which he or she feels uncomfortable. If this was one of those times for Tia and Bibiana, so be it. And good for them.

To be on The Bachelor, you have to give up control of a good part of your life — you put your whole life on pause to do this, but there are limits for everyone. Tia and Bibiana hit theirs, and women and fans at home, watching from the comfort of their couches, recognized that this date was more than they signed up for. Reality television exists in order to take away some part of a person's agency as means of entertainment, but it should never make people feel unsafe or uneasy. That's not entertainment. The GLOW ladies who visited The Bachelor certainly struck out on this group wrestling date, and plenty of fans noticed. Hopefully Tia and Bibiana — or anyone — won't have to be put through that again.