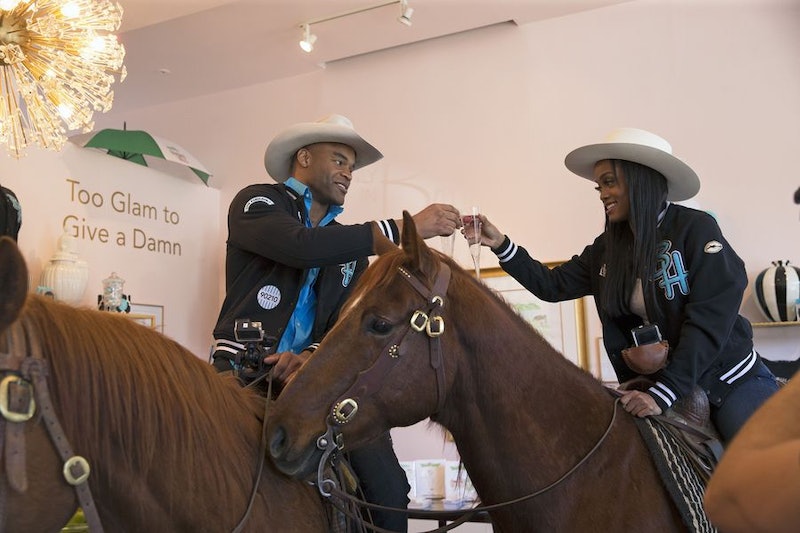 A couple months ago, a meme took Twitter by storm and, unlike most memes that I want out of my life almost immediately, I haven't been able to shake this one: "This is the future that liberals want." It was meant to be negative, but it was reshaped, first by people who saw that the original tweet actually did show the future liberals want, then into a caption for pictures of anything fun and positive — like a pug riding a donkey, for instance. And when I watched Bachelorette Rachel Lindsay ride horses down Rodeo Drive with her date, Anthony, Monday night, the meme popped into my head yet again. The future that liberals want was represented by two black people riding horses through one of the best known shopping districts in the world like it was totally normal.

I imagine that anyone riding horses straight into clothing stores while being followed by a camera crew would draw a lot of attention — the horses pooped on the floor, y'all — but there was something special about seeing the first black Bachelorette do this on a one-on-one date with a black contestant that really got me going all, "Yesssss, girl!" on my couch.

For one, I know that some passersby had to be watching them thinking, "What the eff are these black people doing going into stores on horses?" Like Rachel said, she and Anthony were "snapping necks," which hinted to me that she also was aware of the extra attention. And, two, I loved that there were also so many people who recognized her and were yelling out of car (and school bus) windows, "It's Rachel!" (And these are people who hadn't even seen both of the badass speeches she gave to DeMario yet.) She deserves to be such a beloved Bachelorette, so it was amazing to see that so many people were excited about her even before her season started airing.

But on top of all of this, I couldn't help but think about the longstanding issue that black people face of being followed around or looked at suspiciously in stores even though they're just shopping like anyone else. Barack Obama has said that it's happened to him. Oprah Winfrey claimed she was racially profiled when a store clerk thought she wouldn't be able to afford a bag. Gabourey Sidebe wrote about incidents where she was made to feel like a suspect happening all throughout her life, before and after she was famous.

Black people sometimes try to make themselves look less suspicious (even though they aren't suspicious and literally only look "suspicious" because they're black) when they go into nice stores to try to prevent this. Writer Angela Fichter wrote in a piece on The Establishment,

"Over the years, I’ve avoided entering certain stores or shopped with friends to ease the anxiety of being profiled. When I’ve shopped alone, I’ve sometimes elected to wear a trench coat and a designer purse I got from my mother, in some twisted effort to prove that I belong there  —  to look like I can afford whatever is in the store."

Sidebe wrote in her essay for Lenny Letter:

No matter how dressed up I get, I'm never going to be able to dress up my skin color to look like what certain people perceive to be an actual customer. Depending on the store, I either look like a thief or a waste of time. There doesn't seem to be a middle ground between no attention and too much attention.

And comedian Phoebe Robinson joked about the situation in her book, You Can't Touch My Hair, writing,

So I don't care how much dad rock I listen to or how many basic Chris Pine-looking dudes I date, I'm black and I have the receipts to prove it. Literally, I keep all my receipts in order to prove that I'm not stealing from whatever store I walk out of.

If you need even more evidence, a 2007 study of 500 Philadelphia-area residents found that black people were 10 times more likely than non-black people to say they had been profiled while shopping, as the International Business Times reports.

So, yeah, it's a thing. And seeing Rachel and Anthony exist in a situation where not only did they not have to deal with the whole "shopping while black" non-sense, but also were drawing so much attention to themselves by being on huge horses in a cars-and-pedestrians-only zone, really stood out to me in a way that, say, JoJo Fletcher and Jordan Rodgers on horses would not have. I hope Rachel and Anthony felt amazing trotting down the street, and I hope that we're all looking toward a future where everyone can feel comfortable in much more normal situations. Like, you know, walking into a store and buying clothes without a horse.