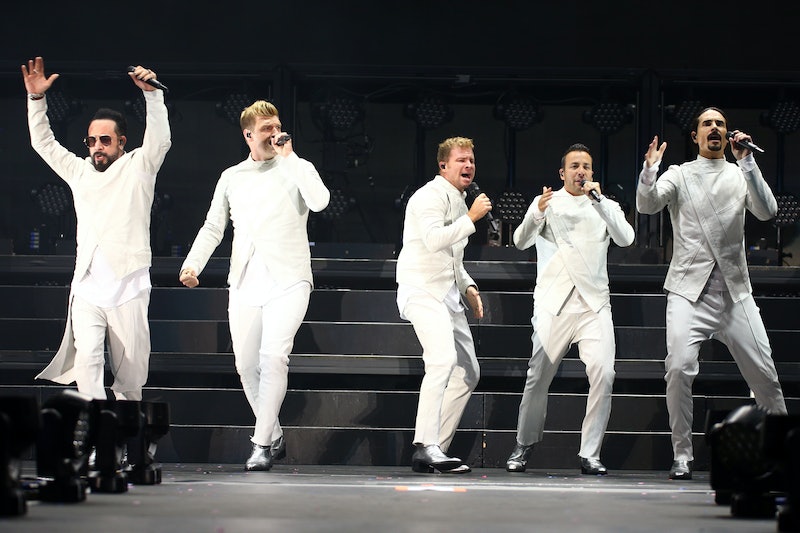 This tidbit about the Backstreet Boys’ greatest ballad will break your heart. And, yes, it will make you cry — no, not that ballad. In a recent Us Weekly interview Nick Carter said the “I Want It That Way” music video wasn't exactly the group's favorite video. Let's just rip the Band-Aid off and get to it: Carter told the publication that the boy band thought the video for the first single off of Millennium wasn’t that great. Oh, and he also said they weren’t into the choreography that really takes the video to another plane.

Fasten your seatbelt and make sure your tray table is in the upright and locked position, because some pop music history turbulence is ahead. Carter told Us Weekly,

“I just remember having to film the music video in-between doing a lot of stuff. I don’t remember traveling but I remember coming in and working up a choreography routine at the last-minute. I think we felt that it was super cheesy and it was something that was unnecessary. It was kind of like we didn’t want to do it.”

Bone-chilling. What if they never did the "I Want It That Way" dance moves? Could you imagine a world in which we never got this moment?

“Later on it was one of the most iconic scenes when the chorus hit. It didn’t feel as epic as some of our other videos that we had done prior to it. [We felt] like it wasn’t the greatest music video — at all. And we didn’t feel like we lived up to it.”

Yes, he really said they felt like it wasn't the greatest music video. Wow. No, it may not be the greatest music video (no offense meant to BSB, but uh, "Thriller" by Michael Jackson is impossible to top), but it's definitely one of the greats. And yet, the Backstreet Boys weren't obsessed with the video. They didn't like it, they weren't proud of it, they didn't fall head-over-heels for those dance moves, and nothing feels right. Of course, they are more than entitled to their feelings. If the video wasn't their jam, then the video wasn't their jam. However, that doesn't make this revelation any easier to digest.

This isn’t the first time a member of the quintet has shared some behind-the-scenes details about this 18-year-old tune. When The Huffington Post asked the group about the nebulous lyrics to “I Want It That Way” in 2016, they said they knew the words didn’t totally add up. And they were OK with that. The Boys of Backstreet had a chance to alter Andreas Carlsson and Max Martin’s lyrics, but ultimately decided to stick with the original version because, as Kevin Richardson put it, “sometimes you just got to go with what feels right.” Some might say they wanted “I Want It That Way” that way.

BSB did record a second version of the song with different lyrics “to make the song make more sense,” but it didn’t speak to the shape of the group’s heart. A.J. McLean explained,

“I don’t think that it would have ended up the way that it did had we gone with the proper version. I guess you could say, you know, the one that made sense.”

This is factoid is chill. As for the factoid about the band thinking the dancing in the video was "super cheesy"? Not so chill.

Directed by the legendary Wayne Isham, the music video follows BSB around LAX as they sing, dance, and slow-mo walk their way on over to their private plane. There are smoldering stares, fedoras, coordinating ensembles, special effects that make the guys fade away like ghosts, perfect choreo — it's so good. All of it is so good.

"I Want it That Way" ruled the Total Request Live countdown in 1999, pop-punk trio Blink-182 parodied it in the video for “All the Small Things,” it won a VMA, and the choreo is part of BSB’s ongoing Las Vegas residency. On the final episode of the original TRL, the show named “I Want It That Way” the third-most iconic music video to grace the countdown. Its legacy is no joke.

Now, if by "wasn’t the greatest music video" Carter actually meant "one of the best videos of the late '90s and one of the most important pop videos," then you can't argue with that.

More like this
The Spice Girls Just Dropped A Brand New Music Video
By Sam Ramsden
Kate Bush Revealed The Real Meaning Behind 'Running Up That Hill' Lyrics
By Darshita Goyal
What Does Nancy Jo Sales Think Of 'The Real Bling Ring'?
By The Editors
12 ’90s Movie References You Missed In 'Do Revenge'
By Radhika Menon
Get Even More From Bustle — Sign Up For The Newsletter