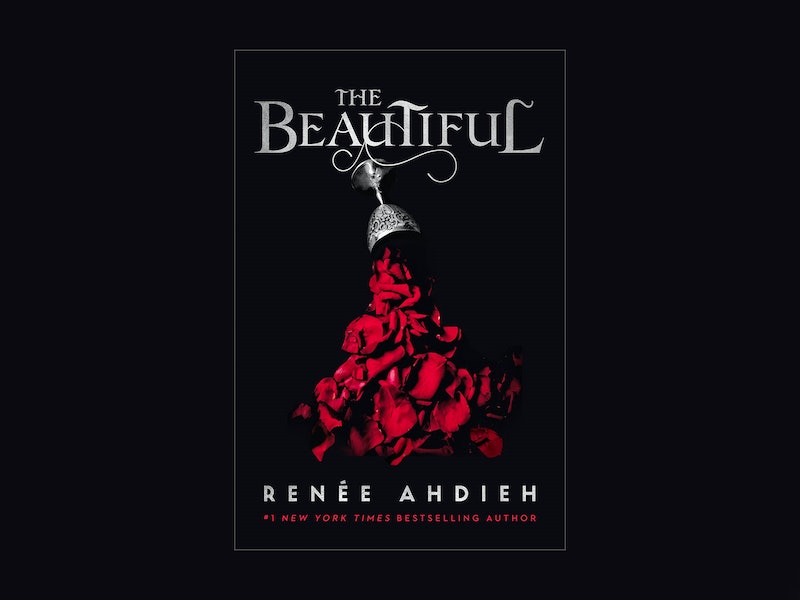 If you thought that the vampires in YA trend was long-over, YA author Renee Ahdieh is about to make your day. You probably recognize Ahdieh by her YA retellings — including The Wrath and the Dawn series, inspired by Arabian Nights, and the Flame in the Mist duology, inspired by the story of Mulan. Now, Ahdieh has set her sights on the legend of the vampire with The Beautiful, due to hit shelves on Oct. 8, 2019. If the plot summary is any indication, she's leaning more toward the Anne Rice genre of vampires than, say, Twilight. Bustle has the exclusive cover reveal and excerpt below!

Here's the plot: In 1872, New Orleans is a city ruled by the dead. But to 17-year-old Celine Rousseau, New Orleans provides her a refuge after she's forced to flee her life as a dressmaker in Paris. Taken in by the sisters of the Ursuline convent, Celine soon becomes embroiled in the city's glitzy underworld, known as La Cour des Lions, after catching the eye of the group's leader, Sébastien Saint Germain. When the body of one of the girls from the convent is found in the lair of La Cour des Lions, Celine battles her attraction to him and suspicions about Sébastien's guilt... along with the shame of her own horrible secret.

The Beautiful promises to be a spooky, fun romp through New Orleans, underground vampire lairs. And, of course, you can depend on there being some seriously sultry romance — and the gorgeous cover below definitely fits that theme. If you aren't already hooked, read the excerpt below and add The Beautiful to your shelf come Oct. 8!

New Orleans is a city ruled by the dead.

I remember the moment I first heard someone say this. The old man meant to frighten me. He said there was a time when coffins sprang from the ground following a heavy rain, the dead flooding the city streets. He claimed to know of a Créole woman on Rue Dauphine who could commune with spirits in the afterlife.

I believe in magic. In a city rife with illusionists, it’s impossible to doubt its existence. But I didn’t believe this man. Be faithful, he warned. For the faithless are alone in death, blind and terrified.

I feigned shock at his words. In truth, I found him amusing. He was the sort to scare errant young souls with stories of a shadowy creature lurking in darkened alcoves. But I was also intrigued, for I possess an errant young soul of my own. From childhood, I hid it beneath pressed garments and polished words, but it persisted in plaguing me. It called to me like a Siren, driving me to dash all pretense against the rocks and surrender to my true nature.

It drove me to where I am now. But I am not ungrateful. For it brought to bear two of my deepest truths: I will always possess an errant young soul, no matter my age.

And I will always be the shadowy creature in darkened alcoves, waiting...

I believe in magic. In a city rife with illusionists, it’s impossible to doubt its existence.

aboard the CGT Aramis

Not What It Seemed

The Aramis was supposed to arrive at first light, like it did in Celine’s dreams.

She would wake beneath a sunlit sky, the brine of the ocean winding through her nose, the city looming bright on the horizon.

Filled with promise. And absolution.

Instead the brass bell on the bow of the Aramis tolled in the twilight hour, the time of day her friend, Pippa, called “The Gloaming.” It was — in Celine’s mind — a very British thing to say.

She’d begun collecting these phrases not long after she’d met Pippa four weeks ago, when the Aramis had docked for two days in Liverpool. Her favorite so far was “not bloody likely.” Celine didn’t know why they mattered to her at the time. Perhaps it was because she thought Very British Things would serve her better in America than the Very French Things she was apt to say.

The moment Celine heard the bell clang, she made her way portside, Pippa’s light footsteps trailing in her wake. Inky tendrils of darkness fanned out across the sky, a ghostly mist shrouding the Crescent City. The air thickened as the two girls listened to the Aramis sluice through the waters of the Mississippi, drawing closer to New Orleans. Farther from the lives they’d left behind.

"The air thickened as the two girls listened to the Aramis sluice through the waters of the Mississippi, drawing closer to New Orleans. Farther from the lives they’d left behind."

Pippa sniffed and rubbed her nose. In that instant, she looked younger than her sixteen years. “For all the stories, it’s not as pretty as I thought it would be.”

“It’s exactly what I thought it would be,” Celine said in a reassuring tone.

“Don’t lie.” Pippa glanced at her sidelong. “It won’t make me feel better.”

“So is being obnoxious.”

Pippa coughed, trying to mask her amusement. “You’re terrible. The sisters at the Ursuline convent won’t know what to do with you.”

“They’ll do the same thing they do with every unmarried girl who disembarks in New Orleans, carrying with her all her worldly possessions: They’ll find me a husband.” Celine refrained from frowning. This had been her choice. The best of the worst.

“They’ll do the same thing they do with every unmarried girl who disembarks in New Orleans, carrying with her all her worldly possessions: They’ll find me a husband."

“If you strike them as ungodly, they’ll match you with the ugliest fool in Christendom. Definitely someone with a bulbous nose and a paunch.”

“Better an ugly man than a boring one. And a paunch means he eats well, so... ” Celine canted her head to one side.

Celine smiled at her friend. “I’d wager you haven’t met many French girls.”

“At least not ones who speak English as well as you do. Almost as if you were born to it.”

“My father thought it was important for me to learn.” Celine lifted one shoulder, as though this were the whole of it, instead of barely half. At the mention of her father — a staid Frenchman who’d studied linguistics at Oxford — a shadow threatened to descend. A sadness with a weight Celine could not yet bear. She fixed a wry grin on her face.

Pippa crossed her arms as though she were hugging herself. Worry gathered beneath the fringe of blonde on her forehead as the two girls continued studying the city in the distance. Every young woman on board had heard the whispered accounts. At sea, the myths they’d shared over cups of gritty, bitter coffee had taken on lives of their own. They’d blended with the stories of the Old World to form richer, darker tales. New Orleans was haunted. Cursed by pirates. Prowled by scalawags. A last refuge for those who believed in magic and mysticism. Why, there was even talk of women possessing as much power and influence as that of any man.

"New Orleans was haunted. Cursed by pirates. Prowled by scalawags. A last refuge for those who believed in magic and mysticism."

Celine had laughed at this. As she’d dared to hope. Perhaps New Orleans was not what it seemed, at first glance. Fittingly, neither was she.

And if anything could be said about the young travelers aboard the Aramis, the possibility of magic like this — a world like this — had become a vital thing. Especially for those who wished to shed the specter of their pasts. To become something better and brighter.

And especially for those who wanted to escape.

Pippa and Celine watched as they drew closer to the unknown. To their futures.

Celine did not respond. Night had seeped through the water, like a dark stain across organza. A scraggly sailor balanced along a wooden beam with all the grace of an aerialist while lighting a lamp on the ship’s prow. As if in response, tongues of fire leapt to life across the water, rendering the city in even more ghoulishly green tones.

The bell of the Aramis pealed once more, telling those along the port how far the ship had left to travel. Other passengers made their way from below deck, coming to stand alongside Celine and Pippa, muttering in Portuguese and Spanish, English and French, German and Dutch. Young women who’d taken leaps of faith and left their homelands for new opportunities. Their words melted into a soft cacophony of sound that would — under normal circumstances —soothe Celine.

Ever since that fateful night amid the silks in the atelier, Celine had longed for comfortable silence. It had been weeks since she’d felt safe in the presence of others. Safe with the riot of her own thoughts. The closest she’d ever come to wading through calmer waters had been in the presence of Pippa.

"Ever since that fateful night amid the silks in the atelier, Celine had longed for comfortable silence.

When the ship drew near enough to dock, Pippa took sudden hold of Celine’s wrist, as though to steel herself. Celine gasped. Flinched at the unexpected touch. Like a spray of blood had shot across her face, the salt of it staining her lips.

Breathing through her nose to steady her pulse, Celine wrapped both hands around Pippa’s cold fingers. “I’m frightened, too.”