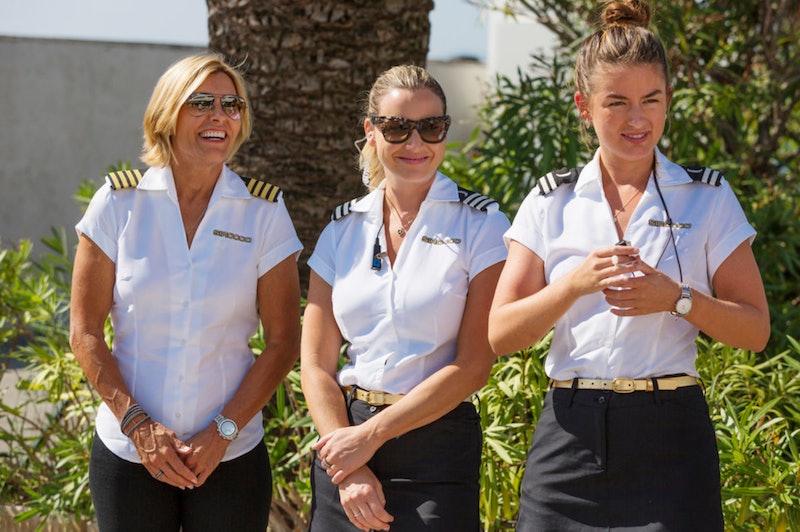 The midseason trailer for Below Deck Mediterranean Season 4 gave fans a heck of a lot to sink their teeth into, but perhaps the most satisfying moment came when Chef Ben Robinson's voice rippled through the French Riviera. Yes, it looks like Chef Ben is back on Below Deck Med in some capacity, and it isn't a moment too soon. At the end of the mid-season trailer, which was first available over at People, a person walks down a dock, presumably toward the Sirocco. We never see the face, but we do hear a familiar voice purr, “‘Ello, lovelies.”

Ben is back, y'all. Whether he is here to take over for third stew-turned-substitute chef Anastasia Surmava, or just to say hey to his old colleagues remains to be seen. Either way, it is such a treat to hear that voice again.

In 2017, Chef Ben, who served as yacht chef on four seasons of Below Deck and Below Deck Med’s first season, confirmed to Bravo's The Daily Dish that he'd stepped away from both reality shows. But he did not step away before he left a sliver of hope: The yachtie teased that he may one day return to the franchise. For a little while now, there have been some whispers in the ocean breeze that Chef Ben may finally be ready to jump into the fray again. Shortly after the fourth season of Below Deck Med premiered, Chef Ben showed up in a photograph with the Below Deck Med Season 4 crew and posted an IG video in which he's wearing a Sirocco crew shirt (you can see a screengrab over at LALATE). Understandably, fans started to suspect something was up.

When Below Deck Med cast members Hannah Ferrier and Colin Macy-O’Toole appeared on AfterBuzz TV’s It’s Bravo Betch in June, they addressed the picture of Chef Ben and the Season 4 cast that launched a thousand yachts. Hannah, who was on the first season of Below Deck Med with Ben, said her former costar happened to be in Monaco while Season 4 was in the middle of filming. “Ben was in Monaco, and we were having a night out, and I decided to invite him," Hannah explained. "I thought he’d like to meet the crew. Me and Ben are still mates. We hang out when I’m in Miami.” Colin added that Ben was in town for a boat show and “reached out, just wanted to have dinner with [the cast] and get to know everybody.” Hannah also confirmed Ben was not brought in to replace Mila Kolomeitseva after the first chef of Season 4. But as for Anastasia? We'll just have to wait and sea, er, see.

Was it really nothing more than a casual dinner with the current cast, or were Hannah and Colin just trying to keep Ben’s return to the Below Deck Med galley under wraps? Let the speculation rage on.

Y'all, you know what this means, right? His iconic laugh will be on TV again. What a dream.

Fans are confident that "'Ello, lovelies" belongs to Chef Ben. Yeah, maybe Bravo hired an impressionist who can do a pitch-perfect impression of Chef Ben, but that'd be a wild move.

Chef Ben is without a doubt a fan favorite, and naturally, lots of fans hope he is back on the series as a full-time cast member.

The Freakout Is Real

Chef Ben is a once-in-a-generation reality star. Every moment he's on the small screen is a gift that is to be treasured.

The Freakout Is Really Real

This is a relatable and reasonable response. When Chef Ben appears on screen unannounced, no remote is safe.

The return of Ben is a powerful thing.

Oh, What A Delight It'll Be To See Hannah & Ben Together Again

Will Season 4 deliver another legendary Hannah and Ben battle like The Great Entrée Vs. Main Course debate? Only time will tell.

Don't Let Us Down, Bravo

Could you imagine if Bravo gave us that teaser only to never give us any Chef Ben on Season 4? *Shudders.*

Look, it would be incredible if Chef Ben were to become the new Season 4 chef (no offense to the wonderful Anastasia), but if he's only just passing through? That's cool, too. Again, any time we get with Chef Ben is a gift to be treasured.

More like this
The 'P-Valley' Season 2 Trailer Teases A Major Shakeup At The Pynk
By Johnny Brayson
What’s New On Netflix: A Victoria Justice Rom-Com & The Return Of David Letterman
By Arya Roshanian
Everything We Know About Chèrie & Jessey’s Abrupt Exit From Bling Empire
By Alyssa Lapid
Twitter Is Upset About The 'American Idol' Top 3 Results: "Who TF Is Voting?"
By Jake Viswanath
Get Even More From Bustle — Sign Up For The Newsletter