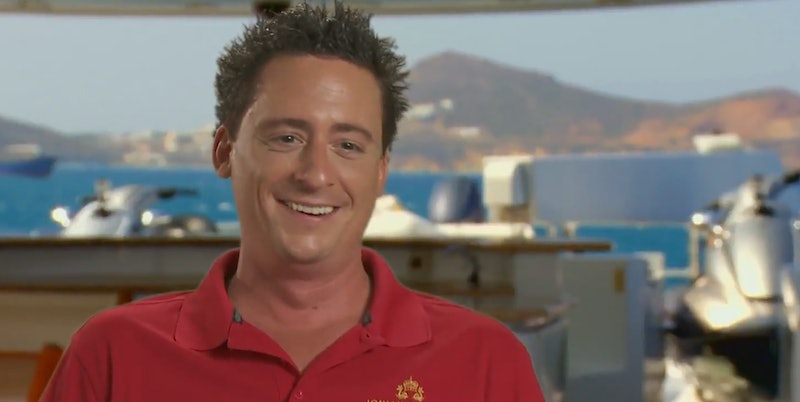 Viewers appreciated Ben Robinson for the culinary talents and drama that he brought to Below Deck and Below Deck Mediterranean, but he is missed now more than ever thanks to the Chef Mila Kolomeitseva's many blunders. It's hard not to wonder what Chef Ben Robinson is up to in 2019, especially since fans suspect that he has a Below Deck comeback in the works. Someone has to take Chef Mila's job, right? Please. Please. Please.

Ben would definitely be on board if Captain Sandy Yawn fired Mila at some point this season. The reality TV alum has been following along with the new Below Deck Med episodes and he has shared his opinions on Twitter. Just like this season's charter guests, Ben is not a fan of Chef Mila's work in the kitchen. During the Season 4 premiere episode, Ben tweeted, "First she’s ill, now it’s tacos... This may not be a healthy start to the season."

In response, a fan asked if Ben will return to the show as Mila's replacement. Unfortunately, Ben shot down the speculation with his reply. Hopefully, he is just coy and lied to keep some storylines under wraps. Otherwise, the yachties are in for some (more) major trouble.

Even though Ben denies the casting change, there is some significant evidence to support the theory. Ben was photographed having dinner with Captain Sandy's whole crew, excluding Mila. Was this a cast outing? What was Ben doing with the Season 4 crew? And why does it seem like he wore a bath robe to dinner?

The second piece of evidence is another photograph. Ben posted a picture wearing shirt that the Sirocco crew members wear. Lala Late shared a screen shot from the Instagram Live video on June 6. Very suspicious. Why does Ben have a Sirocco uniform if he never cooked on that boat? Did Captain Sandy just give him a shirt because she felt bad that he wore a bathrobe to dinner? Or did he acquire one as a member of the crew?

At this point, a reality TV return seems to be more wishful thinking than a confirmed situation given how busy Ben is these days. Ben has his own catering business, based in South Florida. However, he "travels all over the world creating these exclusive, one-of-a-kind events," according to his official website. This means that Below Deck fans can book Ben for his private chef services (as long as the budget allows for it, of course). If it's not possible to book Ben for an event, he does sell his own signature knives and an apron with his face on it.

When he's not traveling for work, Ben does make time to watch Below Deck on Bravo. He even watched with Season 6 with cast member Ross Inia because, yes, somehow, all of these yachties know each other.

Below Deck Med viewers will continue to hope that the Ben replacement rumors are true. Even if they aren't, fans should be happy to know that Ben is living his best life, capitalizing on his Below Deck experience, without leaving it behind.

More like this
These 'Bachelor' Spoilers Suggest Christina Mandrell Is The New Villain
By Grace Wehniainen
All The Clues Clint & Gina Aren’t Still Together After 'MAFS' Season 16
By Brad Witter
Kaitlyn Bristowe Said Chris Harrison Ignored Her After Her 'Bachelorette' Hosting Gig
By Grace Wehniainen
'Bachelor' Fans Think Rachel & Clayton Are Dating After This TikTok
By Grace Wehniainen
Get Even More From Bustle — Sign Up For The Newsletter
From hair trends to relationship advice, our daily newsletter has everything you need to sound like a person who’s on TikTok, even if you aren’t.