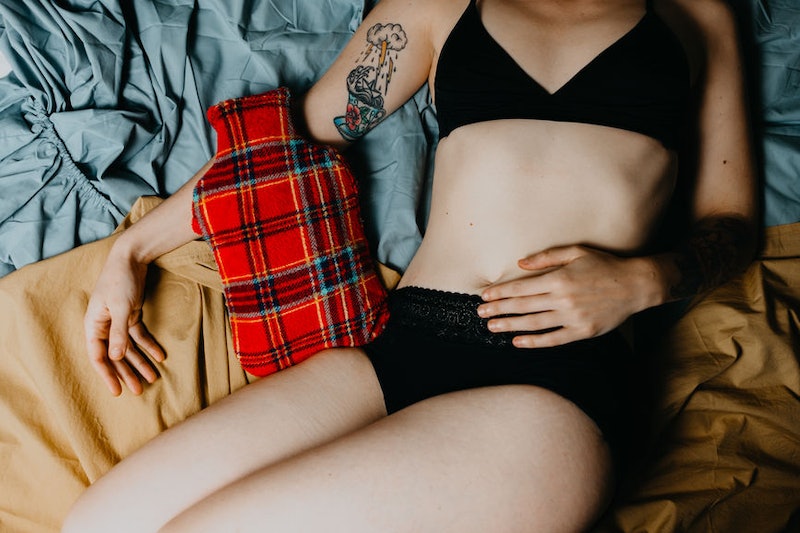 If there's one thing I look forward to least each month, it's the symptoms that come hand in hand with my period. From cramps to migraines, there's a lot to be dealing with. Thankfully, there is the option of purchasing over-the-counter period pain medication, which may make your monthly just that little more bearable. And, as fate would have it, I'm literally writing this with a hot water bottle pressed to my abdomen after a trip to the pharmacy to combat my own symptoms. So let's do this.

The thing about periods — and pain in general — is that it's totally individual. So when it comes to medication that can alleviate cramps (and everything else the menstrual cycle can bring), what works for you may not work for someone else. Luckily, there are a variety of over-the-counter medications available that cater to a wide range of symptoms, and they're readily available in your local pharmacy.

If your period pain is uncomfortable but bearable (you know what I'm talking about), the NHS recommends ibuprofen or aspirin, as they are two non-steroidal anti-inflammatory drugs (NSAIDs) that are commonly used to relieve pain. "You could also try paracetamol," the NHS writes, "but studies have shown that it doesn't reduce pain as effectively as ibuprofen or aspirin."

You may have noticed that there are a few brands that claim to have a version of their painkillers that specifically target period pain, but it seems as though they're actually not all that specialised. Speaking about Nurofen's Express Period Pain medication, for example, the Telegraph wrote "Nurofen’s different targeted pain products, such as pills to combat back pain or tension headaches, are actually all the same. A court in Australia has found that apart from the packaging, they’re all identical." The newspaper continued: "The only thing that separates them from normal ibuprofen is that they have some additional products that speed up the process of ibuprofen getting into the blood stream. But they cannot target pain in specific area of the body."

However, there are some medications that can be specifically prescribed for period pain if normal painkillers have no effect. "The one you want is mefenamic acid, which most women know as Ponstan," Dr Justine Setchell of King Edward VII Hospital told the Telegraph. "That works particularly on muscles in the uterus to loosen them and relieve pain."

Obviously, medication isn't the only thing you can do to calm your menstrual muscles down. A hot water bottle has always been my go to, but a warm bath can also provide the same relaxing effect, as can a light massage to your lower abdomen, the NHS suggests. There are also particular steps you can take if your menstrual cramps are causing pain in your back or your thighs.

You should speak with GP if you feel that over-the-counter medications and at-home remedies are not treating your period pain effectively. That way, they can work out if there are any underlying conditions causing you discomfort. According to the NHS, conditions such as endometriosis, fibroids, pelvic inflammatory disease, and adenomyosis can all make your period pain significantly worse than it should be (doctors refer to this as "secondary dysmenorrhoea"). So, if your pain is abnormally intense, an appointment with your GP is a must.