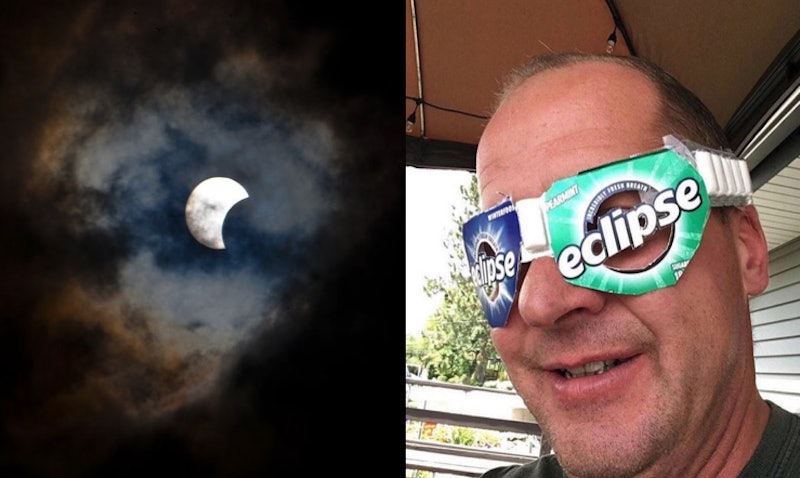 The total solar eclipse is finally upon us, and it's safe to say Twitter and the collective internet is losing its mind. I mean, fair — this eclipse is a pretty special one, after all. It's the first time in almost 100 years that the path of totality crosses the entire country, making this eclipse one of the most visible to Americans, pretty much ever. But even before the moon's shadow had an opportunity to fully pass over the sun, Twitter was bringing the best solar eclipse memes it had to offer to the table for us all to enjoy in commemoration of the big celestial event. They're not quite as awe-inspiring as, you know, seeing the sun's fiery atmosphere form a ring around the moon's shadow, but they're still pretty freaking good.

The eclipse started its southeastern descent throughout the U.S. at around 10 a.m. PST, luring thousands of people outdoors to watch one of nature's most spectacular phenomena unfold before their special solar eclipse glasses-protected eyes. Some found themselves humbled by the mysteries of the universe, others found themselves wondering if 2017 could possibly get any weirder. Either way, the internet had something to say about it.

The next total solar eclipse widely visible in the United States isn't happening until 2024, so in the meantime, enjoy these memes from the 2017 eclipse to hold you over.

The Eclipse Is Actually The Sun Being Photobombed

TBH, I can see how this might be true.

Here's Why You Shouldn't Look At The Sun

Remember when we all thought peas and guac were the weirdest thing that would happen to us?

Make sure your glasses are legit, folks.

Some People Are Getting Creative

Important PSA: these "eclipse" glasses will not protect your eyes from the sun. Like at all.

The anticipation is seriously killing me.

Emoji Use On Fleek

Do people even say on fleek anymore?

Shut Up About The Sun

But like, what else is there to talk about?

No but seriously — use glasses.

I Repeat NO PEEKING

It just isn't worth scorching your retinas for life.

You Can Never Be Too Safe

The eclipse is creepy but also I'm obsessed with it.

On the other hand, this could be the end of the world as we know it.

In Case You Want To Get Literal

It's not quite the same thing.

Star Wars Jokes Are Only Too Easy

And yet, they're still so good.

It's super extra, and it won't protect you.

TL;DR: The eclipse is cool, but these memes are lit.

More like this
Side Character Energy Has Arrived — Here’s What That Means
By Sophie McEvoy
This Viral TikTok Trend is Exposing Everyday Scams
By Sophia Moore
American Girl Doll Memes Are Going Viral On Instagram & Tiktok
By Emma Carey
What Is A “Softboy?” The TikTok Term & Aesthetic, Explained
By Courtney Young
Get Even More From Bustle — Sign Up For The Newsletter