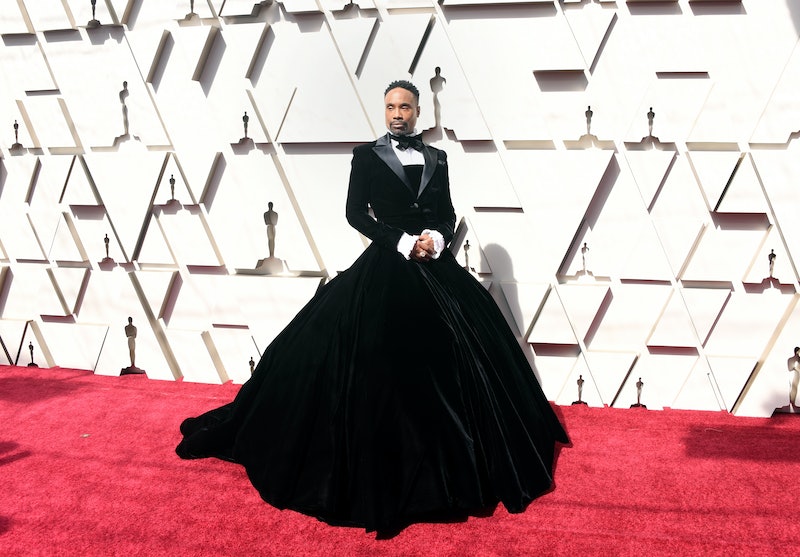 If there could only be one show-stopping fashion moment at the 2019 Oscars, it would be Pose star Billy Porter's velvet tuxedo gown. The Christian Siriano look was completely antithetical to what a Oscars red carpet suit usually is — standard and lackluster. Porter, however, proved that a tux can be a serious style statement. And he wasn't alone during film's biggest night.

Film stars turned out to the Oscars proving suits can slay. In fact, some of your favorite looks of the night just might be tuxes. Notably, women came to serve looks in suits this Oscars season, proving "masculine" fashion is for all.

There was a lot of suit style to take in on the Oscars red carpet. Take a look at the stars of the evening rocking tuxes in the most unconventional ways. You'll be convinced to add a suit and tie to your wardrobe stat.

Actor Billy Porter rolled up to the red carpet incredibly early — and it's a shock every star to follow didn't just stay home. His black velvet tuxedo gown dropped jaws and basically broke the internet. One look and there's no wonder why. Bravo, Billy.

With all-black and a flared pant, comedian Amy Poehler's suit was a monochromatic dream. If you don't stan a woman in a ruffled black power suit, I seriously question your style judgement.

Costume designer Sandy Powell may not be a household name, but her Oscars style will make her a pin on your mood board. Powell rolled up to the red carpet in a striped suit with a black ascot and black beret tipped perfectly on her head.

Awkwafina looked lovely in lavender on the red carpet, adding a bit of shimmer to a standard tux silhouette. With a silk ascot and a matching clutch, her look was all about coordinated style. Plus, anyone who can rock front pleats is a fashionista in my book.

Songwriter Diane Warren served up some serious bling for the Oscars. Her suit was accented with silver trim, while a huge silver chain necklace hung from her neck. This glitzy look was all in the stunning details.

Eighth Grade star Elsie Fisher took to the red carpet in a tux with a cropped pant and subtle piping. Her patent shoes were a vocal point of the look, as was her unique bag. The look was bold — and unexpected — for the 15-year-old breakout actor.

Though actor Allison Janney's tux didn't include pants, it did include a boss jacket and giant cummberbund. And, to be honest, that is all you need for a fierce suit in my book.

Though singer and actor Jennifer Hudson wore a red gown on the red carpet, she changed into a suit to belt on the Oscars' stage. With a cropped pant and giant train, this suit is totally one to envy.

Suited style was certainly a go-to look for the night. And with so many variations on the trend, it's easy to see why women — and Billy Porter — are slaying the trend.