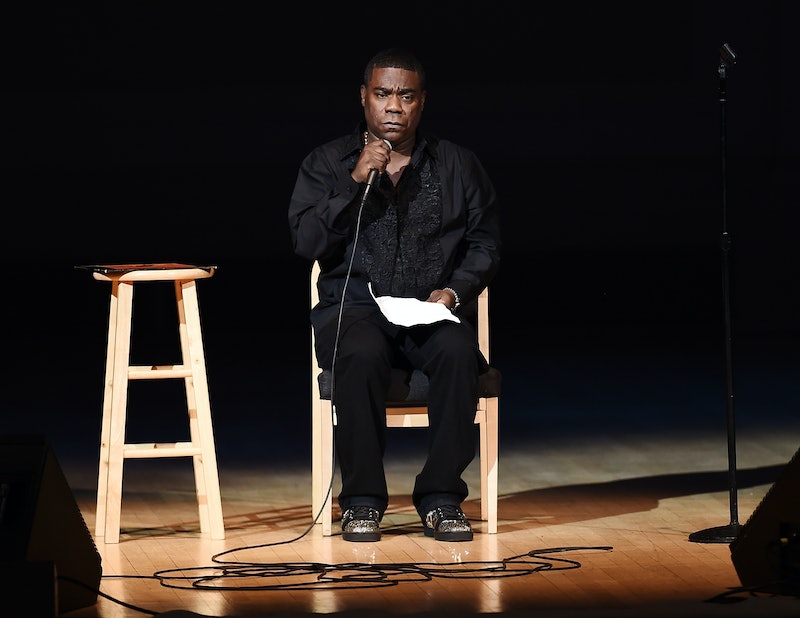 Beyoncé is currently pregnant with twins and the world is awaiting these already-famous babies' entrance into the world with baited breath. In the meantime, Saturday Night Live decided to imagine what Bey's twins might be like in the womb on the Feb. 11 episode. The Beyoncé twins sketch on SNL took a look into the Queen B's womb — and found twins played by SNL cast member Kenan Thompson and SNL alum Tracy Morgan in a hilarious cameo. Episode host Alec Baldwin played the role of Bey's OB/GYN, who was getting ready to do an ultrasound on Beyoncé (played by Sasheer Zamata).

And that's when SNL showed the audience that Bey's womb is a comfy red room with a red couch where unnamed twins played by Thompson and Morgan are lounging around, connected to their famous mom with umbilical chords. "I just feel like we're different than other babies," Tracy's baby declares in the sketch. Kenan's baby sets the record straight for him: "Our mama is Beyoncé, man. Wow, I haven't even breathed yet, and I know who Beyoncé is." Kenan's baby mentions that he feels like he'll take after dad Jay-Z, while Tracy's baby says he feels like he'll take after Queen B herself.

Outside of the womb, Baldwin's OBGYN makes a diagnosis of his own: "It may be too early to say, but I think these babies came to slay." And during the ultrasound, he notices that the picture has gone dark, because even in the womb, the babies were throwing some shade. But when Bey sang a song for the babies — as well as the remix — Thompson and Tracy were loving it as the twins.

While Bey's twins haven't been born yet, SNL just gave fans a preview of what greatness these babies could bring to this world.