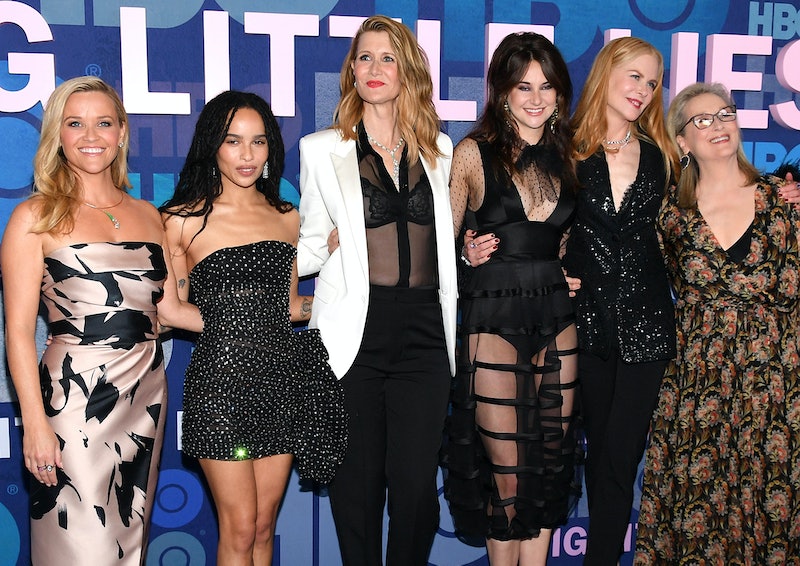 Meryl Streep is bringing trouble to Monterey as Mary Louise, but off screen, the actor is still beloved. On Saturday, the Big Little Lies cast shared birthday messages for Meryl Streep on social media, and the posts show just how close these costars are. The acclaimed actor, who turned 70, received an outpouring of love from friends and fans online. The messages from her Big Little Lies cast mates were particularly meaningful, showing just how much of an impact she's had on the women during their time working on the show.

Witherspoon kicked off the birthday messages on her Instagram Story, sharing a video from the BLL set last year. The actor posted a video wishing the star a happy birthday with Zoë Kravitz, and wrote, "Throwing it back to last summer when we were shooting with Meryl!" Witherspoon interviewed all the show's stars about their favorite Streep films, and the cast had some great picks. Kidman couldn't decide on just one film, and instead she picked several, including Kramer vs. Kramer, Out of Africa, Sophie's Choice, and Adaptation as her favorites.

A few of the other Big Little Lies costars struggled to pick a top film starring the famed actor as well. Laura Dern chose Silkwood, Postcards From the Edge, Deer Hunter, and Julie & Julia as her all time top Streep movies. Meanwhile, Adam Scott, who plays Ed on the series, chose a definitive favorite in Defending Your Life.

In addition to the sweet Instagram Story, Witherspoon also shared a throwback picture of Meryl Streep on Instagram, writing:

"Happy Birthday, Meryl! Sending so much birthday love to this talented creature! What a privilege and an honor to work with you on @biglittlelies! (Check out my Insta-story if you want to see the cast of BLL share their favorite #merylstreep movies !)"

Meanwhile, Dern also posted a birthday message for Streep on Instagram, sharing how inspirational Streep's work has been in her own life and career. "This girl became my legend. And I do declare today an international holiday. Muse Day! Here here! Then I actually got to not only meet my hero but work with her. I thank the Gods. #merylstreep." The official page for Big Little Lies commented on the post, writing, "happy international #merylstreep appreciation day" with a heart emoji.

In her Story, Witherspoon continued her birthday celebration with a cast photo from the prior summer, writing, "We love you Meryl!!" with a large heart drawn over the top.

In May, Streep discussed her love for Big Little Lies in a panel interview with Vanity Fair, revealing how the series convinced her to make the leap into television. "My agent said, 'Don't you want to read the script?' I said no," she said. "It was the greatest thing on television, it really was. There isn't a woman in this room who wouldn’t sign up."

Even though Streep is the newest member of the Big Little Lies cast, it's clear her presence on set was so special for the other actors. The messages the cast shared on her birthday shows just how much the iconic actor has inspired the women working on Big Little Lies, both on and off set.

More like this
Kanye West Has The Most Kanye Reaction To Kim Kardashian & Pete Davidson's Split
By Jake Viswanath
Nicola Coughlan Just Revived 'Derry Girls' In The Most Unexpected Way
By El Hunt
The 'Big Brother 24' Racism & Bullying Controversy, Explained
By Jake Viswanath
Kourtney Kardashian Shares New Photos From Her & Travis' Courthouse Wedding
By Bustle Editors
Get Even More From Bustle — Sign Up For The Newsletter