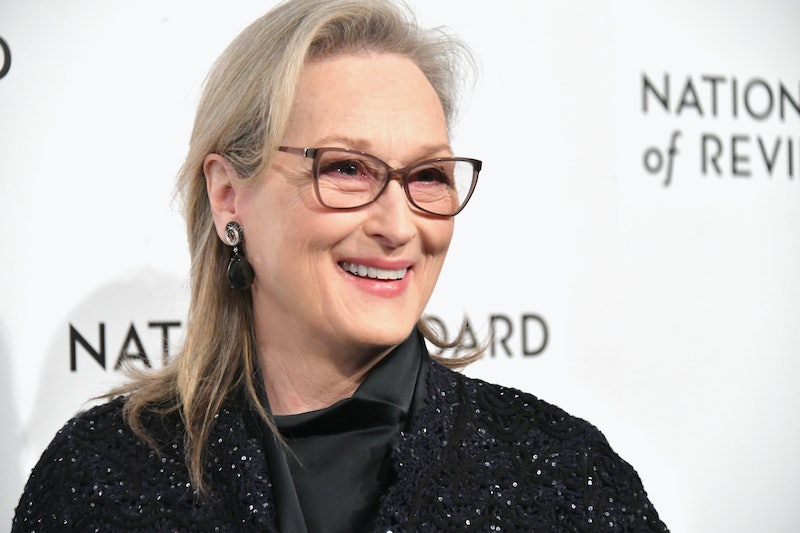 Meryl Streep can handle pretty much any film or TV role with ease. But when it comes to more mundane hobbies, the three-time Oscar winner isn't perfect. No one is! Apparently, Meryl Streep is a terrible bowler, according to her Big Little Lies co-star Reese Witherspoon, who shared this news on The Ellen DeGeneres Show on Monday. And Witherspoon didn't hold back from sharing a funny anecdote about the legendary actor.

After DeGeneres and Witherspoon praised Streep for her ability to take on any role thrown her way — "she just transforms," Witherspoon said — the actor launched into a little good-natured ribbing. "I actually discovered the one thing that Meryl Streep is bad at: bowling," Witherspoon said to DeGeneres. "I honestly think at one point she threw it the opposite way and people, like, scattered. It was really fun, though. She's such a good sport."

As E! News reported, Witherspoon shared a photo from the bowling excursion on her Instagram Story last year. The Legally Blonde actor explained to DeGeneres that she and Nicole Kidman rented a Monterey bowling alley for a night of fun, and Streep and Shailene Woodley joined in on the festivities. It looks like the group had a great time, even if bowling wasn't one of Streep's natural abilities.

DeGeneres, who'd been lucky enough to see a screener of the Season 2 premiere, also said that Streep is "unbelievable" in the show. The three-time Emmy winner is playing Mary Louise Wright, mom to the late Perry Wright, Celeste's abusive husband. Perry died when Bonnie pushed him, after the moms realized Perry had also fathered Jane's son, Ziggy, when he raped her. Based on the Big Little Lies Season 2 trailer, though, the women are all maintaining that Perry's death was a tragic accident.

But while Streep and Kidman's characters don't get along in the show, it sounds like the whole cast has grown super close off camera. And Streep has shared plenty of kind words about her BLL costars. "The fans wanted more, I wanted more," Streep told Vanity Fair in April of joining the HBO show. "I signed on without even knowing what the part was because I had such confidence in this group and just how smart they all are and how high the bar was going to be."

Fans will have to wait until the show returns on June 9 to learn exactly what's in store for the Monterey residents. And while the new season probably won't involve any trips to local bowling alleys, there is one scene that's sure to delight viewers. Madeline throws an ice cream cone at Mary Louise, and while it's not clear why, it's definitely going to be an enjoyable scene to watch.

Anything is possible at this point. Maybe the moms will confess the situation to Mary Louise — she might be more understanding if she knew her son was a rapist and abuser. Then again, she might try to send the ladies to jail for obstructing justice in Perry's murder case. Whatever happens, it's sure to be one heck of a ride.

More like this
Shonda Rhimes' Net Worth Makes Her One Of The Wealthiest People In TV History
By Hugh McIntyre
How Much Are The 'Schitt’s Creek' Stars Worth?
By Hugh McIntyre
‘SNL’ Finally Spoofed Nicole Kidman’s Weirdly Beloved AMC Ad & Nailed It
By Stephanie Topacio Long
Nicola Coughlan Addresses 'Bridgerton' Season 3 Backlash
By Sam Ramsden
Get Even More From Bustle — Sign Up For The Newsletter