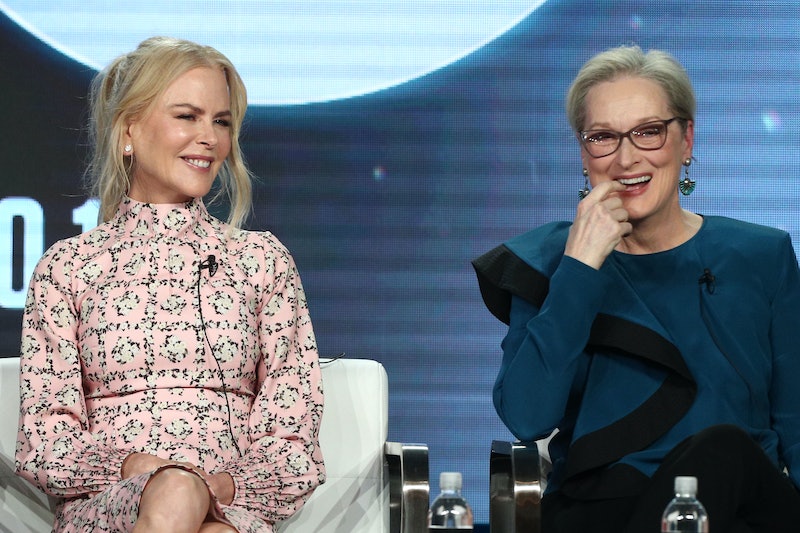 Behind every group of strong female characters is a text chain featuring perhaps the most iconic Oscar winner of all time. In a recent interview with Vanity Fair, Nicole Kidman revealed that Meryl Streep has joined the Big Little Lies group chat while talking about how much the cast's supportive, female-focused nature has meant to her. In fact, the Oscar winner also noted that despite working in Hollywood for almost 30 years, Big Little Lies is the first time that she's become part of such a tight-knight group of women.

"To watch Zoë [Kravitz] and Shailene [Woodley] grow up and to see them become women … it’s so nice, and I’ve never had that," Kidman told the magazine for their May cover story. "I know Laura [Dern] and Reese [Witherspoon] feel that, too. We’re all so different, yet we complement each other." Describing the Monterey Five's intense friendship, Kidman compared their relationship to the cast of Friends. "They spent all that time together — they’re different because there are no men in our equation. I mean, there are, but they’re not on the group chat, let’s put it that way," she said, confirming that the FOMO-inducing group text does, indeed, include new cast member Meryl Streep.

"Yes. And she’s very funny," Kidman said, while Witherspoon confessed that the Big Little Lies are just as thrilled about adding Streep to their squad as anyone else would be. "Can you imagine that we got to go to dinner with Meryl every week? And hear her stories!? ... You can only imagine the conversations that we had."

In addition to helping the cast form a lifelong bond with one another, the process of making Big Little Lies has demonstrated how unique — and important — it is to have so many women working together on set. "Nicole and I talk about this often. I’d been in a show with maybe one other woman, but never five female leads," Witherspoon told Vanity Fair. "I never even had that many conversations on-screen with women who had the same size part as me. It’s pretty amazing to get to work with this group. I feel like it’s a singular experience I’ll never have again."

That singular experience is also what drew Streep to work on Big Little Lies in the first place, as she told VF that she signed on to the show before she even knew who she would play. "The fans wanted more, I wanted more," Streep said of joining the HBO show to play Mary Louise, the mother of the late Perry (Alexander Skarsgard), who arrives in Monterey with questions about her son's sudden death. "I signed on without even knowing what the part was because I had such confidence in this group and just how smart they all are and how high the bar was going to be."

Having so many women in different stages of their career and from so many different walks of life working together has also allowed the cast to support each other as they navigate Hollywood and all of the difficulties that come with being a woman in the entertainment industry. During an April 2018 interview with InStyle, Kravitz opened up about receiving career advice from Kidman and Witherspoon while working on Big Little Lies.

"It’s so amazing to have women in your life like that who are a part of the industry and who you’ve grown up watching and admiring … and now they’re giving you advice and encouraging you to continue and develop your projects, your dreams, and yourself," Kravitz told the magazine.

Witherspoon echoed those sentiments to VF, explaining that the cast had a weekly, girls-only dinner together to share stories and experiences. "It’s like years and years of actresses being siloed off, and finally they let us intermingle," she explained. "It was a really amazing experience of sharing our indignities and our triumphs, and just every rainbow of the female experience in our business."

While the Monterey Five's relationship onscreen is somewhat complicated — though they have proven that they'll come through for each other when the situation gets dire — the experience of working on Big Little Lies has given the cast a way to celebrate strong women on television and in real life.

More like this
Shonda Rhimes' Net Worth Makes Her One Of The Wealthiest People In TV History
By Hugh McIntyre
How Much Are The 'Schitt’s Creek' Stars Worth?
By Hugh McIntyre
‘SNL’ Finally Spoofed Nicole Kidman’s Weirdly Beloved AMC Ad & Nailed It
By Stephanie Topacio Long
Self Esteem's “F*cking Wizardry” Is An Anthem About Knowing Your Worth
By El Hunt
Get Even More From Bustle — Sign Up For The Newsletter