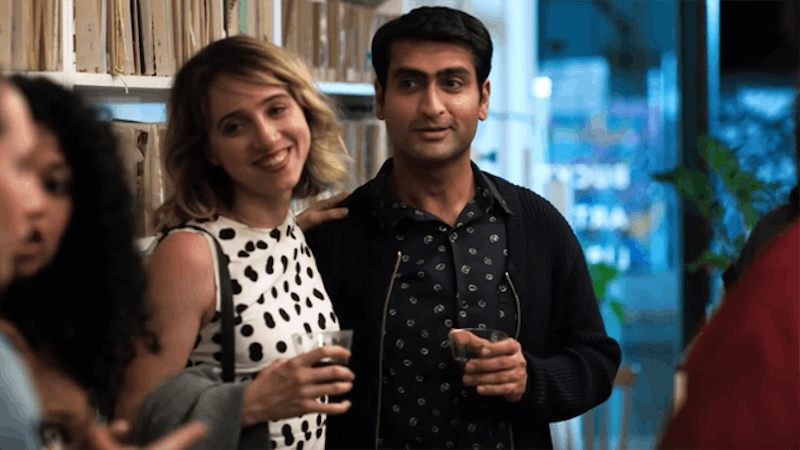 Sharing a project that you've poured your heart and soul into is hard for anyone. It's particularly hard when the project at hand is a full-length film about the time you and your wife fell in love, broke up, and got back together while she was battling a serious illness. Oh, and also, in this example, the full length film is a Judd Apatow-produced comedy. That's what life feels like for actor and screenwriter Kumail Nanjiani, whose film that he co-wrote with his wife Emily V. Gordon (pictured with Nanjiani, below), is finally hitting major theaters June 29 after debuting to serious acclaim at Sundance. Luckily, the actor is already well-versed in dealing with a criticism that plagues many Apatow films, including The Big Sick: it's too damn long.

Nanjiani has a really good reason for that extra runtime: his leading lady needed a story too. "That’s the one thing we get dinged on, it’s like 'it’s too long.' Well, yeah, but the woman’s in a coma — when she wakes up, she can’t just run back into his arms," he reasons when we speak a week ahead of the film's wide release.

As he talks, he takes some his frustration with the critiques out on his hair. "[The character] just almost died, so we have to see her perspective, we have to see her point of view, we have to see her grapple with her own mortality. And to her, she’s awake, the fact that Kumail is hanging out, wanting her to like come back to him, is like so outside her consideration. She’s like, 'Why are you here? F*ck off, I need to figure out my life. I want to do something, I don’t have time for you right now.'"

The writing duo needed to avoid making the movie all about Kumail, with his "girlfriend in a coma" left as nothing more than a set piece. It's an obnoxious movie trope that some people were concerned about The Big Sick rehashing the moment the trailer dropped.

"I saw that, where someone was like, of course Judd Apatow’s rom-com has the woman in a coma literally the entire movie, that’s what they said. First of all, so many things are wrong with that. It’s not literally the entire movie. You haven’t seen the movie, clearly," says Najiani. He's speaking nonchalantly, clearly having made peace with this common misunderstanding in the months since the trailer debuted. "We really went out of our way. We understood that that was going to be a challenge, that the female lead of the movie is in a coma." (Of course, it helps that the real life inspiration for that woman is Nanjiani's partner in life and in screenwriting.)

Unfortunately for Nanjiani and Gordon, the length is not the only part of the film they've received flack for. The fact that these two people are in love, has, for some people, made the film "political." It's something Nanjiani appears more frustrated by than movie critics' quips about runtime — and understandably so.

"I’ll see people retweeting the trailer being like, ‘Look at this liberal propaganda.’ I’m like, ‘How was it propaganda?’ Because it’s a brown man and a white woman falling in love, that’s propaganda? That says more about you," he offers, leaving a pause to hang in the air for a moment.

Of course, that's not the only reason some people see the film as political. While the film's Twitter-length synopsis may only have room for the fact that The Big Sick is a love story about a man trying to win back his girlfriend who ends up in a coma, the film is largely about the inner workings of each character's family. Kumail finds himself at odds with his parents when he falls in love with Emily because they expect him, as a Pakistani immigrant, to uphold the tradition of arranged marriage. Not doing so causes a major rift in the family and jumpstarts the romantic separation between Emily and Kumail that drives the entire film. It may be why some people are — for better and, in many cases, for worse — politicizing the film.

How was it propaganda? Because it’s a brown man and a white woman falling in love, that’s propaganda?

Najiani says he understands why it happens when I ask him about the reactions on other side of the spectrum (namely the praise for the fact that seeing a Pakistani immigrant as a romantic lead is "a rare delight").

"I try to be zen about it. I’ve seen those things, but it doesn’t really affect me directly. I don’t really go like, 'Oh wow that’s great, there’s like a brown guy who’s like the lead of a rom-com.' I don’t think of it like that, I still think of it as just like, I feel very lucky that we got to tell our story," he says.

At the end of the day, that's what matters to Nanjiani most — that The Big Sick is his and Gordon's story. Critics, audiences, and random dudes on Twitter will all have their say about this "else world" version of their life together — that's what happens when you tell a story to millions of people. But that won't shake Nanjiani, who says while it's weird that sharing the story means "everybody kind of gets to own it a little bit," he and Gordon changed enough of it to make sure a part of it "is still just ours."

His biggest hope is that rather than focusing on the runtime or whatever political agenda audiences may think the story is weaving, that people walk away feeling hopeful.

That, right there, just might be worth sitting in a movie theater for 20 minutes longer than you planned. Just saying.