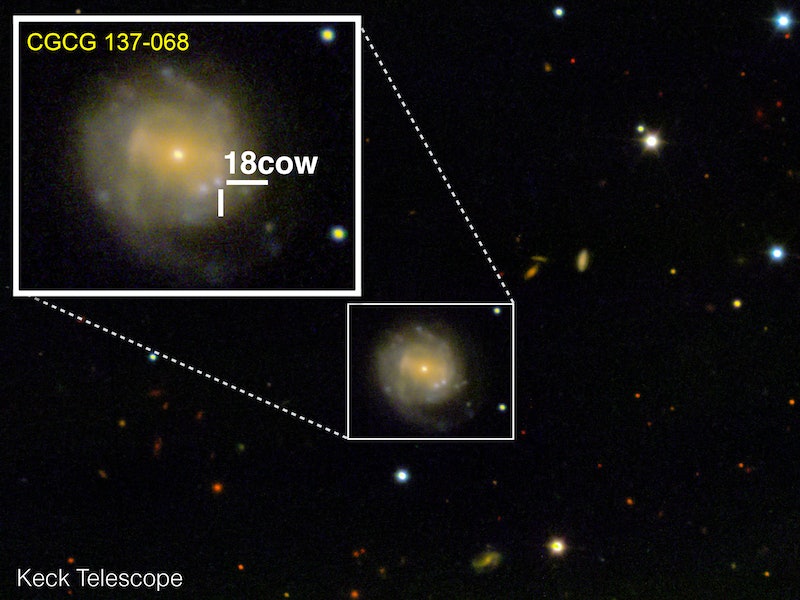 Scientists have known for a pretty long time that black holes exist, but they’ve never actually seen one as it was being created. But some NASA-funded scientists might have caught the birth of a black hole on camera for the first time ever, The Independent reports, and they are totally geeking out. The scientists originally thought a bright glow in deep space that flared up and quickly disappeared in June of 2018 was a bright star or a supernova, which is a super bright star-burst, according to The Independent. But after studying the light anomaly using several data sources, says The Independent, the scientists now believe they’ve witnessed the formation of a black hole or a neutron star.

A black hole is a spot where gravity pulls so hard that even light can't get out of it, according to NASA. Black holes are actually invisible, says NASA, so you need a special telescope to see them. A neutron star is when the core of a massive star has a gravitational collapse, where its protons and electrons get all crammed together, says NASA.

"We thought [the light anomaly] must be a supernova," Raffaella Margutti, assistant professor of physics and astronomy at Northwestern University and lead researcher, told The Independent. "But what we observed challenged our current notions of stellar death." Nicknamed “The Cow,” the light anomaly was around 100-times brighter than a typical supernova and flared up and disappeared more quickly, The Independent reports. As in, the light anomaly used up most of its juice within the first 16 days versus other stellar objects that can keep going for millions or billions of years, according to the news release. This atypical behavior is what prompted the scientists to investigate further.

"We knew right away that this source went from inactive to peak luminosity within just a few days," Margutti told The Independent. "That was enough to get everybody excited because it was so unusual, and, by astronomical standards, it was very close by." Close by as in two hundred million light years, which Margutti says is the closest transient object of its kind that researchers have ever found, according to the news release.

According to Margutti, black holes and neutron stars form when a star dies, but scientists have never seen either object right when they’ve been born, according to Space.com. The researchers observed the light anomaly for several months using telescopes set at various wavelengths, says Space.com, and they also studied The Cow’s shape and chemical makeup. After combining all of these imaging sources, the researchers believe their telescopes captured the exact moment a star collapsed to form a black hole or a neutron star, according to the news release.

"It took a while for us to realize what we were looking at — I would say months," Brian Metzger, associate professor of physics at Columbia University in New York and co-author of the study, told Space.com. "We tried several possibilities and were forced to go back to the drawing board multiple times. We were finally able to interpret the results, thanks to the hard work of our incredibly dedicated team."

The researchers’ findings are pretty significant because they’ll help astronomers better understand the early moments of the birth of a black hole or neutron star. There’s now a little less mystery behind the physics of how these stellar objects come to life — and what happens in the moments after. Perhaps these invisible space objects have just become a little more visible.