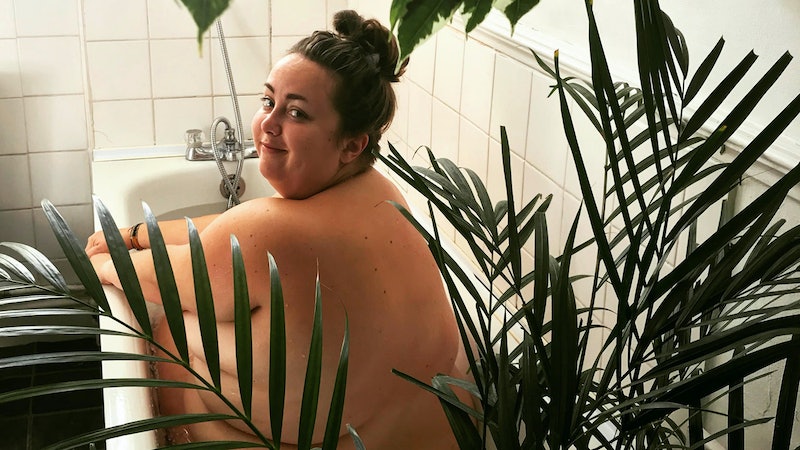 I am fat, I always have been and I’m pretty sure always will be, but I don't subscribe to the ‘body positive movement’. As someone who is talking about and making work about fatness, the phrase "body positive" seems to creep in, uninvited, to conversations, tweets, and texts about me — despite me never using those words myself. It’s a catchphrase you can’t escape at the moment, appearing in hashtags, in adverts, and on over-priced stationary everywhere. But rather than it being synonymous with bodies like mine, it's instead associated with straight-sized white women congratulating themselves on being conventionally attractive.

But this isn’t how body positivity started. It began as a movement to create a space where bodies rejected by society could exist. A place where bodies that didn’t fit the conventional mould could come together to celebrate, learn from, and support each other — essentially to create a subculture separate from the one we’d been rejected from. It began as the fat acceptance movement in 1960s, which aimed to tackle anti-fat bias in society by raising awareness of discrimination directed towards overweight and obese people. This was reborn in the late 2000s when bloggers, activists and influencers began to use the internet as a forum to discuss being marginalised.

However, more recently the movement has been co-opted by almost everyone but the people it was initially created to represent. Capitalism is sinking its sharp teeth into fat acceptance and regurgitating it as something more palatable — body positivity. This allows the movement to be commodified and monetised, with fitness bloggers using "strong not skinny" captions to sell protein powder or brands, whose size range still doesn’t extend beyond a size 18, to get a PR boost for including a model above a size 10 in a campaign.

Don’t get me wrong, every person is entitled to love their body, to feel comfortable and confident, and to be able to navigate the world without prejudice. But the difference is that living in a fat body is a political act and loving that fat body, in spite of society, becomes something radical. Regardless of whether or not if you “feel” fat or thin, if you are perceived by society as being thin, then you have thin privilege — something that is so often overlooked by people who claim to be intersectional.

If you can eat on public transport without being stared at, sit on any chair without having to assess whether or not you’ll fit in it, or walk in to any clothes shop and buy items of clothing, then you have thin privilege. It also means you can exist loudly and proudly, without being told you’re "glorifying obesity" and can seek medical advice without being told to lose weight. This doesn’t, however, mean your life is easy or that no one has ever commented on your appearance, nor does it negate any person’s individual suffering related to their body — but it does mean you have an element of privilege, which is important to acknowledge.

I began taking up space more publicly as a fat person in early 2018. I had always been fat but only then did I start to actually acknowledge it out loud. During the few years before that, I used to recount anecdotes from my life and when told what I thought was punchline, I realised no one found it funny. Things I thought were a normal part of growing up, I became to understand I was uniquely subject to because of being fat. And although it was at times painful, starting to talk out about my experiences as a fat person was very liberating. It was these conversations, combined with tapping into the fat community online really changed my outlook on my body, and in turn enabled me to create a show talking about my, and other people’s, relationship to my body.

This is why the erasure of people that are actually fat, in favour of people that are the right kind of fat is so frustrating. Worshipping thin (now with added boobs and bum) white women for not sucking in their stomach in an Instagram post isn’t something I am remotely interested in. Nor am I interested in brands that feel the need to celebrate their plus-size strands on a separate feed, as fashion label OhPolly recently did.

If you want to align yourself with the body positivity movement, then that's your choice. It's your body and totally up to you how you want to define it. But I will continue my fat acceptance journey surrounded by glorious fat bodies, complete with curves, rolls, and folds instead of a hashtag that is trying to sell me a repackaged version of the fatphobia I'm trying to escape.

Katie will be playing at the UK's largest spoken word festival, The Last Word which takes place at Camden Roundhouse on 2nd - 22nd June (Fatty Fat Fat is on at 7.15 p.m. 9 June).

More like this
Pret & Costa’s Coffee Is The Strongest On The High Street, According To Which?
By Sam Ramsden
Here’s What TikTok's "Mascara” Trend Is *Really* About
By El Hunt
Gen Z Are Twice As Likely To Identify As Queer, According To New Data
By Sam Ramsden
Ben & Jerry’s New Sundae Flavours Are A Chocoholic’s Dream
By Sophie McEvoy
Get The Very Best Of Bustle/UK
Sign up for Bustle UK's twice-weekly newsletter, featuring the latest must-watch TV, moving personal stories, and expert advice on the hottest viral buys.