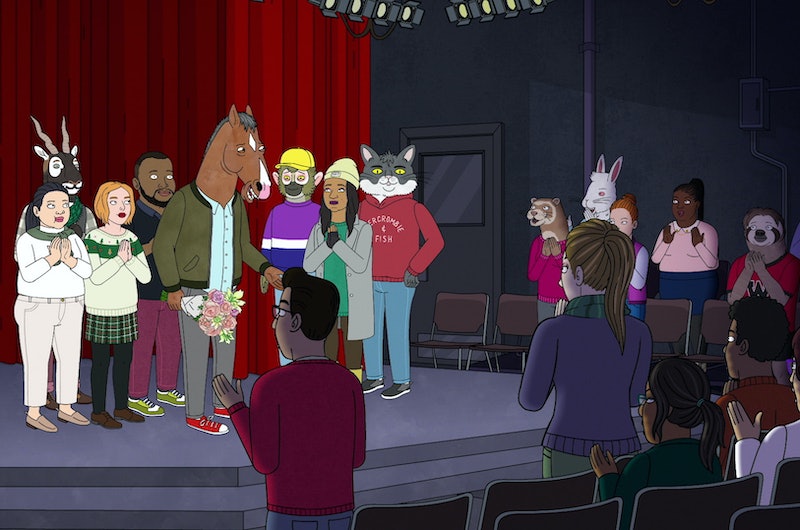 Friday, Jan. 31 marks the end of BoJack Horseman, and with it the end of an era. Raphael Bob-Waksberg's anthropomorphic world of depressed animals brought audiences stellar voice performances from comedians like Will Arnett (as the titular horse man), Amy Sedaris (Princess Carolyn), Kristen Schaal (Sarah Lynn), and Paul F. Tompkins (Mr. Peanutbutter). But each season (or half-season, as it were) also boasts an embarrassment of celebrity cameos, and the BoJack Season 6 Part 2 voice cast is no exception.

In addition to these comic voice actors, the Netflix show's season-to-season cast has also included talent such as Allison Brie (Diane) and Aaron Paul (Todd), who both return a final time in the latter half of Season 6. Aparna Nancherla also reprises her character of Hollyhock — BoJack's anxious half-sister. Audiences may also recognize J.K. Simmons as the cut-throat Hollywoo executive Lenny Turtletaub and Patton Oswalt as the perpetually nervous, financially unstable book publisher Pinky Penguin.

And while in the past, big names like Jessica Biel, Cindy Crawford, and Whoopi Goldberg have voiced characters, there are some brand new cast members this time around. Here's who audiences can expect to hear in Season 6, Part 2 of the animated Netflix series.