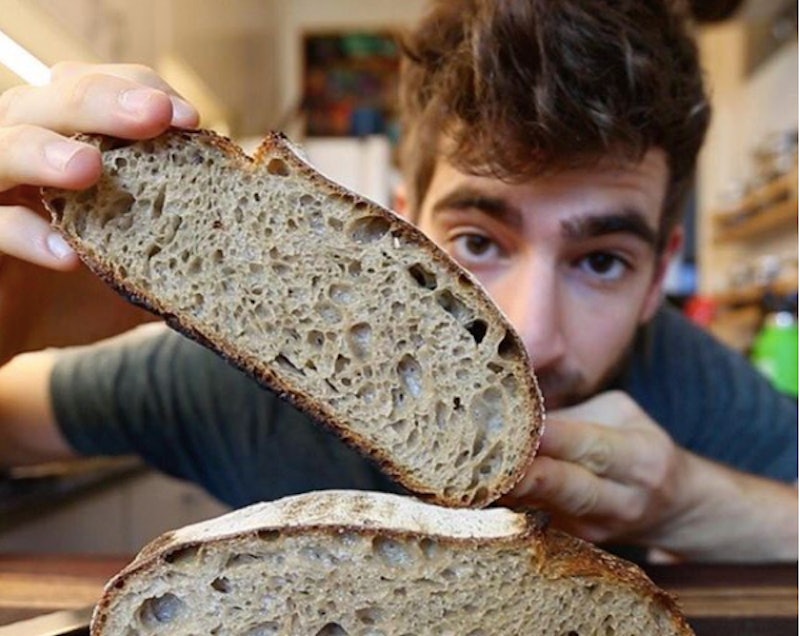 For anyone out there who loves boys and carbs, you're in luck.

If you've ever started cutting a nice, freshly baked (or bought) loaf of bread, paused, and been like, "You know. I wouldn't mind sharing this with somebody," there is now an entire Instagram of men who would be willing to help you out. Specifically, the Instagram account Boys With Bread, filled with — you guessed it — pictures of boys with bread.

You may have seen the famous Facebook page, "Handsome black man drinking coffee or tea with strong eye contact," or the "Men with Cats" photo series, or the Instagram page (now turned book!) "Hot Dudes Reading" — this is decidedly in that same genre, except with a whole lot more carbs to go around. The bio to this latest iteration of Boys Doing Things says "Just lookin’ for Mr. Rye," and "I like big buns and I cannot lie." If this sounds like you, you're in for a treat.

The idea blossomed into fruition this December, when Melanie Albert, a 29-year old woman living in Denver, Colorado, became curious about starting a community on Instagram.

"I started thinking about what types of pages I'd be interesting in following," she writes to Bustle in an email. "When I came up with this idea, I have to admit, it made me laugh out loud. It seemed very out there, plus it's fun to say!"

Because what better way to unite people than bread?

I mean, this guy seems to be having the time of his life.

Albert writes she eventually found there was a very big baking community on the Internet and the account has "taken on a life of its own."

Can you blame it? I mean, we have to talk about some of these.

I want to be the bread ball of his eye!

I think this beats the classic "man with fish" image, doesn't it?

This is beauty and grace.

Albert initially wasn't sure how to start a following, and began searching through hashtag to find these mysterious men with mounds (of bread). Then, she writes, she encountered all sorts of quirky hashtags and started following bakers, liking pictures, and trying to start conversations with the 'grammers.

If you're a brave boy who wants to be featured on the account, tag Boys With Bread or DM Melanie! She's pretty responsive about letting you and your dough have your moments.

"I always try to remember to thank the person whose picture I am sharing through direct messages. The page is fun, but can also can be a platform for people. I hope they know it's a two-way street!" she writes.

I don't know about you, but I'm grateful Albert was creative enough to do the community such a huge service like this.

Honestly, scrolling through the lot of these, I'm not sure if I'm more jealous of the bread or the chiseled man who gets to hold the dough ...

As for Albert, the next thing on the list of bread domination? Going bigger with the male cameos.

"I've had a few chefs/bakers who have thousands of followers who have agreed to be featured," she writes. "My ultimate goal is to catch Paul Hollywood's attention. I was in the midst of a Great British Bake Off binge on Netflix when I first launched this page. Paul — if you're reading this — you're my inspo!"

Hear that, Paul Hollywood, celebrity chef extraordinaire? Albert's got a blank space on her Instagram with your name on it. In the meantime, you can follow Albert and her adventures with boys and bread on Instagram here.