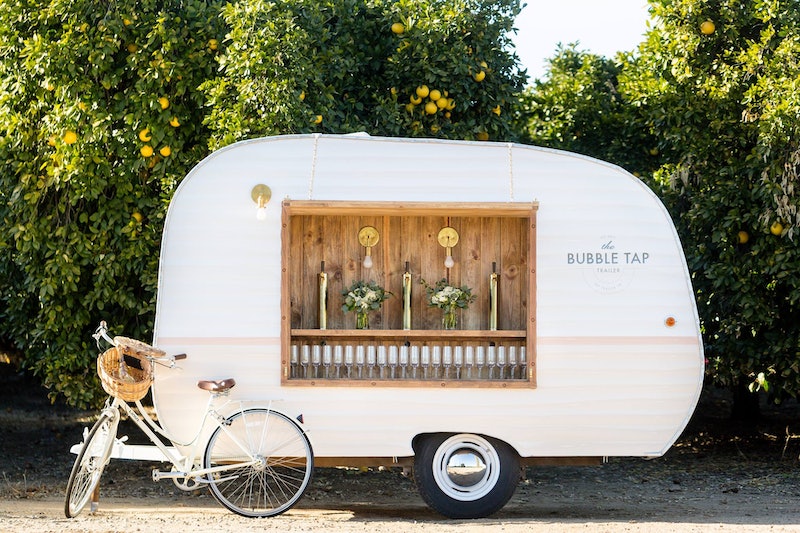 And today in Things You Had No Idea Every Wedding You've Ever Been To Were Missing, we have this: The Bubble Tap Trailer. It is exactly what it sounds like: A vintage trailer serving up prosecco on tap. You can rent it out for events like weddings, benefits, and parties, and, uh, folks? Well, let’s just say that I haven’t previously had any regrets about my own wedding… but I do now. I mean, sure, the Bubble Tap Trailer didn’t even exist yet when I got married, but wow, do I wish it had, and wow, do I wish I had been able to book it. Anyone got a DeLorean handy? Or maybe a TARDIS? No? Sigh. I guess I'll just have to live with my regret.

Although the Bubble Tap Trailer is currently in the news due to former NYSYNC-er Lance Bass being a partner in the business, I’ll admit that I’m less interested in it for that reason than I am for the simple fact that it’s, y’know, a trailer full of sparkling wine. Let’s face it: A Pinterest-perfect trailer that brings prosecco and sparkling wine wherever it goes is spectacular enough of an idea to sell itself — no star power needed. (I will, however, concede that the on-boarding of Lance Bass does make it extra… uh… extra.) Currently the main service available from Tap Trailer Co., an up-and-coming company based in Southern California, the Bubble Tap Trailer aims to “make serving bubbly easier, more eco-friendly (fewer bottles to recycle) and, of course, more Instagrammable,” as Town and Country put it last September. I think it’s safe to say the vehicle is achieving that goal and then some.

Tap Trailer Co. formed in December of 2017, the brainchild of Jennifer and Nicole Disotell, a sibling team who each have well over a decade of experience in digital marketing, social media, and brand growth. However, that was just the beginning of the journey; it would be several months before they were ready to roll, both literally and figuratively.

At the end of December 2017, Tap Trailer Co. posted some “before” pictures to Instagram of the trailer they planned to convert into the Bubble Tap Trailer — and it wasn’t pretty. As the sisters put it, the trailer was “in need of some major TLC.” A “canned ham” trailer — the teardrop-shaped style of camper meant for one to two people that first arrived in the United States in the 1930s and achieved widespread popularity in the '50ss — the future Bubble Tap vehicle was battered and weather-beaten on the outside and literally falling apart on the inside.

But by February of 2018, the restoration of the 13-foot-long, nine-foot-high, seven-foot-deep vehicle was nearly complete, and by March, the Bubble Tap Trailer had begun making appearances at events throughout Southern California. The Disotells took part in March’s For Love And Ladies event on International Women’s Day:

The trailer has been hired for wedding welcome parties:

And sometimes, they open up shop for a few hours around LA — like an ice cream truck, but better:

So: What do you have to do to book the Bubble Tap Trailer yourself? First off, you have to be in Southern California, ideally in or around LA. According to Town and Country, the trailer is currently limited to that area, with a $2 per-mile charge applying for events that are 10 miles or more outside of Santa Monica. (For what it’s worth, though, the “Franchise” page on the Bubble Tap Trailer website notes that franchise will be opening in Austin, Denver, Palm Beach, and New York soon.)

And second, you have to do some advanced planning: According to the Bubble Tap Trailer’s FAQ, California state law requires all events to have an alcohol catering permit, the applications for which need to submitted at least three weeks in advance of the event. (The permit is only $25 and the Bubble Tap Trailer team will work on getting it squared away for you, but you do need to allow the proper amount of time to get it done.) Also, as you might expect, some seasons are busier than others, so… book sooner, rather than later, and be prepared for the trailer’s availability to be pretty full up.

There’s a flat rental fee for the trailer itself, which includes three hours of service; you can also shell out more for additional hours if you expect your event to go on for longer than that. Additionally, you’ll need to buy the actual prosecco kegs, which you’re required to do through one of Tap Trailer Co.’s approved vendors. There’s a two-keg minimum, but Tap Trailer Co. will “will coordinate the purchasing of any alcohol on your behalf,” per their FAQ, so the process should be nice and easy. You’ll also be able to schedule a tasting once you’ve signed your contract, so you can make sure the bubbly that will be served at your event is exactly to your taste. For the curious, each keg holds 26 bottles of sparkling wine, which yields about 130 glasses. You can make inquiries about booking the trailer here.