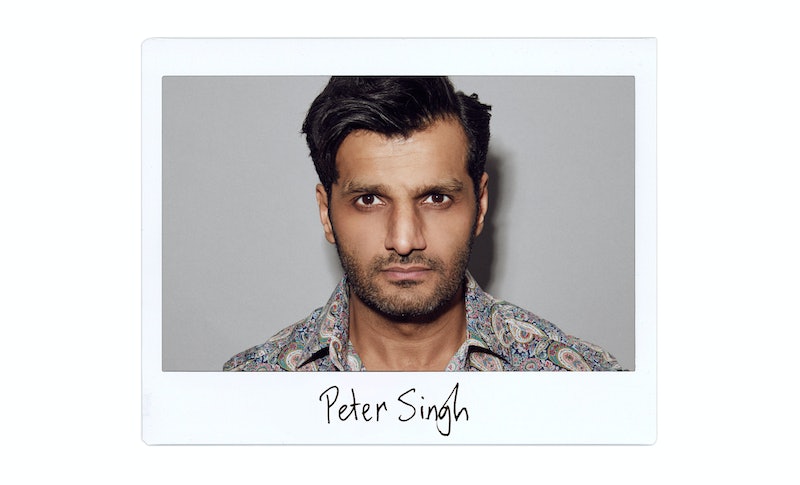 When celebrities hang out with Bustle editors, we want to give them the chance to leave their mark. Literally. So we hand them a pen, a piece of paper, a few questions, and ask them to get creative. This time, British acting talent Peter Singh is leaving his mark in the Bustle Booth.

If you think you recognise Peter Singh, that's because you probably do. The actor has starred on stage, the small screen, and the big screen in a smorgasbord of genres from soaps and light-hearted comedies to hard-hitting true stories. And he's just starred in one of the nation's most talked-about series since Bodyguard wrapped last year: The Capture.

Playing MI5 counter-intelligence officer Phillips in a story about CCTV surveillance and how it can be manipulated, Singh says the series tapped into "a very real fear." He tells Bustle: "It’s pretty scary when you think about it. The fact that we all seem so comfortable with this level of surveillance in our day-to-day lives. Cameras are everywhere, not just CCTV, but also the cameras and microphones we carry around with us, our internet usage, our buying habits etc. All this is very easy for authorities to monitor. And you hope the people who hold this power are doing it for the right reasons."

Born and bred in Bradford with a childhood that involved "nothing particularly exciting [and] nothing particularly traumatic," as he told Fucking Young magazine, Singh's acting career took a slightly different route than most. He effectively trained on the job, per Entertainment Focus, working with a number of theatre companies before segueing into TV series and even the Alan Partridge film.

Now Singh is everywhere. This year alone, he made a return to BBC Two sitcom Motherland and has worked on two major films: The Flood, which follows an immigration officer (played by Game of Thrones' Lena Headey) as she sets out to the Calais Jungle and Armando Iannucci's comedic take on Charles Dickens' David Copperfield novel.

And Singh's hopes for the future of his career are just as varied as his CV. Not only would he love to play Macbeth or a Ghostbuster, he tells Bustle, but he also yearns to work alongside Al Pacino and Ben Kingsley. Oh, and he's still hoping to shoot scenes with Ron Perlman. The two may have both starred in The Capture, but sadly they had no scenes together.

Learn more about Singh's supernatural obsession and his Wikipedia habits in the Bustle Booth questionnaire.