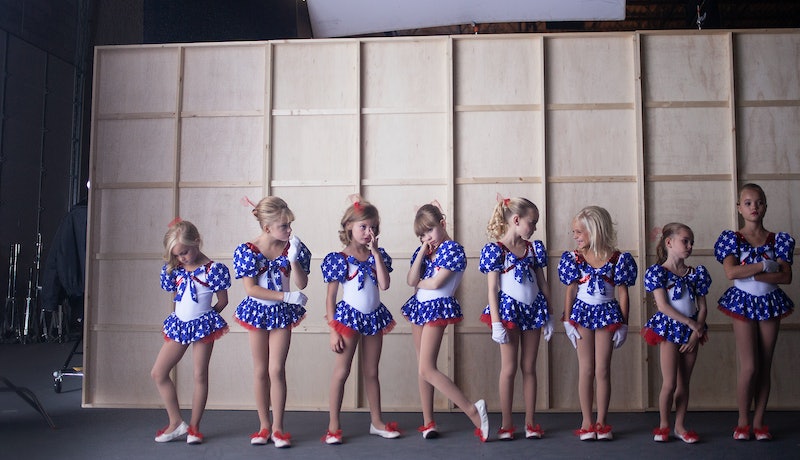 The legacy of the JonBenét Ramsey murder has encouraged endless speculation on the cause of her death. Many television networks have attempted to cash in on the two-decades-old case with true crime specials about JonBenét hoping to finally determine who the killer is. Of course, when traditional television zigs, Netflix zags. The streaming service has just announced that its subversive documentary Casting JonBenét's Netflix premiere date is April 28, 2017. While many television specials seem to still be asking "Who killed JonBenét?", the documentary by Sundance award-winning director Kitty Green will be focusing on the question "What changed after the death of JonBenét Ramsey?"

The short answer to that question: A lot. The Netflix press release for the film says that Green returns to Ramsey's hometown of Boulder, Colorado to collect interpretations from the locals. Along the way, she crafts a vision of a post-JonBenét world that confronts myth, memory, parenthood, pageantry, and the how the late Ramsey became a celebrity in death. According to The Guardian, Green approaches these themes through holding auditions for the role of JonBenét Ramsey herself — and, through that lens, confronts not just the effects of her murder on the world, but how the world and media responded to the case through its many televised crime specials and endless pondering on the case.

Green's stylized approach to the case also involves auditioning other popular personalities in the case, JonBenét's mother, father, brother, and more, according to The Guardian. Green uses these auditions as a way to get locals to put themselves in the shoes of those directly involved in the case and collects the auditioners' interpretations of what really happened. This all casts a light on the mass speculation on the case, but also explores why people continue to be fascinated by the morbid crime.

Netflix and Green's documentary promises to be like nothing that's come before it. It's not just a new approach to a topic that's already been discussed from every angle for 20 years, but it stretches the meaning of documentary in a new and exciting way. See for yourself when Casting JonBenét premieres on April 28, 2017.