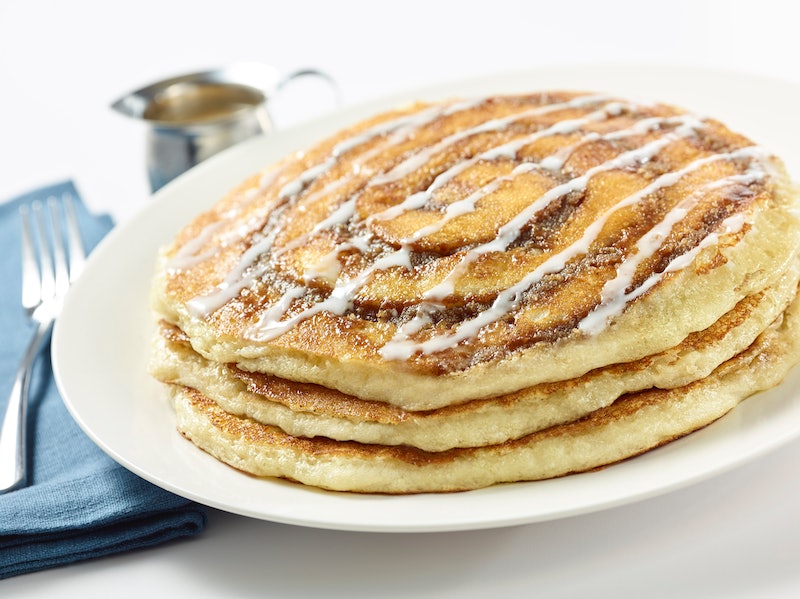 What do you get when you cross two delicious breakfast foods? No need to ponder for too long as The Cheesecake Factory has taken it upon themselves to answer that question for all of us. Yes, The Cheesecake Factory has shared its cinnamon roll pancakes recipe, giving us all the breakfast food hybrid we didn’t know we needed. It’s a pancake! It’s a cinnamon roll! It’s suddenly what all your at-home brunches require.

You likely have most if not all of the ingredients to make this cinnamon-y concoction. The recipe starts off fairly straightforward with your traditional pancake component — flour, sugar, baking powder, eggs. The Cheesecake Factory also includes buttermilk in their batter. (If you can’t find buttermilk at your store, or just don’t want to go out for another trip, you can make an easy buttermilk substitute by mixing 1 tablespoon of lemon juice or white vinegar into a cup of regular milk.) However, the key is in the “cinnamon swirl,” aka the sugary, gooey ribbon that turns these babies from pancakes into a cinnamon roll-pancake delight.

If you’re going for an “all cinnamon roll everything” breakfast, your options will be far from limited. International Delight has Cinnabon coffee creamer that is exactly what it sounds like. The non-dairy creamer features the flavor of cinnamon rolls and cream cheese frosting. So, you can eat your cinnamon roll and drink it, too.

If you’re looking to give into the inevitable and turn your cinnamon roll pancake into a full-on dessert, there’s Cinnabon ice cream to help you in that journey. The cinnamon and vanilla ice cream includes swirls of cinnamon roll flavor, as well as pieces of cinnamon dough bites. It is proof that the dessert gods love us and want us to be happy.

While you're trying out the cinnamon roll pancakes, you should also check out The Cheesecake Factory's recipe for lemon-ricotta pancakes. As their name suggests, they take a typical pancake batter and fold in a mixture of lemon zest and ricotta. If nothing else, they'll be a nice, fruity balance to your stack of cinnamon roll pancakes.

This article was originally published on April 23, 2020