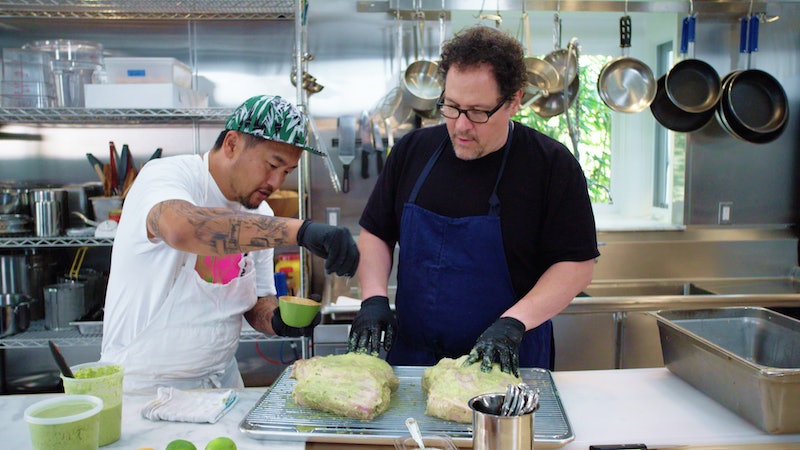 Jon Favreau and Roy Choi are back for another installment of The Chef Show, the Netflix docuseries inspired by the research Favreau did for his film Chef. Infamously, in Season 1, a clip of Gwyneth Paltrow discovering that she was in Spider-Man: Homecoming went viral and became a whole thing — but the second half of the season will probably be a lot less meme-worthy. The Chef Show cast has fewer stars in Volume 2, but serves up plenty of good eats nonetheless.

Since Favreau was working on Avengers: Endgame during Season 1, he pulled from the Marvel pool to cast the first episodes — hence the Paltrow cameo. Another episode featured Robert Downey Jr., Tom Holland, Kevin Feige, and the Russo Brothers sitting down to dinner in Atlanta. But fans of Favreau know that he has a gazillion other projects in motion whose actors could show up as well. However, while the second half of the season does reference Favreau's directorial work on The Lion King and The Mandalorian, it's not chock full of cameos from celebs in those projects.

Here's the cast for Volume 2, including all of the chefs that team up with Favreau and Choi to talk and make delicious dishes. Almost all of them have internet presences, so even if you didn't know the guests prior to The Chef Show, there's plenty of content out there to enjoy.

OK, so there's one major Hollywood cameo in the first episode: Rogen, who played Pumba in Favreau's photo-realistic reboot of The Lion King. Turns out, Rogen is particularly good at preparing chicken.

Episode 2 is all about Uditi, the "pizzaiolo" (he makes pizzas) and chef behind Pizzana, a Naples specific Italian restaurant in Los Angeles. This isn't Uditi's only starry appearance. He was recently Jennifer Garner's first "Pretend Cooking Show" guest on Instagram.

You may know Episode 3's guest Avila as the founder of Guerilla Tacos in LA, a pop up food truck that blew up in popularity. Now, you can even go there for brunch!

Episode 4 doesn't focus on any particular chef or person. Instead, Choi and Favreau visit the incredible team at Hog Island Oyster Co. in Napa, California. They get down and dirty on the sustainable farm.

Episode 5 takes place on Skywalker Ranch, and Favreau enlists his fellow Mandalorian producer Filoni, a writer and animator who created Star Wars Rebels and Star Wars Resistance and also worked on shows like Avatar: The Last Airbender and King of the Hill. It's cool that Favreau is shining a light on the folks behind the scenes as well.

The final episode of Volume 2 has two guests. The first is Rea, a food YouTuber who recreates dishes from film and television on his show Binging With Babish, and also appeared in Volume 1. Choi and Favreau actually appeared in an episode, so they're clearly pals with Rea.

The final episode's second guest founded the Momofuko restaurant chain (no big deal) and is the creator and star of the Netflix series Ugly Delicious.

That's it for Volume 2. As for hungry celebrities with gossip or blunders, fans are just going to have to wait for the show to get picked up for another season. Maybe then, Favreau can set the table for more of his famous friends.