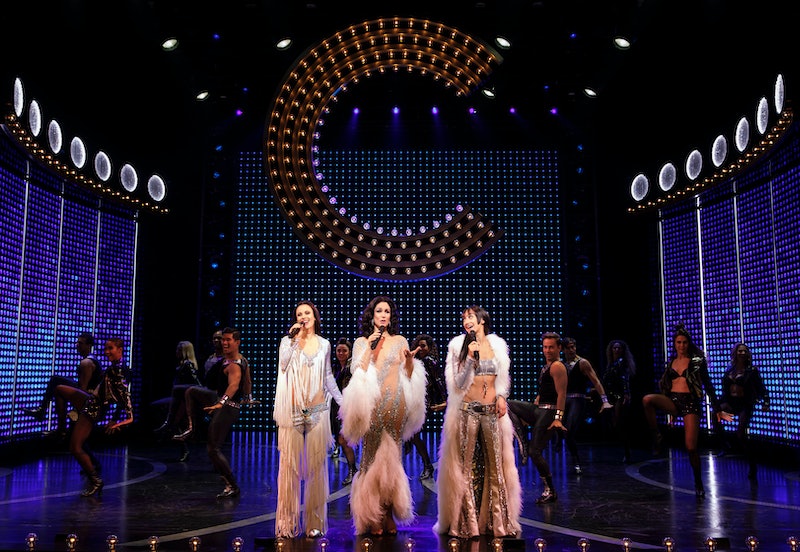 The Cher Show on Broadway takes one of our most enduring, powerful, badass divas and turns her story into a lesson about being kind to yourself. Using three actors — Stephanie J. Block, Teal Wicks, and Micaela Diamond — to portray the iconic singer at different eras in her life and career, the biographical musical is also influenced by Cher herself; the artist is a producer on the show and worked with writer Rick Elice to develop the book. Needless to say, it was a bit nerve-wracking for the three actors portraying Cher to step into her shoes.

"When they approached me for this project, I was hugely intimidated and you can even use the word scared," says Block (who plays "Star," the most recent version of Cher), speaking over the phone. "I just didn't want any part of playing this really beloved woman." When audiences watch an actor transform into someone they already know and love, Block explains, "it's very difficult then to break the expectation and allow the story to get through."

Still, the actors all recall how Cher told them when they met that she doesn't see herself as "tough," breaking down at least one barrier to playing her. "I don't think she would consider herself intimidating, but she is," says Wicks, who plays "Lady" (the Cher who embraced her financial and creative independence in the '70s). Adds Diamond, who plays "Babe" (aka the young Cher who was discovered by Sonny Bono), "The way she thinks of herself versus the way people see her is so fascinating and different... she thinks of herself as very feminine. We would get flowers backstage from her that were like, baby pink and white, and yet people think of her in this fierce leather coat, or wearing nothing."

Casting three actors in a biographical musical to represent the different stages in one person's life is a recent theatrical trend, with other examples including Summer: The Donna Summer Musical and Fun Home. However, The Cher Show does things a little differently, by breaking the conventions of time and space to allow the three Chers to talk to one another and give advice/support from the past, present, and future.

"We call it 'Cher-apy,'" explains Diamond. "It's so special because the three of us have gotten so close and it really does become women helping other women and lifting them up and watching them grow." One surprising scene in The Cher Show even depicts Cher consulting Lucille Ball for advice on divorcing Bono despite him having creative and financial control over her career. It was a real moment (at the height of her career with The Sonny and Cher Show in the early '70s, Wicks explains, Cher "didn't own anything that she earned" because she was married to Bono) that, Block says, the singer insisted be shown in the musical.

"She was friends with Lucille Ball and she thought, 'who better to speak to than [one half of] Desilu Productions?'" explains Block, noting that like Cher, Ball also publicly divorced a mega-famous husband (Desi Arnez). "Who else do you just pick up the phone and say, 'I'm a mega star and I'm breaking up with my mega star husband? We're not going to have a TV show anymore, and the public view — it's going to be all this upheaval because they think we're perfect together.' You can't just call anybody!"

The risks that Cher took, and her willingness to keep reinventing herself, shine through in moments like the Lucille Ball scene. "[Cher] said she's like a bumper car," says Wicks. "She would go full speed, hit a wall and instead of crashing, she would be a bumper car and just hit it and then turn and go a different direction with just as much gusto and speed."

Cher is also, as the Broadway show points out, always three steps ahead of whatever joke someone may want to make about her height, heritage, or attitude. "I think it's just her brazen truth," says Wicks. "She just speaks her mind, and for some of us that becomes very intimidating because a lot of us are like, 'Oh, I could never say that. Oh, I have a little filter before words just fly out of my mouth.' But Cher has lived long enough and worked her ass off hard enough to not really have that filter."

Playing someone as confident and accomplished as that, eight times a week, has been freeing for the Cher Show's cast members. "I was really, really concerned and anxious about my physical look and her physical look," says Block. "I'm of a certain age, and to try to pull off these gorgeous costumes, or to try to pull off her absolute confidence in her physical person — that is not something that I in my life have been able to really embrace until now. Now, all of a sudden, me playing Cher has allowed me to be kinder, more loving, more understanding with my own self. And that was something that I couldn't even foresee."

With a Broadway musical, a significant role in 2018's Mamma Mia: Here We Go Again, a Kennedy Center Honor, and more albums on the way, Cher is having a major moment these days, but really, when is she not? Whether "I Got U Babe" has been your karaoke favorite for decades or you only got into the singer's music more recently, you've likely seen just how special Cher is for so many people. As The Cher Show's stars attest, she's an example that it's possible to be shy and strong, feminine and tough, and speak your mind — even if that means hitting a wall from time to time.