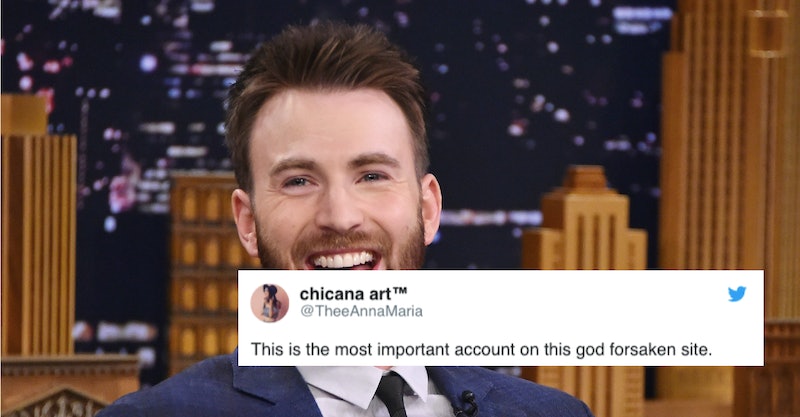 It's 2018, and by virtue of that, we all have strong opinions about the website known as Twitter dot com. We love it, we hate it, we love to hate and hate to love it — however you feel, it is inextricably a part of the millennial narrative, and in the current landscape, very hard to avoid. Enter one adorable solution, which is here not only to soothe all of your Twitter woes, but water your crops, clear your skin, and perfect the ratio of burnt cheese on all your future grilled sandwiches: someone has launched a "Chris Evans as Golden Retrievers" Twitter account, appropriately dubbed @retrievans, and it is the purest thing the internet has ever done.

Arguably, in this day and age, there are only but two things that can soothe your maelstrom of rage/despair/existential internet confusion, and they are tweets from Chris Evans, and tweets about dogs. On more than one occasion, Chris Evans has recklessly played with the fragile fabric of our universe by tweeting about his dog, which up until now was the height of what our hearts could handle. Enter this new Twitter account: launched in September 2018, each tweet from "Chris Evans as Golden Retrievers" delivers on its promise, offering weary Twitter users an image of Chris Evans, alongside a matching retriever.

I'm not sure if that squish I just heard was my heart or my uterus, but either way, I'm in danger!!

Bury me with screenshots of these tweets.

Honestly, these are art. Install a Twitter feed in the Louvre. Make it scroll these pictures all day long. Let the people bask in its glory.

When I get kicked out of the office today it will 11/10 be because I couldn't pull myself together after howling about this guitar situation.

One more and I swear, I SWEAR I'm done.

Unlike Captain America, the hero behind this account is anonymous — but much like Captain America, they are doing the kind of public service that can truly never be repaid. As of press time, the account has already racked up a whopping 3,000 followers, so clearly the gospel of Chris Evans as a dog is spreading fast. And truly, the tweets about it will warm your heart every bit as much as the photos themselves.

But this, of course, begs the question — what's next? Tom Holland as shih tzus? Oscar Isaac as goldendoodles? John Boyega as beagles? I am just spitballing here, friends (granted, spitballing is an intentional misspelling of "in dire need of immediately"). Basically, we need accounts of all internet boyfriends as puppies, and WE NEED THEM NOW.

In the meantime, we can bask in the glow of the fact that I lied before, I'm not done, and here, have another Chris Evans dog.

Anyway, if you're looking for love, light, and grownass men who look vaguely reminiscent of puppies, @retrievans has your back and then some. And just in case that's not enough, Chris Evans himself has that #content you crave rolling out today, too.

Honestly, y'all, what did we do to deserve Chris Evans and dogs?